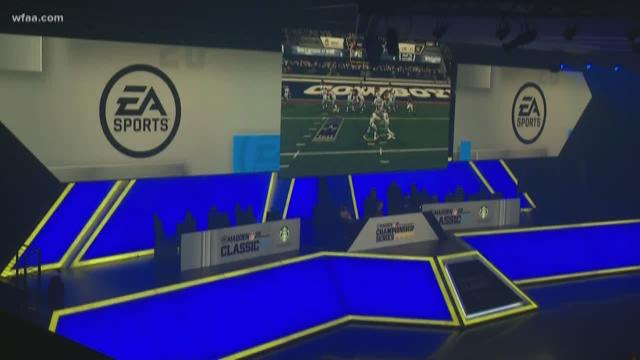 ARLINGTON, Texas — More than 500 video game players flew in from all over the country to get their share of $190,000 in prizes at the EA Madden Classic.

The Esports Stadium in Arlington's entertainment district is hosting the 3-day tournament for the first time.

“This is bar none, far and away the best venue I’ve ever been to in my life,” said Tony Montagnino of Austin.

In addition to the prize money, contestants are vying for spots in future EA tournaments. They'll also enjoy an action packed weekend all within walking distance.

The tournament overlaps with a Texas Rangers homestand and The Advocare Classic college football game between Oregon and Auburn. That means hundreds of gamers will mix with tens of thousands of baseball and football fans all within a one-mile radius.

“There’s just a lot of stuff going on,” Montagnino said.

Traffic and parking can create some headaches, but organizers encourage fans of esports and regular sports to be prepared for backups and show up to their events early.

Getting a head start is also important for gamers who have to go through tight security to get into the tournament.

The event comes almost exactly one year after violence broke out at a similar Madden tournament in Jacksonville, Florida, where a shooting left three dead, including the gunman and two gamers.  Almost a dozen people were injured.

RELATED: 3 dead, including gunman, after shooting at Madden tournament in Jacksonville, Florida

Organizers of this weekend’s event in Arlington say they’re confident in the security and are looking forward to a fun tournament.

“We think we’ve done a great job today, putting any sort of concerns at rest,” said Matt Marcou, Madden competitive gaming commissioner at EA Sports. “You have to have a secure environment.

He says now, instead of worrying about safety or traffic, the gamers can keep their hands on the sticks and their eyes on the prize.