Fort Worth boy raises $75,000 to help give others hearing aids

Braden's campaign is about more than helping people hear. It's about inspiring people to find their voice. 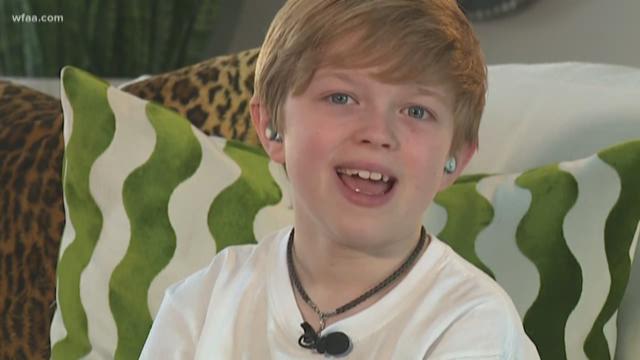 FORT WORTH, Texas -- Braden Baker, 11, has always loved solving problems. He has an impressive Rubik's cube collection in his Fort Worth bedroom.

He never thought that when his dog, Chewy, ate his hearing aids twice, it would inspire him to solve a problem for hundreds of people, when his mom, Ashley, told him how much hearing aids cost.

And that hit home for Braden, who has been wearing hearing aids since he was a baby. "It was kind of like, 'What are you going to do about this?'" said Braden.

So he started a GoFundMe page, and started posting YouTube videos, with the goal of raising $1,000 for people who couldn't otherwise afford hearing aids.

In the nine months since, he's raised $75,000 for the Oticon Hearing Foundation, which helps bring hearing aids to those in need.

For his 11th birthday last fall, Braden went to Guatemala and watched as 100 hearing aids transformed people's lives. Some danced to music for the first time.

In January, 450 people in Mozambique, Africa got hearing aids, thanks to Braden.

He's also helped people at multiple hospitals in the U.S., including Cook Children's in Fort Worth, where Braden himself has received treatment.

Months after he started his campaign, The Ellen Show flew him to Los Angeles to meet his idol, and gave him $20,000 for his mission.

And Braden isn't done yet.

Next Saturday, he's giving a Ted X Talk in Garland. He'll speak at We Day in North Texas Tuesday. He hopes to go to Zambia next. And he has a new goal, of raising $100,000.

"Find your purpose and do something with it," said Braden, reading the saying on his shirt, from original artwork.

Braden's campaign is about more than helping people hear. It's about inspiring people to find their voice.

"You can put an idea out in the world, even if you're young or old, and words can still be heard," said Braden.

And his, have been heard, loud and clear.

"I always knew some goodness or some kind of purpose was going to come out of this. I wasn't sure how or when but it happened," said Ashley Baker.

And Braden and his mom want you to know, that if a boy, born 65 percent deaf, found purpose in losing his hearing aids, you can find yours too.