Sources with the city say there will be a press conference at 1:30 p.m. Friday to make an “important economic development announcement.” Speculation is that the city and Texas Rangers have agreed on plans to build a stadium with a roof. 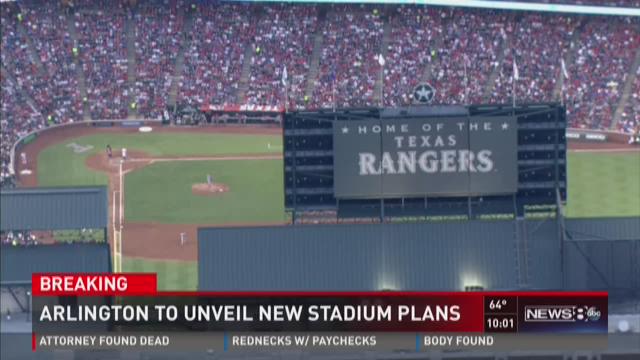 ARLINGTON -- The Texas Rangers and the City of Arlington have agreed to build a retractable roof stadium in the city, multiple sources tell News 8.

Sources with the city say there will be a press conference at 1:30 p.m. Friday to make an “important economic development announcement.” Speculation is that the city and Texas Rangers have agreed on plans to build a stadium with a roof that would be funded in part by a half-cent sales tax once AT&T Stadium, home to the Dallas Cowboys, is paid off.

The ballpark would cost approximately $900 million and be split equally between the city and the Rangers.

For the plan to move forward, voters will have to approve the use of tax money for a new stadium. The money will come from a tax that citizens are already paying.

Since construction began on AT&T Stadium, there has been a half-cent sales tax that went directly to paying off the debt for the Dallas Cowboys' new stadium. The original plan was to pay off that debt by 2035; sources tell us that the City of Arlington now thinks they'll have it paid off by 2020.

Officials with both the city and the baseball club declined to comment Thursday, including about a target construction date or location for the new park.

But Arlington officials have made no bones about their desire to keep the Rangers in town after the team’s lease at Globe Life Park expires in 2024. City leaders don’t like to talk publicly about it, but there have been rumors that business and political leaders in Dallas were trying to lure the team away.

“We need to show love for the Rangers right now, y’all, ” Arlington Mayor Jeff Williams told the Rotary Club of Fort Worth last week, speaking generally about the city’s desire to keep its team. “The Rangers don’t want to leave, but there are other cities, and we know one that starts with a D that wants to take it. … Right now is a key time for us.”

The Rangers are playing their 23rd season at Globe Life Park, which opened in 1994 and still enjoys a reputation for providing baseball fans the nostalgia of classic understated architecture combined with modern restrooms, concessions and luxury boxes. The ballpark has undergone several renovations and improvements over recent years, which has kept the park from feeling out-of-date. The only thing it lacks is air conditioning.

For many fans, the ballpark still feels new, although it is now the 11th oldest facility in Major League Baseball. Eighteen other clubs now play in newer stadiums, including six parks with retractable roofs and one with a fixed dome. Cleveland’s Progressive Field opened the same year as Globe Life Park, which was originally known as The Ballpark in Arlington.

The lack of a roof and accompanying air conditioning is considered one factor that can keep fans away from Globe Life Park, especially during the dog days of summer, when the temperature can stay in the mid-90s even during night games.

The announcement Friday will be made just a few hours before the Rangers are scheduled to begin a series with the Houston Astros, which has had a retractable roof stadium since 2000.