"I don't think that anybody had a playbook for what just occurred," said Robert Talamantez of Terry Black's Barbecue in Deep Ellum. 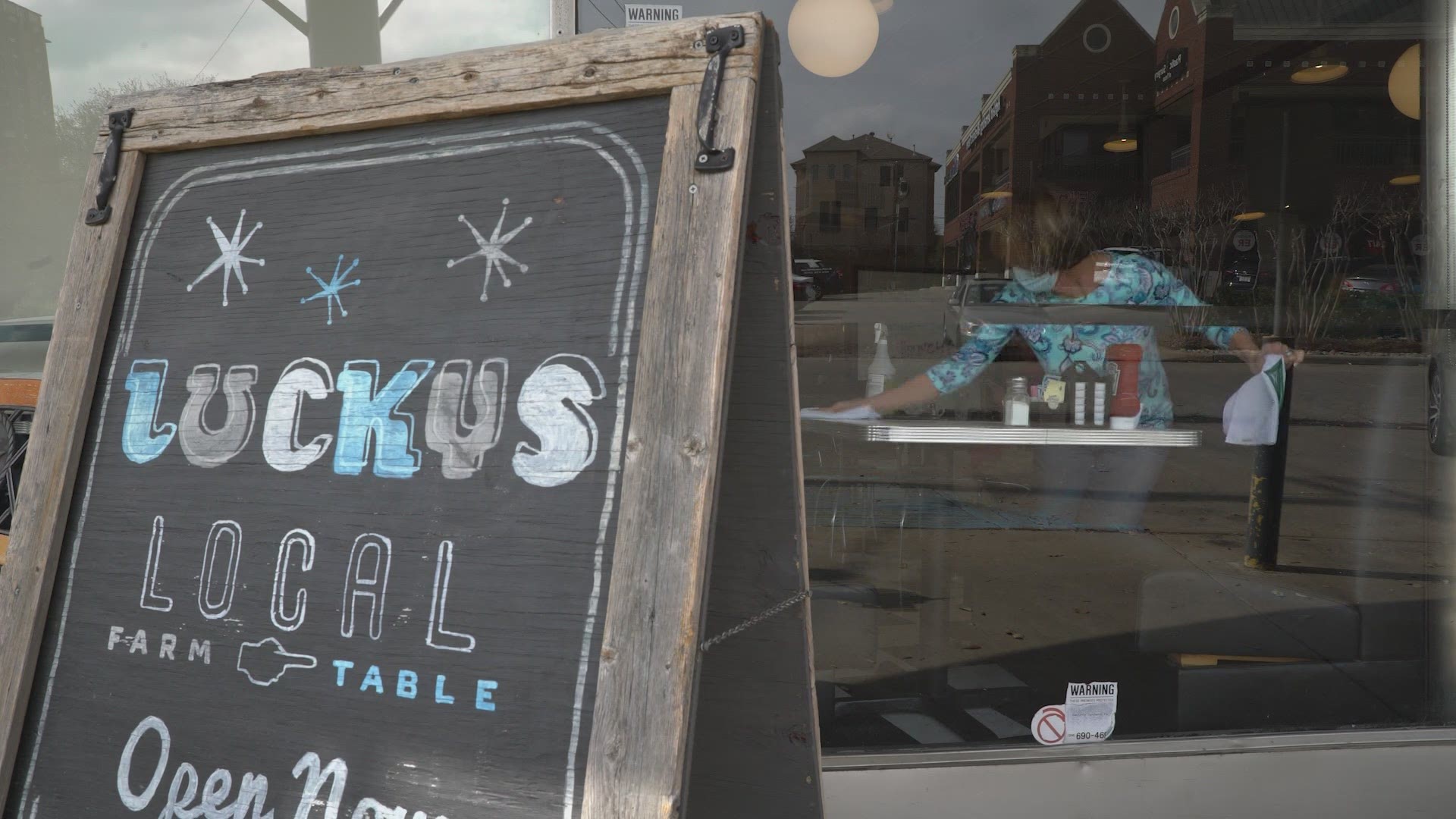 DALLAS — The pandemic has contributed to the closure of thousands of Texas restaurants. The survivors often consider themselves fortunate, while also remaining wary of the potential need to pivot again.

One year ago this week Judy Spiva, manager at Lucky's Cafe in the Oak Lawn neighborhood of Dallas, sat for an interview in the dining room mostly alone. It was the week restaurants were ordered closed. She and her staff were trying to figure out how to survive with delivery and to-go orders only.

"It's sad and I feel bad for all my employees that work here," she said at the time.

FROM 2020: Dallas restaurants scramble to stay in business and retain employees during Covid-19 shutdown

We profiled Twisted Root Burger Company that same day. With in-person dining banned the Deep Ellum location had only done $200 of business that one day.

The Taco Stop, a decade-old taco stand on Irving Boulevard in the Dallas Design District, the one that also offered free coats during the winter, was having trouble too.

So first, the good news: Lucky's Cafe is a survivor.

"It's been tough," Spiva said in an interview exactly one year later. "Every day was, are we going to be here tomorrow?"

They survived relying heavily on takeout and delivery, reducing staff at one point to just four employees, and installing multiple plastic partitions to separate diners once they were allowed to reopen. Now at 100% capacity again, business has returned with employees still wearing masks as a precaution.

"We're so fortunate to have our guests that are loyal and they kept us open," said Spiva.

FROM 2020: What's going on with Dallas' 50 highest-rated restaurants?

The latest estimate from the Texas Restaurant Association is that the pandemic led to the failure of more than 11,000 Texas restaurants. Twisted Root only made it until June, filed for bankruptcy at several of its sites, and now a different company owns 15 Twisted Root locations. The Deep Ellum site is scheduled to reopen under new management later this month.

And the Taco Stop didn't make it through the pandemic either.  Emilia Flores says she exhausted most of her savings by last August and decided to end her 10-year run. A different company, Tacos Bites & Beats, leases the property now.

"So I really stuck it out for a long time. But with the COVID and lack of Design District traffic, it was just unsustainable," Flores said of the business that tapered off when stay-at-home orders were in place and less people were physically traveling to the Design District. She said the decision was "based on financial health, but also my own mental health."

"I don't think that anybody had a playbook for what just occurred," said Robert Talamantez of Terry Black's Barbecue in Deep Ellum. The Austin-based company opened its Deep Ellum location at a challenging time: the November before the pandemic began. But with staff reductions, spreading out and reducing tables inside, and with a heavy reliance on take-out and delivery, survived to open this month at 100% capacity again.

FROM 2020: Now you can get Terry Black's Barbecue in Deep Ellum

But Talamantez said it wasn't easy.

"Every day it was a challenge as to what that day was going to consist of," he said of the Dallas location that is back to employing more than 60 people.

But the list of lost restaurants is long, and the damage still being counted.

'It's horrible. You think you could be the next one," Spiva said. "It just breaks my heart. I don't wish that on anyone."

Experts are predicting the collateral damage isn't over just yet.