The CDC said it is an ongoing outbreak and that additional infections have been identified since April. 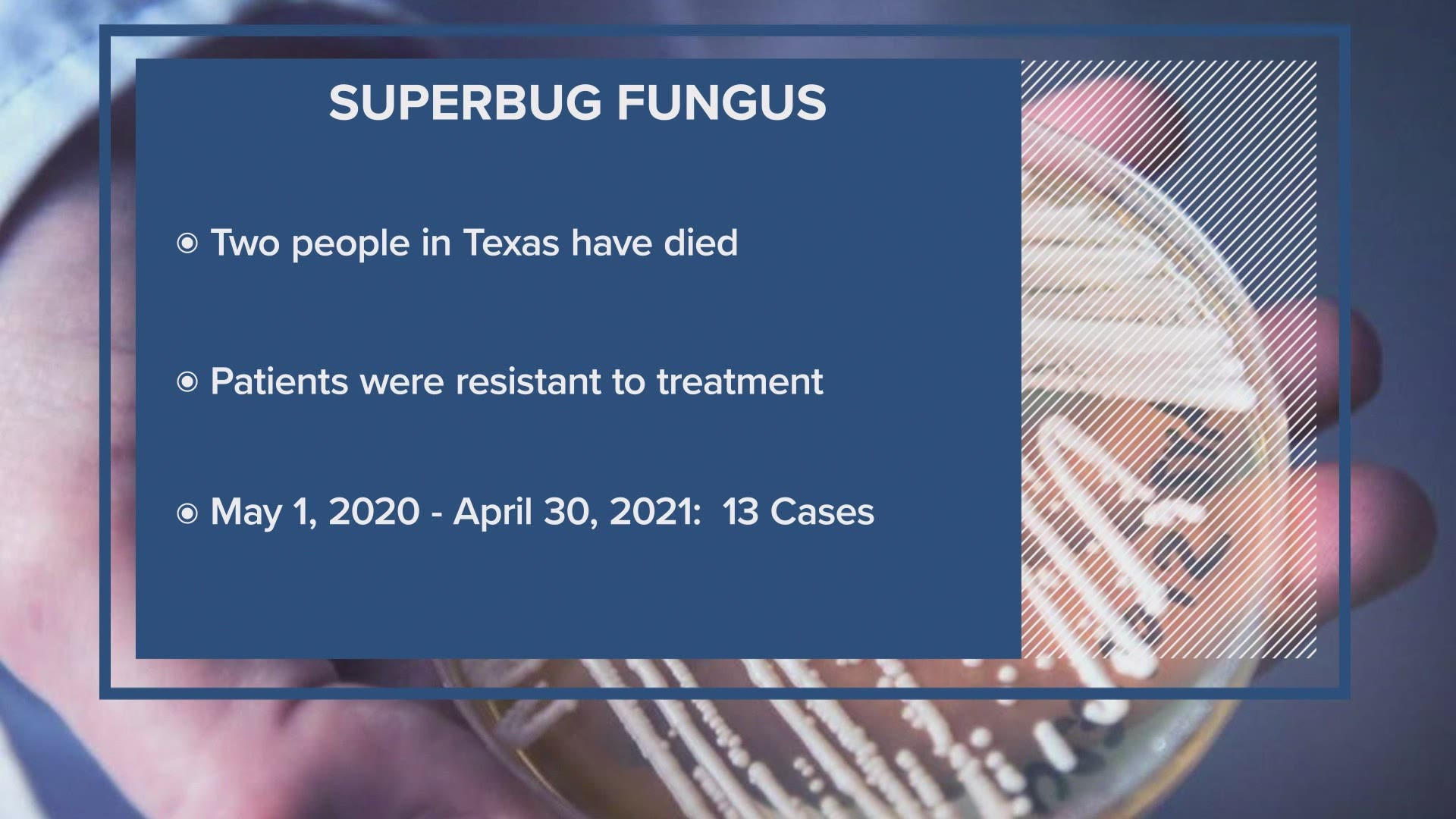 U.S. health officials say they now have evidence that an untreatable “superbug” fungus has spread in two hospitals in Collin County and a nursing home in Washington, D.C.

There were four deaths related to the fungus at two health care facilities in Collin County, officials said Friday.

Outbreaks of the Candida auris fungus were reported Thursday to the Center for Disease Control and Prevention. A handful of the patients had invasive fungal infections that were impervious to all three major classes of medications. The new cases did spread, the CDC concluded.

In Washington, D.C., a cluster of 101 C. auris cases at a nursing home dedicated to very sick patients included three that were resistant to all three kinds of antifungal medications. A cluster of 22 in two hospitals in North Texas included two with that level of resistance. The facilities weren’t identified.

The state health department told WFAA Friday that they occurred in Collin County.

The first reported case of a drug-resistant Candida auriswas received on January 25, 2021, the Collin County department said. Multiple health advisories were sent to hospitals and healthcare facilities in early 2021 as cases were identified. The department is working with the state health department and the CDC to control the spread.

Those cases were seen from January to April. Of the five people who were fully resistant to treatment, three died — both Texas patients and one in Washington.

“This is really the first time we’ve started seeing clustering of resistance” in which patients seemed to be getting the infections from each other, said the CDC’s Dr. Meghan Lyman.

Lyman said both are ongoing outbreaks and that additional infections have been identified since April. But those added numbers were not reported.

The fungus, Candida auris, is a harmful form of yeast that is considered dangerous to hospital and nursing home patients with serious medical problems. It is most deadly when it enters the bloodstream, heart or brain. Outbreaks in health care facilities have been spurred when the fungus spread through patient contact or on contaminated surfaces.

So how is it spread? A healthy person can be a carrier without knowing it, according to Texas Christian University professor Dr. Floyd Wormley.

Normal disinfectants won't always work against the fungus; you have to use cleaners and disinfectants that are proven to kill this type of fungus.

"So once you identify that the organism is in the setting you can take effective measures to decontaminate, to get rid of it, or to push it down," Wormley said. "But the tricky part is knowing that it is there."

The fungus causes disease but primarily to people with a severely weakened immune system.

"So I would say for the most part it’s not a huge concern it’s not a superspreader event that you all of a sudden where you’re going to start seeing all over Texas and all over the nation," Wormley said. "But it’s something that once it’s identified in your area, you may want to be looking out just to be making sure you’re OK."

Health officials have sounded alarms for years about the superbug after seeing infections in which commonly used drugs had little effect. In 2019, doctors diagnosed three cases in New York that were also resistant to a class of drugs, called echinocandins, that were considered a last line of defense.

In those cases, there was no evidence the infections had spread from patient to patient — scientists concluded the resistance to the drugs formed during treatment.

Investigators reviewed medical records and found no evidence of previous antifungal use among the patients in those clusters. Health officials say that means they spread from person to person.

The Texas Department of State Health Services shared a statement:

"DSHS issued a health advisory on March 16 notifying health care providers across the state of the two pan-resistant Candida auris infections from January and February and sharing infection control best practices. Since then, no additional pan-resistant cases have been identified in Texas. DSHS worked with Collin County Health Care Services, the local health department leading the investigation, to provide support, including visits to evaluate infection control practices and testing of people who may have been exposed."

Editor's note: A previous version of this article said they were two Dallas hospitals rather than "Dallas-area."