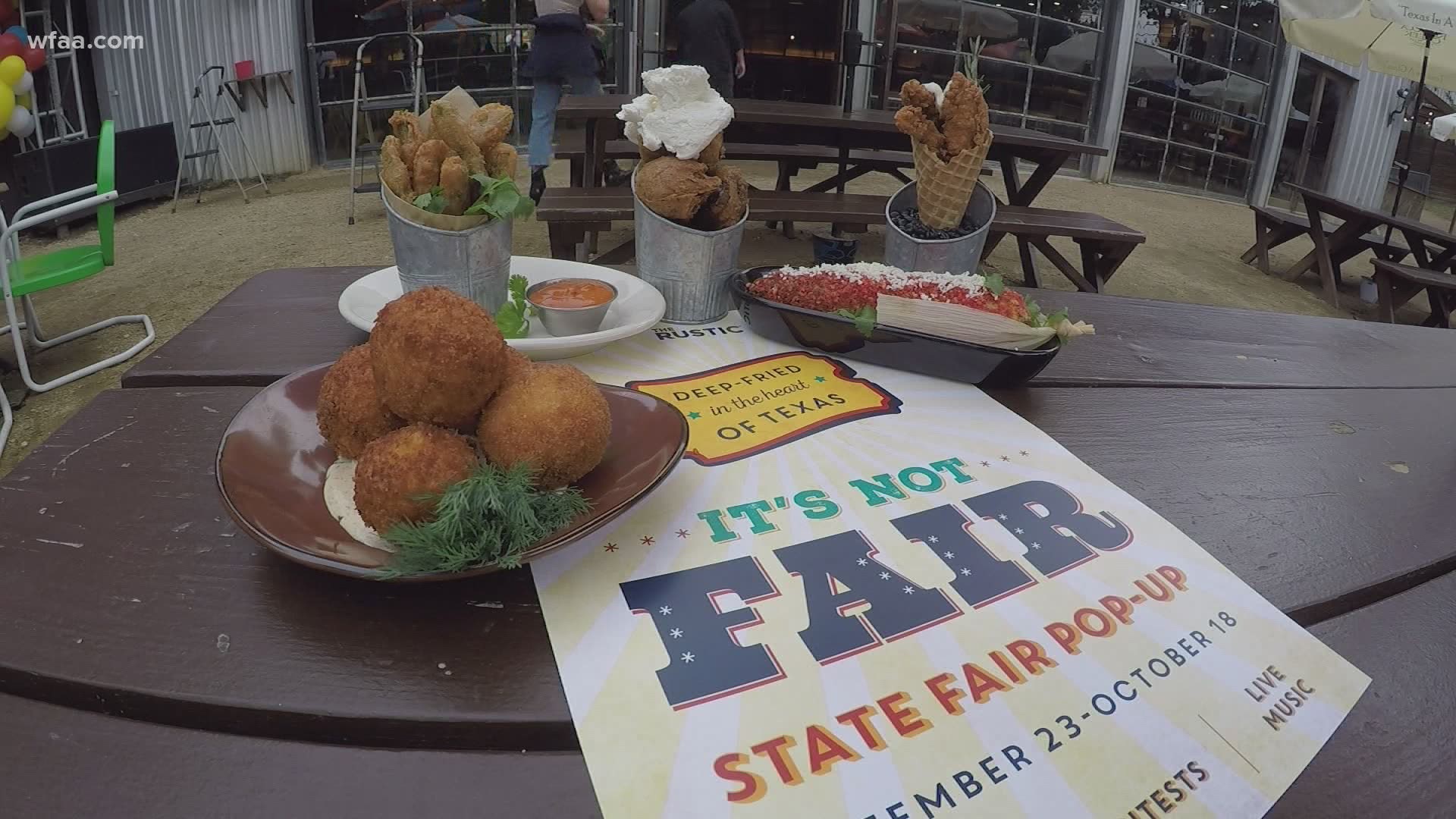 One of the biggest draws at the State Fair of Texas are the winners of the annual Big Tex Choice Awards for the newest fried food creations.

Unfortunately, with the fair canceled for 2020, vendors won’t have the opportunity to dish out their new treats until next year. However, hungry fairgoers can still get their hands on some creative concoctions.

“We lost the state fair. We wanna bring it back just to get us happy again,” said Kyle Noonan.

Noonan, who owns The Rustic in Dallas, says this time of year the happiest place on earth isn’t Disney World, it’s the state fair. For Texans, at least.

“If you live in Texas, you are an absolute fan of the State Fair of Texas,” Noonan said.

Now through Oct.18, The Rustic is hosting the ‘It’s Not Fair State Fair Pop-up,’ with plenty of games, food, and entertainment.

“We want people to come out and get some sense of normalcy and excitement that we’re used to in the fall, to give all Texans a little bit of that fair flavor,” Noonan said.

The Rustic has created its own deep-fried delicacies like brisket mac and cheese, pecan turtles with bourbon whipped cream, cactus fritters, a chicken and waffle cone and Hot Cheetos dusted elote.

Of course, no state fair experience is complete without Fletcher’s. The fair favorite will be slinging corny dogs several times throughout the pop-up.

You can also learn how to make elote with the recipe The Rustic provided below:

For the Green Chile Cream Sauce:

1. Using a blender, combine the chilies and the mayonnaise until smooth, approximately 30 seconds. Set aside until the corn on the cobb is cooked.

4 each shucked ears of corn

Salt, and pepper to taste

2. Remove the husks and silk from the corn before cooking.

3. Add corn and cook, turning often until charred all over, about 10 minutes.

4. Remove from grill and season with the salt, pepper, and tajin, making sure to season all sides of the corn completely.

5. Using a brush, apply the green chili cream over all sides of the corn.

6. Place the green chili brushed corn on the plate, sprinkle the corn with the cotija cheese and the crushed hot Cheetos.

7. Garnish with lime and cilantro leaves.