He’s no Big Tex, but a 17-inch cowboy is turning heads at the State Fair of Texas

Shorty McKoy is a puppet who entertains kids of all ages thanks to his skilled puppeteer. 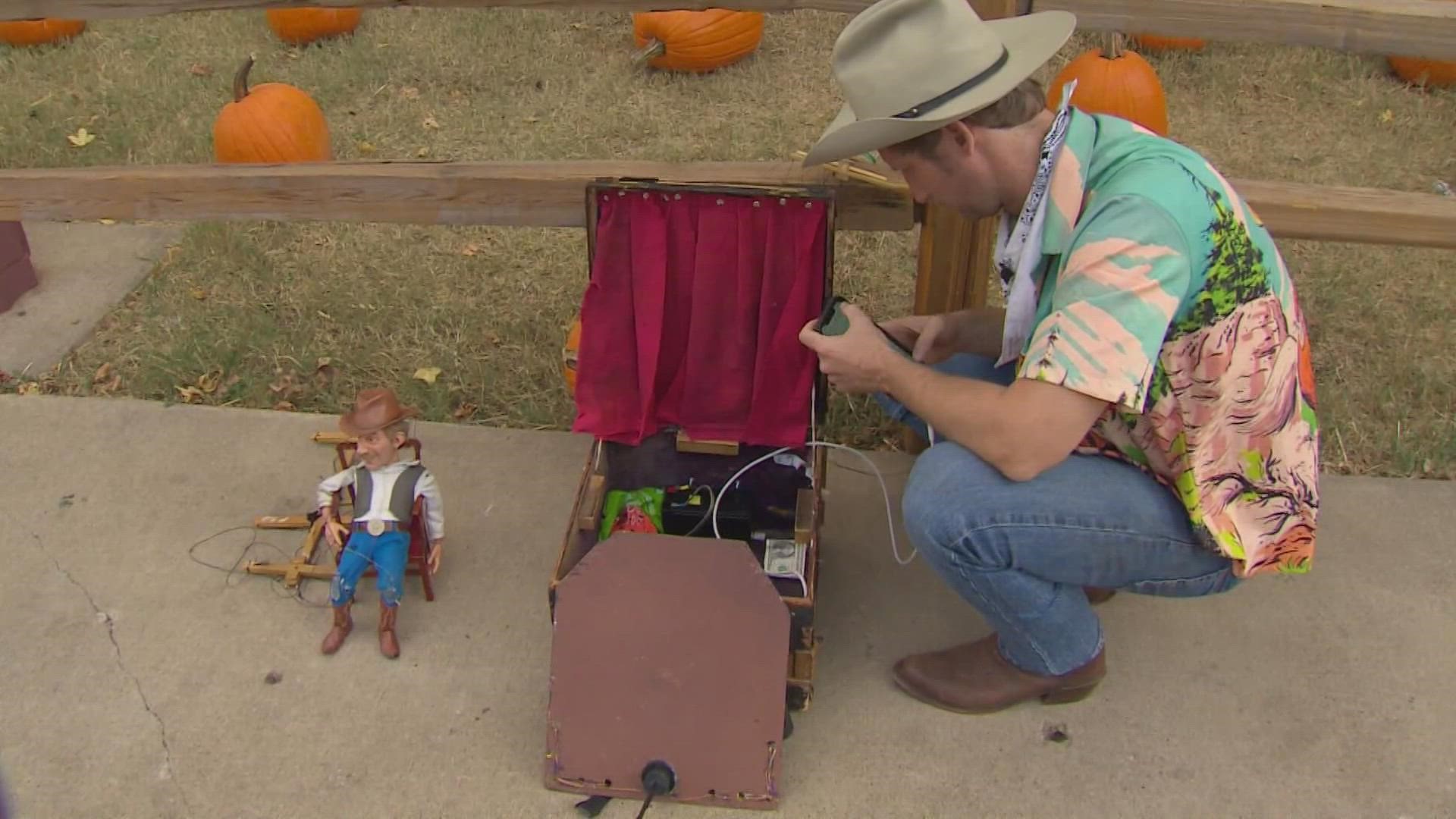 DALLAS — With a legend that looms far beyond the grounds of the State Fair of Texas, Big Tex could never be overshadowed or upstaged.

But around the bend from the 55-foot tall icon, a tiny cowboy named Shorty McKoy is drawing crowds, too.

Shorty doesn’t talk - but he can dance.

And that’s thanks to the talented Will Schutze, a puppeteer who brings McKoy to life.

RELATED: State Fair of Texas 2021: What are the best bathrooms at Fair Park?

“In a time when we’ve got a lot of things on screens to look at that are extremely well made and entertaining, it’s amazing that the magic of puppets can still catch people’s attention,” Schutze said.

Shorty and Sheriff Bonetangles are marionettes, but once Schutze begins to perform, they feel more like characters in an unscripted show.

Shorty is 17 inches tall, making him about 40 times smaller than Big Tex.

But like the big guy, Shorty wears a cowboy hat, jeans, boots and a belt buckle.

Sheriff Bonetangles is a skeleton dressed in black, armed with a tiny pistol, and smoking an even tinier cigar.

Shorty’s jaw doesn’t move, but the sheriff’s does.

So, through Schutze, Bonetangles puts on a classic country and western concert.

“No one’s looking at me,” Shutze said. "They’re looking at the puppets, and they’ve got a smile on their face. They’re wide-eyed and paying close attention."

Buford sits in a tree and talks to kids and parents who happen by during about a half dozen shows a day at Howdy’s Stage.

When Buford isn’t on, Schutze and the marionettes will put on random street performances.

Credit: WFAA
Puppeteer Will Schuze performs as Buford Buzzard at the fair.

Schutze said he fell into puppetry by accident.

The Dallas native was trying to make it as an actor when he bumped into the drama teacher from his alma mater, Woodrow Wilson High School, at a wedding.

Her husband was the State Fair’s original puppeteer, John Hardman. And Hardman needed some temporary help on one of his shows.

“She asked me to do it for a couple weeks and I said, ‘Oh yeah, I’d love to do that,’” Will recalled.

RELATED: Funnel cake and fried fun: Remembering Fernie, the queen of the State Fair of Texas

He thought it would make for a funny story to tell.

“And then it kind of took over and became my life,” he admitted.

About 13 years after he took on that temporary show, puppetry remains Schutze’s full-time career.

“I’ve met a lot of puppeteers who agree that you don’t choose to be a puppeteer, it chooses you.”

Credit: WFAA
Will Schutze at work.

He does shows across the country and has followed in Hardman’s footsteps appearing as Scrooge at NorthPark Center in Dallas every Christmas.

One of his California street performances caught the eye of film director Jon Favreau, who cast Schutze as a puppeteer in Chef, a 2014 movie.

Schutze acknowledged puppetry is an unusual art form, but he enjoys it. And it presents constant challenges.

“It is a lot of muscle memory,” he said. “I have to use my mouth sometimes to pull things with certain puppets. You do whatever it takes to make it work.”

RELATED: Your guide to the 2021 State Fair of Texas

Schutze has performed in many cities and states but said nothing compares to his annual three-week engagement at the State Fair of Texas.

“I’ve been coming to the fair since I was two weeks old. My parents brought me here and I haven’t missed a year,” he said.

“My little boy self would be extremely happy to find out I’m working here.”