Log rolling is a form of competition that dates back a century, back to parts of the country known for harvesting timber. 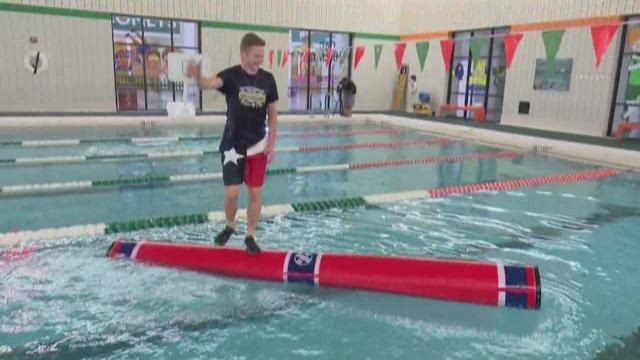 UT Dallas Senior Stephanie Duong is filling a 12-foot long floating piece of synthetic timber with water. When it's full, it will replicate the movement of a large tree floating in a river.

"It's a combination of balance, concentration, speed -- it's just about everything mixed in one," Duong said.

For the past year, she's helped introduce students on the UT Dallas Campus in Richardson to the sport of competitive log rolling. Friday morning she got some help from two national champions -- 9-year-old Caiden Poupore and his 15-year-old brother, Carson.

The Poupore Brothers each won the log rolling competitions of their respective age groups during the Lumberjack World Championships in Hayward, Wisconsin earlier this month.

It's a sport the two brother picked up in Wisconsin before the family moved to Texas.

Log rolling is a form of competition that dates back a century, back to parts of the country known for harvesting timber.

"They didn't have the machinery to move the logs like we do today, so they had to use their feet," Carson Poupore said.

Caiden and Carson are ambassadors for a sport they're attempting to spread to Texas.

"I hope to teach them good enough, so that they can consider it a fun sport to the point where they can do it where they don't think they're just working to be working," Caiden Poupore said.

The rules haven't changed much in a 100 years -- two competitors stand on one log until one inevitably goes flying off. No physical contact between the contestants is permitted.

With a little coaching, Duong begins to hold her own.

"They did great, definitely did a lot better than me, but I'm working on getting to their level," Duong said.

A new skill she'll take to Missouri in September for her first official competition representing UT Dallas. The hope is her young instructors will give her an edge in an age old competition.