A permanent memorial to Sherin Mathews will be dedicated this weekend at Restland Cemetery. 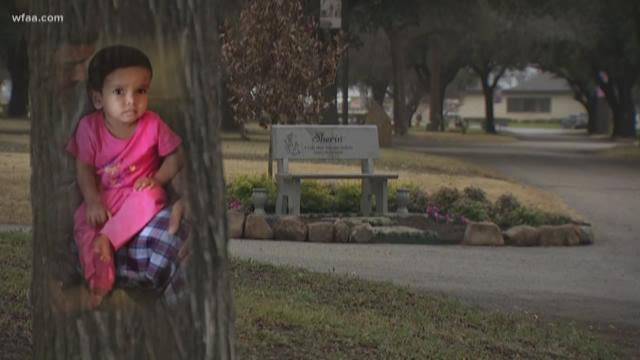 A permanent memorial to Sherin Mathews will be dedicated this weekend at Restland Cemetery.

The memorial was created by community members who didn't know Sherin in life but were affected by her tragic death.

In the days and weeks after Sherin went missing and her remains were eventually found in a culvert, a makeshift memorial grew as people left flowers, stuffed animals, candles and other tributes to her. Those items quickly became tattered and were removed in November.

The memorial is not a grave site, but it is intended to serve as a permanent location for the community to reflect and grieve. It features a granite bench with Sherin's name and an epitaph that reads, "A life that touches others goes on forever."

The bench was donated by Gene Champagne. Back in October as the Mathews story was unfolding, he won a granite bench in a raffle at a ribbon-cutting ceremony for Worthington Monuments in Colleyville, Texas.

"I won that for a reason," Champagne said. "It just so happens that that night, I went home, sat down and saw there was a story on the news about Sherin again. I thought it would be a nice thing to do to put that bench for her."

Champagne initially hoped to put the bench in a city park, but he said regulations would not allow it. After posting his offer online and connecting with others interested in a permanent memorial, Restland Cemetary offered a piece of land for the bench.

In a corner of a section of the cemetery dedicated to young children, they landscaped an area for the bench. Dave Turnblad with Restland helped come up with the words engraved in the stone.

"We really tried to find something that fit the situation," he said. "It just seemed right."