When we met Kaden Newton at his home in Rockwall, the 7-year-old was sitting on a case of Chef Boyardee spaghetti and meatball cans stacked next to dozens of boxes of Kraft Mac n’ Cheese and Bisquick pancake mix. 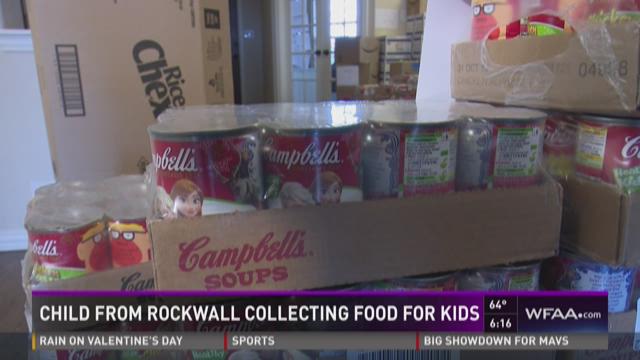 ROCKWALL, Texas -- When we met Kaden Newton at his home in Rockwall, the 7-year-old was sitting on a case of Chef Boyardee spaghetti and meatball cans stacked next to dozens of boxes of Kraft Mac n’ Cheese and Bisquick pancake mix.

There was much donated food that his mom had to move boxes of vegetable oil if she wanted to get to the baby grand piano in their living room.

"It's cool that we have this much food here,” Kaden said.

Cool, because it was all his own doing. Kaden’s mom says that as early as the age of 4 he wanted to help people less fortunate. So, on a family trip to the food pantry at the Helping Hands organization in Rockwall, he noticed what he thought was a problem.

"It was not like kid-friendly,” he said of the food he found on the shelves. “They didn't have like Chef Boyardee or pancake mix.”

With his parents’ help,he started his own non-profit company. He called it Mac & Cheese and Pancakes.

"Those are my two favorite foods,” he said.

They asked friends and family to donate, advertised on social media, and made an Amazon wish list. Mac & Cheese and Pancakes went viral.

And in just 10 days, delivery companies made visit after visit to the Newton home. And by Monday morning, the living room was stacked halfway to the ceiling with all of Kaden's kid-friendly foods.

Before the Helping Hands trucks arrived, Kaden explained his reason for doing this.

"It made my heart feel happy,” he said. "It will always makes me feel happy."

And after an hour of loading trucks his heart, and two trucks were full.

"It's awesome,” he said while carrying yet one more box of mac n’ cheese. "It's even better. It's awesome."

Yes, it's awesome. But then again so is he.

And after the Helping Hands trucks left with their full load of donated kid-friendly food, the afternoon shipment from Amazon delivered even more food to the Newton home. It will be donated too. And if you’d like to keep the mission of Mac & Cheese and Pancakes going, you can find more information here.