SMU student-athletes march on campus in support of Black lives

"At SMU, where the privilege is abundant, we need to make sure we're using our privilege for human rights messages," student Tyne Dickson said. 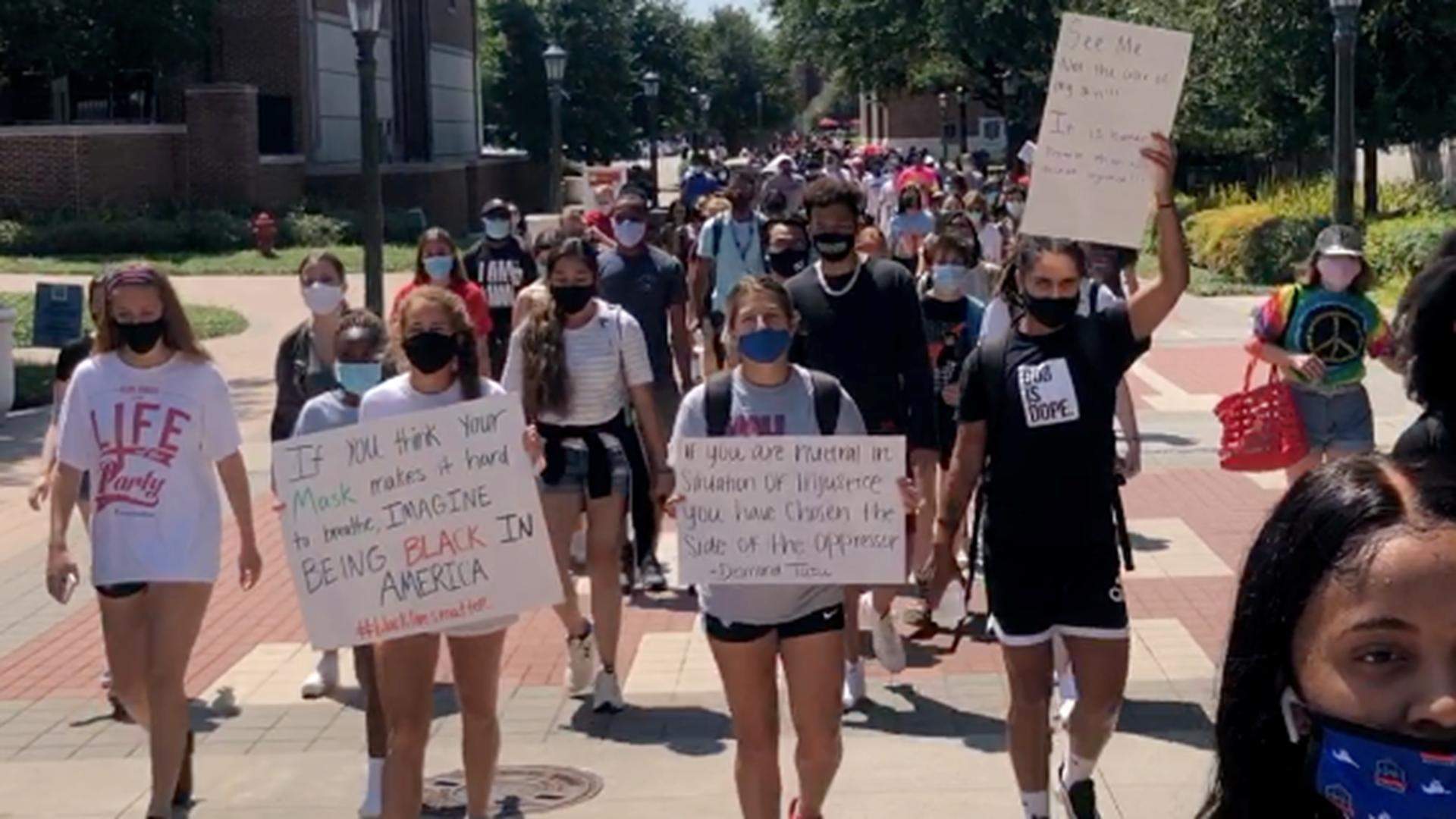 Updated at 4:54 p.m. with reaction from a high school athlete.

A group of Southern Methodist University student-athletes organized a rally and march on campus Friday in support of the Black Lives Matter movement.

The group, which included students, athletes, and school and athletic department staff, marched around noon from Dallas Hall to Loyd Athletic Center and back.

According to junior Tyne Dickson, who attended the event, the group plans to hold another protest Sept. 5.

Dickson said the identity of those students isn't solely that of athletes.

"They are still Black on and off the field," Dickson said after the march.

She said university leadership should support them.

"At SMU, where the privilege is abundant, we need to make sure we're using our privilege for human rights messages," Dickson said.

In the profile bio, the group says its goals are changing the campus culture, helping students participate in the Black Lives Matter movement, and uplift, celebrate and give space to Black voices.

SMU President R. Gerald Turner addressed the group to show his solidarity and support, according to university officials.

According to the student newspaper, a number of other school administrators joined the march, including Chief Diversity Officer Dixon Hall and Vice President of Student Affairs K.C. Mmege, as well as Athletic Director Rick Hart and Head Football Coach Sonny Dykes.

Dickson said she wants the school administration to recognize racial disparities on campus "because we've had these problems for 50 years now since desegregation."

SMU was not the only college to have athletes demonstrate Friday.

At Oklahoma, the team chose to forgo practice in lieu of a march, which include players and staff.

Protests were also reported at Ole Miss, LSU, and Kansas.

The Ole Miss football team and coaches walked to the Oxford town square Friday to protest police brutality and call for racial justice.

“They’re D1 athletes,” Arlington Martin High School senior Morice Blackwell Jr. said. “That inspired me, like I want to be a D1 athlete. So I see them marching. So they actually care.”

“I'm a young Black man,” Blackwell Jr. said. “I can tell when people that’s not like me, look at me some type of way. It just hurts sometimes.”

Blackwell Jr. is a linebacker who committed to Texas.

“I'm sick and tired of it, and I wish it could stop," he said Friday. "And it's time for a change because we have bigger things to worry about. It’s nothing different between the body and the soul, and everyone has (both), so. It’s no different.”

“I have hope. I have a lot of hope. I pray every day for a change.”