State troopers and Dallas police officers tried to disperse the crowd with tear gas and flash bangs early Saturday after a squad car was set on fire. 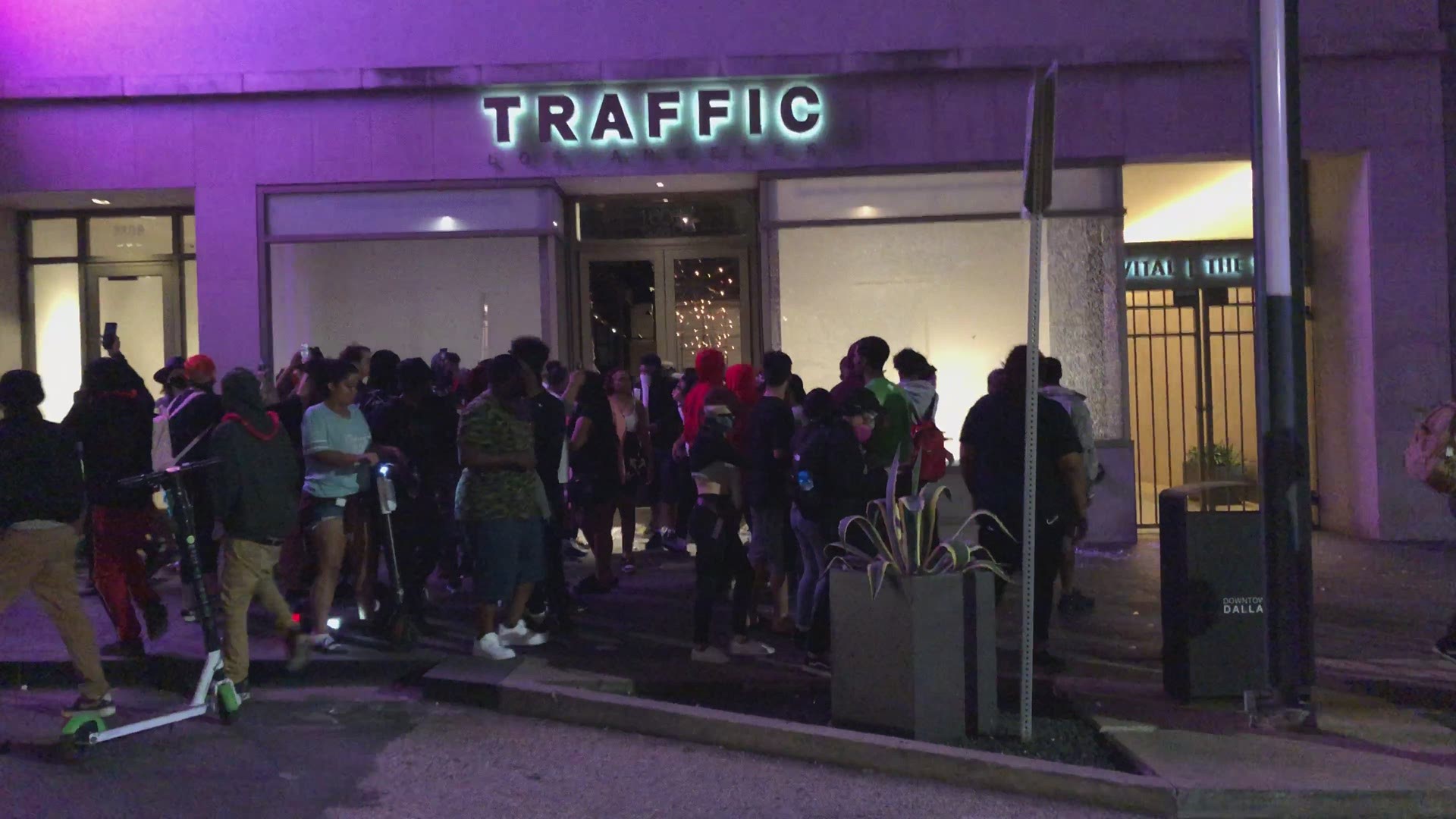 Updated with details as protests continued into Saturday.

Dallas police officers and state troopers set off tear gas in the downtown core after protesters set fire to a squad car and refused to disperse.

Dallas police sources told WFAA they were bringing in arrest teams just after 1:30 a.m. Saturday after what began as a peaceful protest on Friday, turned destructive.

Damage was reported at a number of businesses in downtown Dallas, and a small group of protesters remained active into Saturday early morning hours.

On Main Street in Dallas, police employed flash bangs and tear gas to try to disperse crowds around 1 a.m.

SWAT teams were called in after a group of protesters caused damage to a number of businesses in the area and wouldn't leave.

The Texas Department of Public Safety was on scene in downtown Dallas to provide assistance for police as needed.

Some of the businesses downtown that had windows broken and, in some cases merchandise taken, included a McDonald's at Commerce and Griffin streets, Neiman Marcus, Queso Beso, a 7-Eleven and a shop called Guns & Roses.

Damage wasn't only reported in downtown. Some businesses in the Deep Ellum neighborhood also were struck by protesters.

Among the targets -- a skate shop that had its windows smashed and a sneaker store that suffered broken windows and had its shelves emptied.

The protest initially began around 6:30 p.m. when hundreds gathered in front of police headquarters. The large crowd stayed in place for almost two hours before beginning to march through the downtown area.

Things became heated a couple hours after the demonstrations began, when a small group of the marchers clashed with Dallas police in riot gear at the corner of Griffin and Young streets.

Live WFAA video from the ground showed a group of protesters jumping on and pounding on a squad car. At least one police vehicle had spray paint along its side. Protesters damaged multiple Dallas police vehicles during the clash. The tires of multiple squad cars were slashed and windows were broken. And a group gathered in the intersection, refusing to move for an extended period of time. 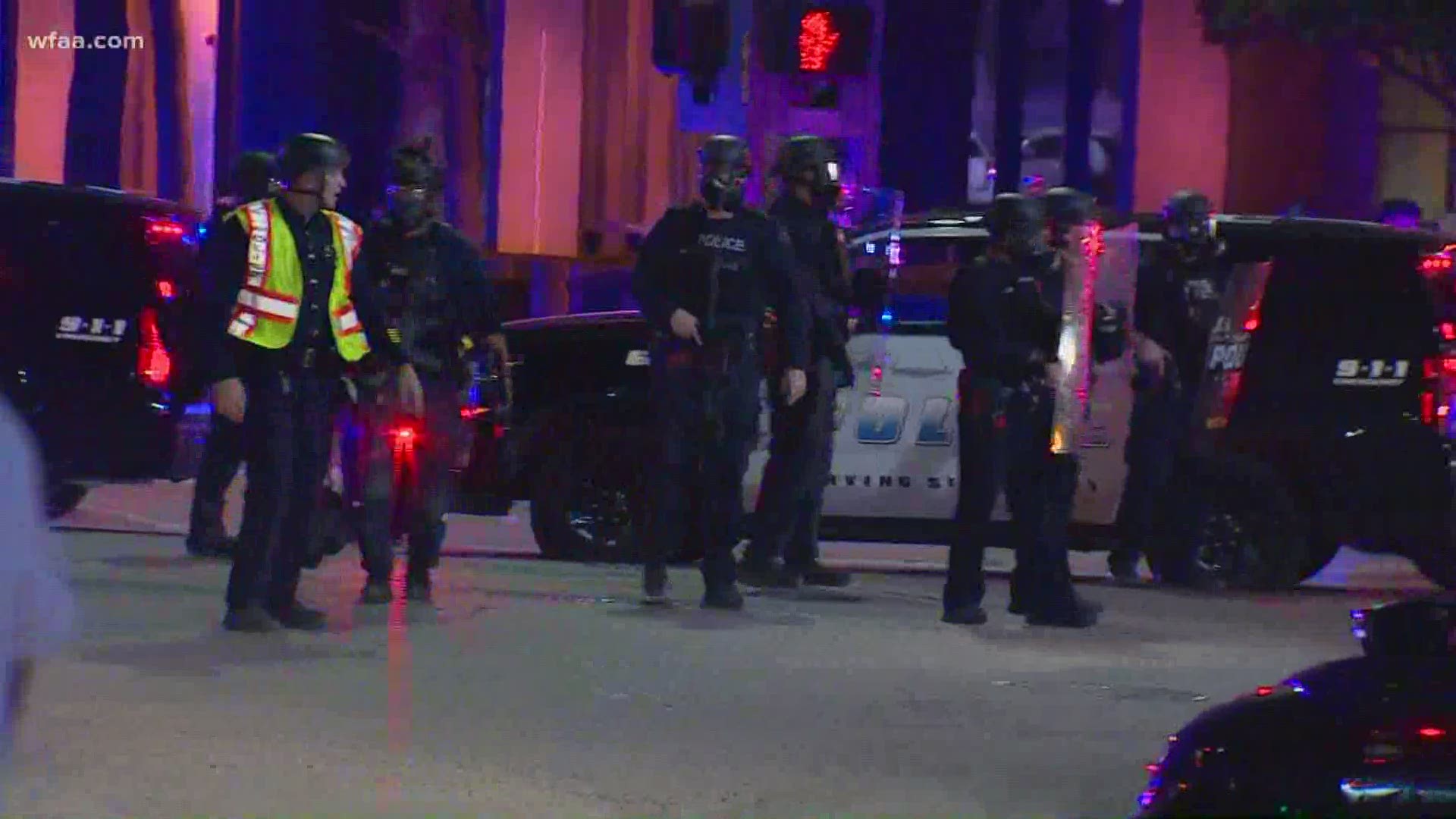 "If you do not disperse, you will be arrested," police told the crowd gathered in the intersection.

Some protesters also threw rocks at the police. Police confirmed they fired tear gas into the intersection after a small group of protesters refused to leave.

WFAA's Rebecca Lopez said the police also used concussion grenades on the crowd, which also broke out the windows of a Dallas Area Rapid Transit bus.

RELATED: 'I can't breathe': Protests in honor of George Floyd, Breonna Taylor take place in downtown Dallas and Fort Worth

Dallas Police Chief U. Renee Hall was at the protests and spoke to WFAA Friday night.

"We had a peaceful protest of probably 600 or more people," Hall said. "We were ensuring that they were safe and had the right of way in the streets. All of a sudden, there were bricks being thrown at officers, bottles of water [being thrown], one of the squad cars took a brick."

Hall said one of the tires to her own police SUV was flattened after she was almost hit in the head with a flying brick. 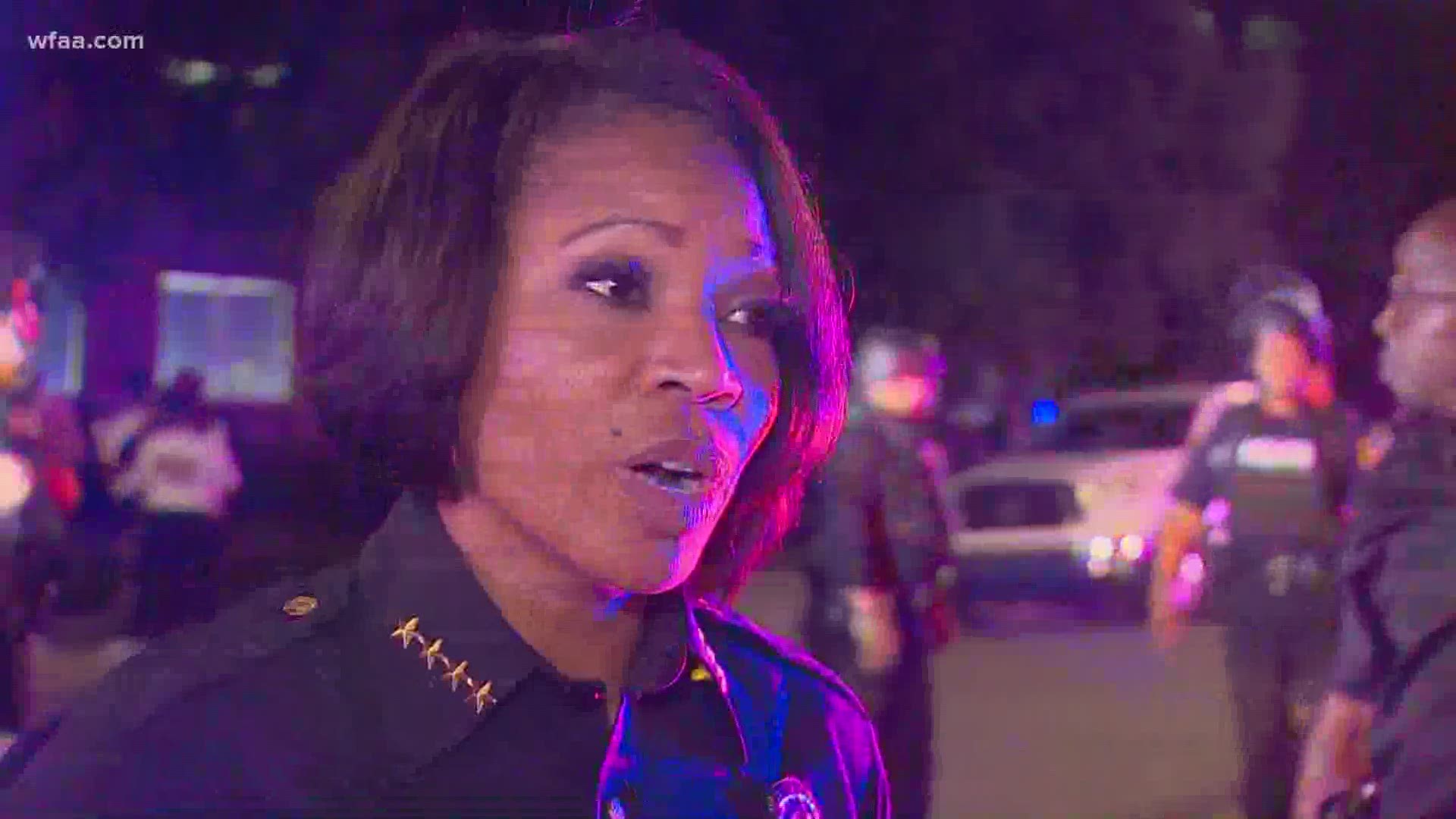 Protesters also ended up briefly shutting down traffic on Interstate 35-E when they walked onto the highway. No injuries were reported from that incident.

Dallas police had reported no protester injuries from the march, but said one officer was injured during the protest. The officer was treated by Dallas Fire-Rescue for non-life threatening injuries.

At least one protester was arrested — Dallas police took a person into custody late Friday night for riding a bike through a police line.

Dallas Mayor Eric Johnson had urged the protests to stay peaceful, saying on Twitter, "I understand the outrage, and I feel this pain deeply. What happened in Minneapolis is unacceptable. But please, remain peaceful."

He tweeted again Friday night, saying, "The protesters in Dallas tonight have largely been peaceful and respectful. I fully support their calls for justice. But we have a small handful of people who apparently have other agendas and have been destroying and stealing property. We can’t have that. It honors no one."

Hundreds of protesters marched through downtown Dallas Friday in honor of George Floyd and Breonna Taylor. A small group continued through the streets into the early hours of Saturday morning and another small gathering remained in front of police headquarters until just before 1 a.m.