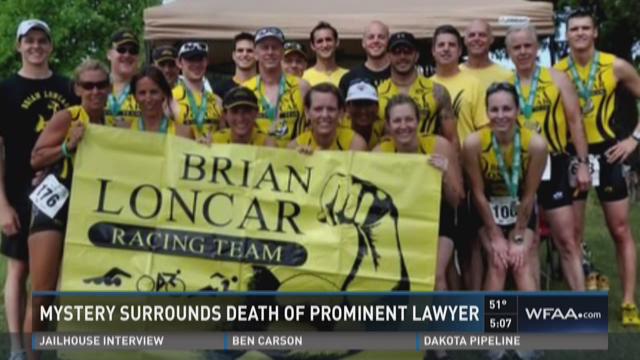 There was police activity outside Loncar's Dallas law offices Sunday morning, though it was unclear if that's where he was found.

His daughter, 16-year-old Grace, took her own life Nov. 25 after bouts with depression. She was a junior at Booker T. Washington High School.

Grace was laid to rest Friday.

The Loncar family released a statement to News 8 Sunday evening:

“Our family is filled with enormous sadness and profound grief following the death of our beloved son, husband, father, friend, colleague, neighbor, advisor, and a man trusted by many people in Dallas and throughout the state of Texas. We are shocked and numbed by these tragic events and ask the community and the news media to respect our privacy in this most difficult time. Right now, we are hurting and struggling to understand. Today, we are embracing each other; we know this pain and heartache will be with us forever.”

In an obituary for his daughter, Loncar wrote that she had struggled with deep depression since she was 11 years old.

"She would tell her family that she could never feel anything," the obituary reads. "She couldn't feel all the love from everyone around her. Most tragically, she couldn't even feel the love for herself."

In his Facebook post, Brian Loncar wrote, "I wish you could have seen both the pain and love that the suicide of a 16-year-old girl causes."

John Creuzot, a former judge and current attorney, was close with Loncar.

He says they talked just last week about the loss of his daughter.

"We told each other we loved each other, and anything I could do. But I didn't expect this. It's kind of hard," said Creuzot.

He says contrary to the public persona seen in a series of popular television commercials, Loncar was actually an introvert. He cared deeply about his clients and work.

"People don't realize Brian was a very giving person," he said. "He did a social security business for people that were denied benefits. And I don't think it made any money."

Loncar specialized as the lead attorney in a civil litigation law firm. He was billed as “The Strong Arm” in a series of well-known TV commercials that have aired in North Texas for years. Loncar & Associates was founded in 1988, and now has several offices across Texas and serves 7,000 clients per year, according to the firm’s website.

Attorney Pete Schulte said he expects Loncar's legacy to live on through the work of his associates and colleagues.

"Everyone knew Brian," said Schulte. "I think it's the biggest shock in the legalcommunity. It's Brian. We don't expect that."

The personal injury attorney made local news in 2008, when he totaled a Bentley in a crash with a fire engine. A lawsuit he filed against the City of Dallas was later thrown out.

This story will be updated as we learn more.