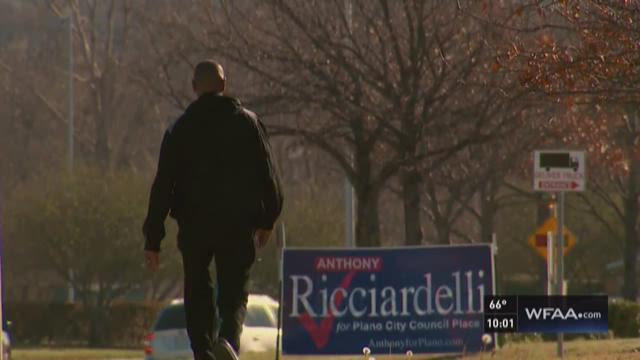 Patrick Edmond of Plano is not the type of person to ask for help. He prefers to do things on his own and in his own way.

Edmond's morning commute starts at 8 o clock. It starts on Legacy Drive in Plano and ends in McKinney at Highway 380 where he works at Braum's.

"Some people drive, some people ride bicycles, and I happen to walk," he told News 8.

The story about his 12 mile walk each day was first noticed by a McKinney Police officer. That officer felt inspired by Patrick's determination and snapped a picture with him and posted it on Facebook. The response from the community was tremendous.

Edmond tells News 8 that he once did have a car and has now just gotten accustomed to not having one. He says as he's walking he's thinking about people, about life moments, etc..

"The man upstairs, He walks with me everyday," Edmond said.

LoEster Posey of Mansfield is Patrick's aunt. She hasn't seen Edmond in several years since his father's death.
"He took nobody's phone calls," she said.

She says he closed himself off. On Tuesday she was committed to finding him on his walk to work.
"He has had a lot of hard blows in his life," she said.

Patrick was raised in Plano. His parents died years apart, his best friend had overdosed and he also fought through drug addiction.

"Life knocks you down sometimes. You gotta get up and keep going...keep walking," said Patrick.

He says he thinks about all of that as he walks. The walk is comfort for him but he doesn't want you to feel sorry.
"I would love to have a car but a car don't make the person," he said.

After many missed Thanksgivings and Christmases. LoEster had found Patrick walking on the Highway 75 North service road. He does not take many rides from people but this one was needed.

Patrick is reminded he has family just around the corner. This story is not just about a man walking to work. It's about a man knowing he'll never walk alone.