"It makes me feel good. Feels like I'm worth something." -Jon'Tay Wise. 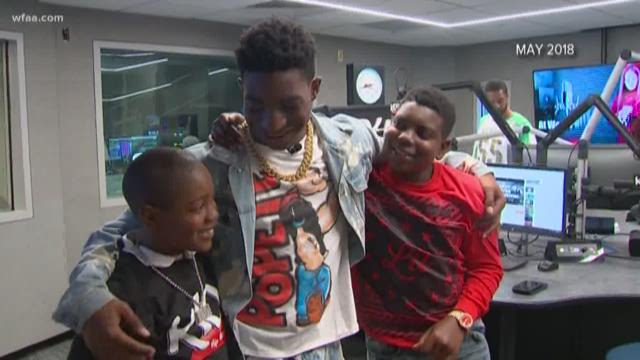 We have some great news. It's an update about three foster brothers we featured last May.

They were in the middle of great hardship until a loving couple saw their story. This Wednesday's Child is a success story. What a difference a year makes.

In May of last year, WFAA and K-104 teamed up to try to find three foster brothers a home.

Jon'Tay, Ja'Marcus and Jeremy came back to to the K-104 studios in Arlington to share the good news over the airwaves. They have been adopted.

Just hours earlier, the brothers stood in a crowded Dallas courtroom surrounded by love on their "gotcha" day.

"Just being adopted. It feels like forever. When the day finally comes it's just relieving," 16-year-old Jon'Tay said.

"We saw the boys on Wednesday's Child. I sent Michael the link and I said, 'Buckle up, butter cup,' because these are our boys and they have to be together," said their adoptive mother Stephanie Wise.

She was heartbroken when she saw our story and heard that the brothers were separated in foster care. Stephanie and husband Michael knew they could help.

"It makes me feel good. Feels like I'm worth something," Jon'Tay said.

The brothers wanted to personally thank K-104's Bay Bay, and the entire team for treating them like family when they didn't have one.

"We met them in December, and I'm so grateful that y'all do these things because I would have missed out on three of the greatest blessings of my life," Stephanie said.

The statistics were stacked up against the brothers. They were older and there were three of them. And if you're a foster child, 13-year-old Jeremy wants you to draw strength from them.

"Don't ever give up because your day will come. Just believe me," he said.

Last year, Jeremy told us he cried often about their situation. His older brother is happy that's not the case anymore. "There's really nothing to cry about anymore. The only thing to cry about are tears of joy. We came a long way," he said with a smile.