Carry the Load: Retired Marine to begin journey across Israel 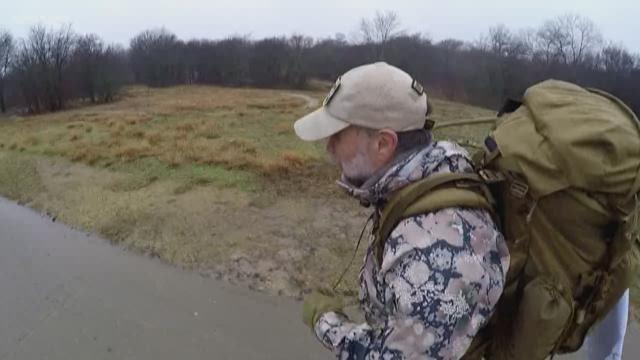 Wednesday morning Gene Blanton, 60, will begin the journey of his life. But as the retired Marine begins a 620-mile walkabout across the state of Israel, he is quick to point out that this journey is not about himself.

"Because Gene may very well fall on Gene's face," he laughed. "The tribute and what's important are what these folks have done for us. And that's going to be eternal regardless how my own trek turns out."

The North Dallas businessman and leadership coach is walking the entire Israel National Trail, from Eliat in the south, all the way north to the Lebanon and Syria borders.

"There's always the challenge that this old body will fall apart during the middle of it," he joked during an interview last week in Plano the day before he left on his journey. "It's a little bit different than walking the Appalachian Trail."

And he's taking the trip, and the potential dangers that come with it, for a specific purpose. Ever since a good friend lost a nephew in battle in Fallujah in 2004, the death of Marine Sgt. Byron Norwood stuck with him. A poem entitled "Your Son", now published in the Congressional Record, was his first tribute to the fallen Marine.

"To the mothers and the fathers of United States Marines," the poem begins, "who have fought and bled and died, so that freedom's bell still rings."

But this Marine who never saw combat of his own, wanted to do something more.

"It's ultimately about bringing honor to those that have given all for us," he said.

So, he's walking for Carry the Load, the Dallas non-profit dedicated to helping veterans recover and thrive. The group gathers each Memorial Day in Dallas' Reverchon Park hoping to change Memorial Day from what it's become: a day of barbecues and furniture sales. They'd prefer the honor and reverence its counterpart is given in the state of Israel, where everyone stops, even if driving on a highway, to stand in reverence and remember.

"That would be awesome," Blanton said. "That would mean a lot in this country."

So for the next two months, Gene Blanton walks, honoring a different fallen soldier each day, blogging and sharing his journey online, and raising awareness and money for the veterans who need and deserve our help.

"And if we can truly make that awareness and if this does that in some small way, it'll be worth it," he said.

Worth it too for the hero he said he left here at home. His wife.

"And I told her, you know, you married a crazy man. And she said I just didn't know how crazy," he laughed.

But the good kind of crazy: crazy enough to walk a distant path alone hoping his steps bring us closer to remembering the fallen and every veteran in need.

To the Mothers and the Fathers

Who have fought and bled and died

So that freedom's bell still rings

From the Halls of Montezuma

To the shores of Tripoli

From the alleys of Fallujah

From the sands of Iwo Jima

To the hills around Khe Sanh

From the smoky hell of Belleau Woods

Your Son fought and won

There is a debt we owe Your Son

That we can never repay

We owe Your Son more than platitudes

Heard on Veterans or Memorial Day

Your Son is a son of America

One of the Proud and the Few

Your Son volunteered to do the things

Other men would not or could not do

Your Son was Semper Fidelis

Always Faithful to the end was he

Your Son was a shining example

Of what a man is supposed to be

Now Your Son has been reassigned

To stand guard on Heaven's streets

And when my tour of duty is over

I know that we will meet

I'll thank Your Son for my freedom

For keeping terror on a distant shore

I'll thank Your Son for our way of life

And the sacrifice he bore

So tonight when you cry out to God

While praying on your knees

Know that He's a loving God

Who will listen to your pleas

To lose Your Son for freedom's cause

God sent His Son to die for us

So you can see Your Son again