A New York Times bestselling author is calling out the Highland Park High School students for mocking him during a speaking event at the high school. 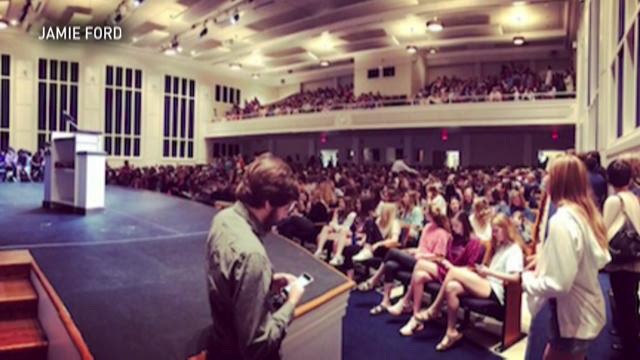 HIGHLAND PARK, Texas -- A New York Times bestselling author is calling out Highland Park High School students for mocking him during a speaking event at the high school.

Jamie Ford, author of Hotel on the Corner of Bitter and Sweet, posted his experience on his website. Ford spoke at the high school Thursday as part of its HP LitFest that invites writers and authors to speak to students. It seemed to be going well until the crowd began clapping while he was speaking.

Ford thought it was a "brief moment of impoliteness," but said the clapping continued when he talked about how 120,000 Japanese Americans were relocated and incarcerated during World War II.

Then you clapped and cheered the Japanese Internment.You couldn’t resist.

Ford called the students part of the educational system that gave Levi Pettit, a Highland Park graduate expelled from a University of Oklahoma for a racist fraternity chant.

"In coming to Highland Park High School, I thought that was an anomaly by an immature alum, a racially insensitive apple in a barrel of healthy fruit. But now I’m not so sure," Ford wrote.

Ford said there were other students who apologized on their peers' behalf. He applauded the staff and volunteer organizers.

"'This place is awesome, but half the kids are basically corrupt politicians in the making and future date rapists.” They even used an acronym, the FDRC, the Future Date Rape Club. (Please tell me that’s just a joke.)"

In response, the school sent the following statement:

HP LitFest is a wonderful and invaluable annual event that has brought Pulitzer Prize, Tony Award, and National Book Award winners to Highland Park High School. It is a hallmark partnership between our school and community, which allows our students and teachers to interact with dozens of writers and artists from around the world each year.

Unfortunately, the behavior of some of our students during this year's keynote presentation was not at the standard that we expect. We value the current and past authors who make this event possible, and we will work with our students to improve as a result of this experience.

"I think that what we need to do is take a situation like this, take a look at what happened, try to examine things that we did, try to examine how our students behave and learn from it and grow," Jon Dahlander, Highland Park ISD spokesperson said.

The high school held an assembly Monday for freshman and sophomore students. They talked about how to treat guests and outlined the school's expectations as they move forward.