"Anything that any of us can do to feel back to the way life was," said Rooftop Cinema Club manager Jeff Michnal. "It's great to see people happy for a change." 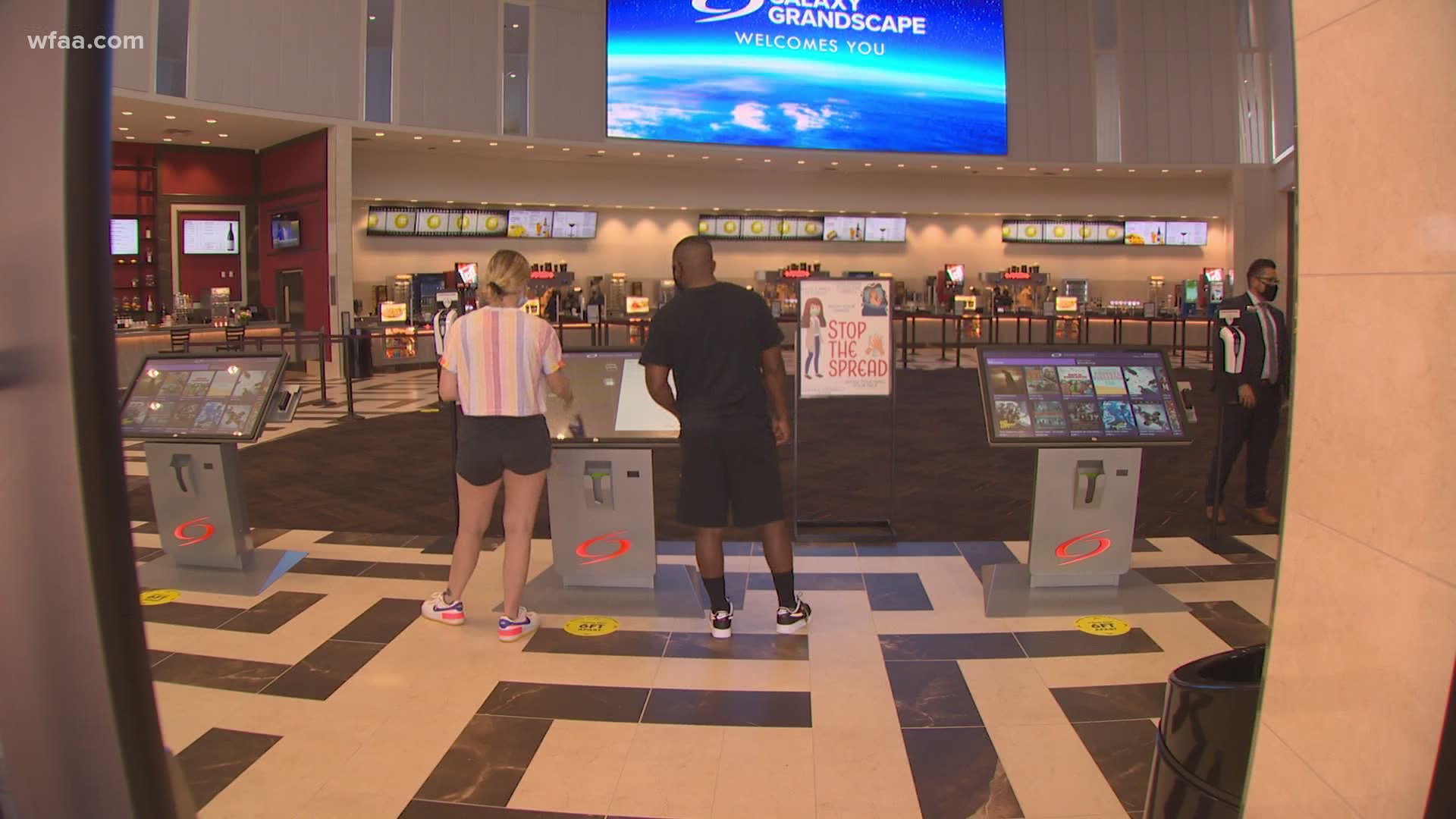 DALLAS — Theaters in North Texas, indoor and out, are using unique approaches to social distancing and other safety protocols to get themselves back into business, and get the rest of us back into a pre-COVID-19 "normal" routine.

The Rooftop Cinema Club opened its drive-in at the Central location this week on an empty lot along Interstate 75 in Dallas, right next to the former location of the, briefly, infamous leaning tower of Dallas.

Since Tuesday, mostly to sell-out crowds in a grass and gravel lot that holds approximately 200 vehicles, they have been showing movies on an inflatable outdoor movie screen, with mobile food trucks serving as concession stands and audio from the movie broadcast on a localized FM radio channel.

Friday night, WFAA found newlyweds Elizabeth and Clint McClain, the hatchback of their SUV open and pointed toward the movie screen in the front row, waiting for the showing of Dirty Dancing.

Elizabeth McClain admitted it wasn't really about the movie itself. It was about a chance to get out of their loft apartment, where both have been working remotely since mid-March.

"Anything that any of us can do to feel back to the way life was," Rooftop Cinema Club manager Jeff Michnal said. "And to do it safely and socially distanced, and be among people again. It's great to see people happy for a change."

Meanwhile, in The Colony at the new Grandscape complex, the Galaxy Theatre is opening, admittedly at a difficult time.

"Today is opening day so it's the first day we're back in business," said general manager Simpson Borens, who detailed how employees will be wearing protective masks, that seating capacity will be limited to 50%, and that all precautions are being taken to keep moviegoers safe in the facility's 15 state-of-the-art luxury theaters.

"This just really, opening our doors helping every come back and really be a part of the community again and get out and enjoy and feeling normal again," Borens said.

And across Dallas near Trinity Groves, performers offered a drive-in theater performance of a different kind. Called Twilight at the Tin Star, it included classical music and the Bruce Wood Dance company. Theater-goers, who responded with applause and honking horns, viewed the sold out performances entirely from the safety of their vehicles.

Theaters are opening all across North Texas now, hoping to offer some sense of normalcy for an entertainment-starved public. And, while offering a safe, socially-distanced night out on the town, a glimmer of hope that perhaps "normal" maybe isn't too far away.