For many schools in Texas, marching band is a competitive part to their extracurricular programs. In 2020, many are trying to figure out how to get their kids ready. 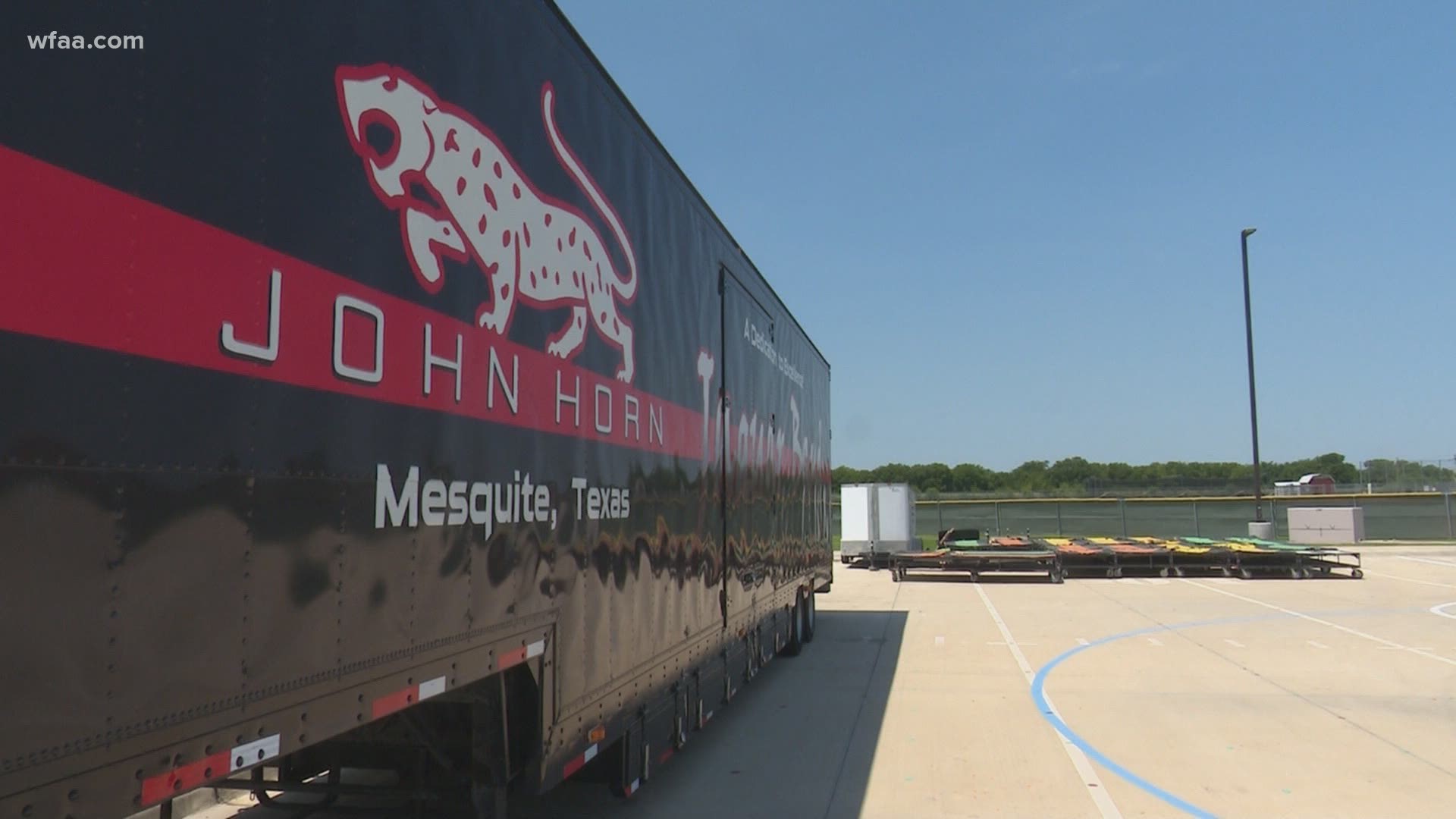 MESQUITE, Texas — The first full week in August is typically the first official week of band camp for many Texas high schools.

"You're talking about a curveball, this has been the nastiest curveball we've ever been thrown," John Horn Band Director Todd Burke said. "Everything's been turned upside down."

The John Horn Marching Band advanced to the UIL State Marching Contest in 2018.

While some marching contests have been canceled in 2020 due to the COVID-19 pandemic, the UIL is planning to hold its contest this year.

Since the state competition is every other year based on what conference you're in, John Horn is preparing to compete again this fall.

They'll just have to do it without weeks of training devoted to fundamentals and marching techniques.

"Hour-wise?" Burke said, when asked how much total marching time has been lost. "I'll have to add that up for you. I can't even think about it."

Credit: Mesquite ISD
In 2018, the John Horn marching band prepares for one of its fall competitions.

Burke said his band hasn't met in person since March.

He and his staff starting putting together this year's marching show in the spring but scrapped it because the students wouldn't have had enough time to learn everything they needed to perform well.

Instead, his band will put on a show John Horn performed in 2007.

"We were excited about it, too," Burke said. "It was a really great show. I'm frustrated for our seniors because I know they want to compete. We have a standard of what we want to get out on the field, and we're not going to see that standard this year."

John Horn Drum Major Jonah Hannett is one of the leaders in the band, saying what he and his peers have lost goes beyond just the skills on the field.

"The hardest part is just connecting with our members, especially the freshmen," Hannett said. "Marching band at its core is a way to build connections, and so we have to make sure we do that first when we get back."

Not only will the show be easier to grasp, Burke said their plans will create more space.

While a normal marching show has band members crossing paths and standing close together, John Horn will have a show that includes more distance between the students.

"My main priority is making sure the kids and staff are safe," Burke said. "Can we get into a routine where we know exactly how to enter the building or how to come to rehearsal? That's the goal."

Duncanville High School Band Director David Brandon is in a similar position as Burke, saying that preparing for a marching show is a "full-year process."

"We're probably on plan Z now," Brandon said, when discussing what this fall will look like.

Duncanville High School has gone to the UIL State Marching Contest 18 times, including every time the band has competed since 1988. Duncanville has won the competition three times.

Brandon said as long as it doesn't get canceled, his band will be competing again.

"We want to do well, and we want to measure ourselves against the very best," Brandon said.

"Once we know the number of students who will be here, we can start to better plan the show," Brandon said.

Like John Horn, Duncanville couldn't have summer band camp in person. This forced Brandon to move the show planned for this year to 2021 in exchange for a simpler show that can be learned quicker.

"We're going to be under the gun to get something in place if we start Sept. 8," Brandon said.

With a marching band that usually is about 325-425 in size, Brandon said figuring out how to get all the kids to the competition on buses is a challenge in and of itself.

"We haven't figured out that piece of the puzzle yet," Brandon said.

The band leaders from Central High School in Keller ISD are also trying to figure out how this fall is going to look.

Band Director Kevin McNulty said his team is sending the students physical training videos to help with the loss of summer workouts.

"If you're sitting down and playing video games and eating Cheetos all day, it's going to be really tough when we kick this thing back up," McNulty said.

Drum Major Kenya Meza said it's important to not just be physically ready, but mentally ready as well.

"It requires a lot of coordination and a lot of patience with yourself because learning a show and music, in general, is really never perfect," Meza said. "Going into a marching band is really difficult to pick up on. You have to be OK with the process and learn to love it."

Canton High School's marching band won UIL's state marching contest for 4A in 2018. Now looking to get back to this level of competition, Band Director Mike Bartley said his group will be performing the show his team put together in the spring.

Bartley said his band being only about 100 students in size has helped them start practicing in person and getting somewhat back to normal.

"For us, it's a little bit easier because we can space out since we're not as large," Bartley said.

All of these band programs have also utilized virtual methods of teaching and learning, to try and keep the kids musically active even if they are not together in person.