Amid racial tension, new decorum rules were adopted last month that prevent signs, apparel used as signage, and verbal attacks against board members. 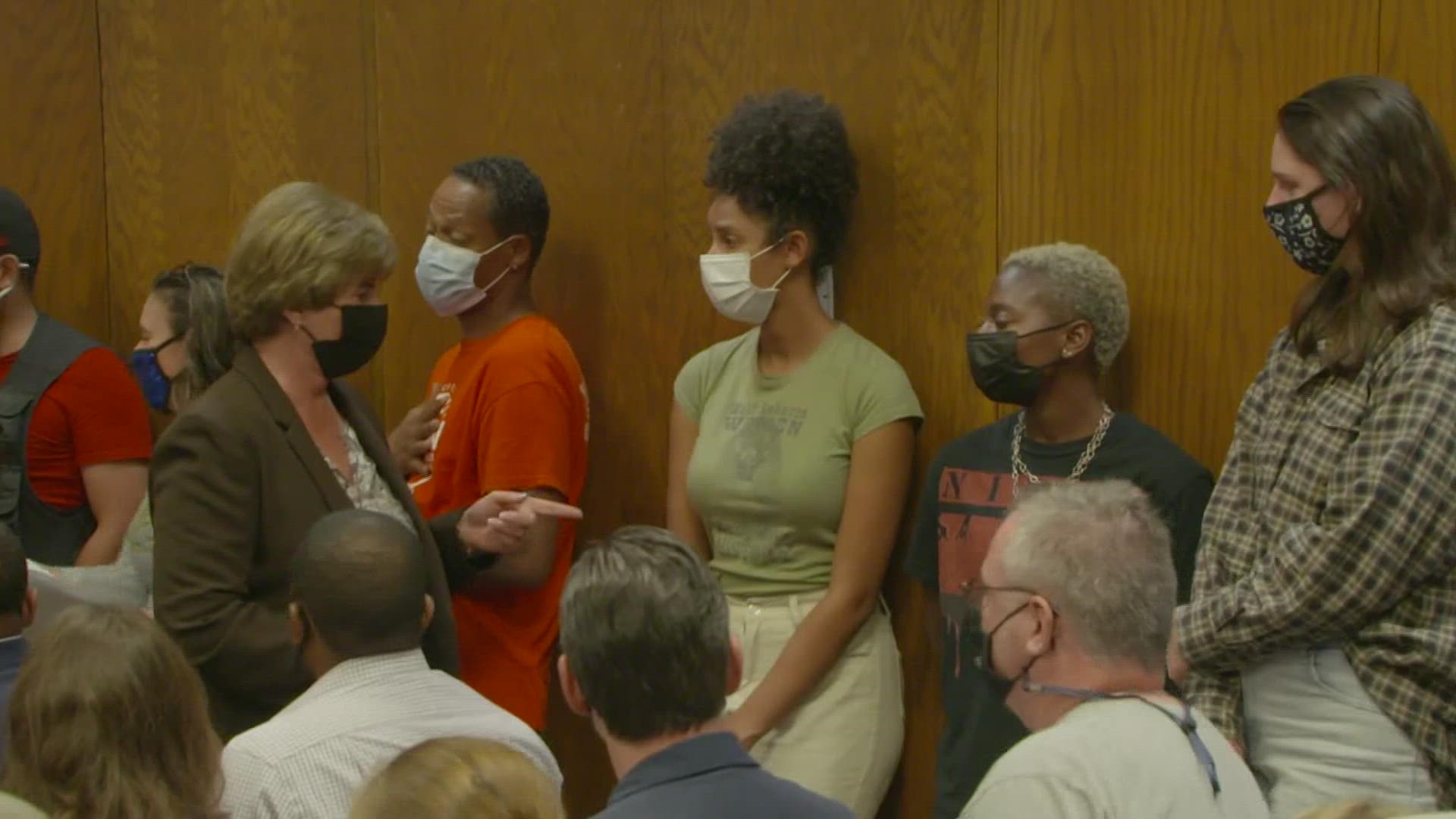 GRAPEVINE, Texas — Parents and students bizarrely found themselves changing, covering up, or turning their T-shirts inside out Monday night at a Grapevine-Colleyville ISD board meeting to stand up for a beloved high school principal.

The chaos is attributed to new school board decorum rules adopted in August after meetings started getting out of hand when the community rushed to defend Dr. James Whitfield.

On Aug. 30, Whitfield, the principal of Colleyville Heritage High School, was placed on administrative leave by the district.

Whitfield has told WFAA he has not explicitly been informed why the district put him on the chopping block.

But on Monday night, during the contentious board meeting filled with Whitfield's supporters, a district official revealed for the first time why Whitfield was up for non-renewal of his contract.

The official gave a laundry list of reasons that included performance issues, insubordination with superiors, and Whitfield failing to establish and implement high expectations for all staff and students.

In addition, the official also said Whitfield was deficient in observation reports, evaluations and lacked communication skills and situational awareness.

The official also listed an instance where Whitfield failed to report misconduct among staff.

The board voted to move ahead with Whitfield's termination. He now has a chance to appeal that decision and have a hearing.

After that hearing, the board then has to do a re-vote on Whitfield's termination.

Despite the reasons given Monday night, an overwhelming amount of parents and students have expressed that the district is moving to ax Whitfield because a losing board candidate accused him of supporting critical race theory.

The district staunchly denies that belief.

"Because of his extreme views, I ask that a full review of Mr. Whitfield's tenure in our district be examined and that his contract be terminated effective immediately," said Stetson Clark, who lost a recent election.

Since Clark's remarks, parents and students have spoken in support of Whitfield at board meetings. Tensions have grown, so board members adopted new decorum rules for meetings.

Signs, apparel used as signs, and verbal attacks against board members during public comment will now not be tolerated in the board's chambers.

Those rules were front and center Monday night when Next Generation Action Network members, a Dallas-based activist group, showed up to support Whitfield.

Members of the group wore their shirts, which included no profanity or obscenities, and weren't allowed into the chambers because of their threads.

This is wild. I’ve never seen this.

Some not let in because of the ‘logos’ on their shirts.

A meeting rule says ‘apparel used as signage is not allowed in meeting.’ Their shirts just have the NGAN logo and a quote. pic.twitter.com/AXQkfTIekW

Nichole Mansfield is one of those members. She was instructed by security that the group's logo couldn't be shown.

"I felt like we were being targeted," Mansfield said. "If we wanted to go in, we had to either turn our shirts inside out or change our shirts."

Mansfield and others strongly questioned security officers and pointed out that other audience members with logos on their shirts were allowed in without getting any grief.

In fact, WFAA didn't see any enforcement of the new rule until NGAN showed up.

After that conversation, the district's chief operations officer went around the meeting and made anyone with writing on their shirt either cover it up or turn it inside out.

Not to mention, a day after the district released the new rules on Aug. 22, a member of 'Moms For Liberty,' a right-leaning activist group, can be seen online addressing board members wearing her shirt, which isn't covered.

"It was racist. Let's call it what it is," Mansfield said. "If one thing applies to one group, it should apply to everyone."

GCISD sent WFAA the following statement in regards to this story:

"On August 22, 2021, GCISD published its Board Decorum rules in response to audience disruptions and a general lack of decorum at recent GCISD Board meetings that impeded the orderly conduct of the meeting. One of those protocols reads as follows: “Apparel used as signage is also not allowed in the board meeting. Individuals will be asked to remove, cover or turn inside out the apparel or they will not be allowed to enter the meeting; however, said apparel may be worn in the parking lot or in the foyer area of the administration building.” This is in addition to signs not being allowed into the board meeting.

During the August regular board meeting, and the September special board meeting, there were attendees that were informed of the board decorum protocols related to apparel as signage and asked to remove, cover, or turn their shirt inside out. In response to the frustrations vocalized by several attendees at the September 20 meeting, anyone in attendance that was wearing a shirt with writing was asked to remove, cover or turn inside out their apparel, including individuals wearing shirts with the District logo and value statement.

The District continuously reviews and strives to improve its protocols. Any changes or modifications to the board decorum rules will be communicated prior to the September 27 regular board meeting."