The wall once protected many houses from tollway crashes or out of control cars along the Dallas North Tollway near Royal. 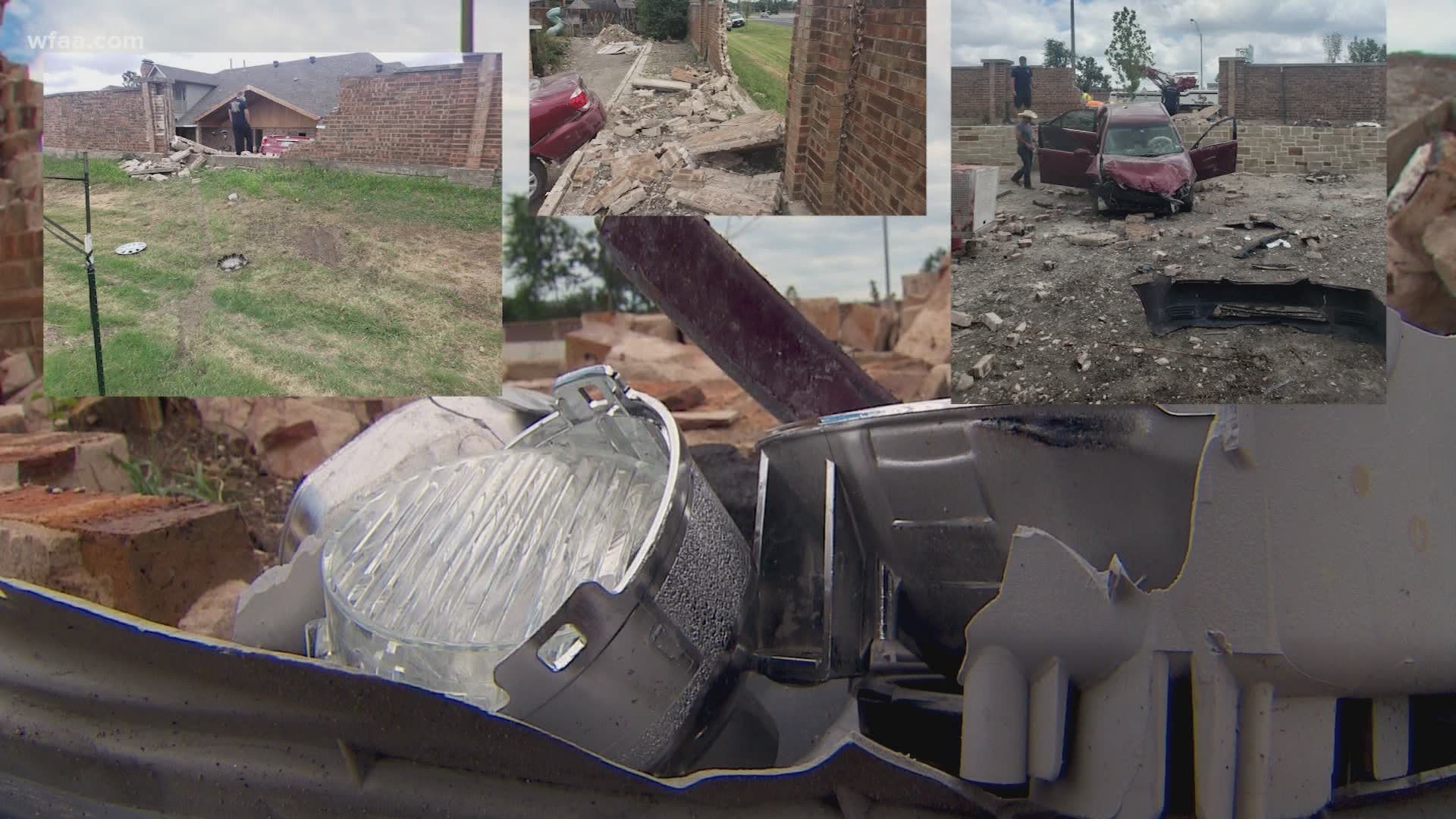 DALLAS, Texas — A group of neighbors is pushing the City of Dallas to help them rebuild a near ten-foot barrier wall along the Dallas North Tollway that once protected their homes from tollway crashes and out of control cars.

The wall was unfortunately knocked down by that infamous EF-3 tornado that ripped through North Dallas last October causing an estimated $2 billion in damage.

If you drive around impacted areas, it's common to still see homeowners cleaning up, or homes boarded up, for that matter.

For Tony Scalise, COVID-19 hasn't been his only opponent over the last year.

That barrier wall once stood behind his house, which suffered incredible damage when the tornado blew through.

He hasn't just been rebuilding his home near Royal Lane, but trying to get that barrier wall rebuilt too--which has proved difficult thus far.

"This is the one thing that we just can't rebuild to protect ourselves and our homes from this gigantic safety hazard that is the tollway," Scalise said.

The wall protected a number of homes, backing up to them along Scalise's alley.

Credit: WFAA
Tony Scalise stands in front of his alley where the barrier wall once was.

While effective, there's just one problem: it was built illegally when the subdivision was erected years ago. As early as 2006.

That issue makes it difficult to lay responsibility at anyone's feet.

An HOA used to exist in the neighborhood, but doesn't anymore

Unfortunately, Scalise and his neighbor Clay McMahan had no idea they would be dealing with someone else's incompetence from over a decade ago.

"It provided safety for us, because if a car comes off that tollway--it provides as a launching pad for the cars to land on top of our houses," McMahan said.

"Without the wall there, our property values are going to be greatly reduced."

While lobbying the city and the NTTA to rebuild the wall, Scalise said he was informed that the wall was built along a city easement.

Credit: WFAA
A portion of the barrier wall is still standing at the end of Scalise's alleyway.

No permission was granted from the city to erect it, and when the NTTA was building its barrier walls along the tollway, it appears to have skipped the section where the wall once stood because it would be redundant to have two of them back-to-back.

In a nutshell, Scalise was told that if he and his neighbors wanted the wall rebuilt, permits would have to be filed, and he, along with others, would have to pay for it.

"We can't do anything to protect ourselves and that's ridiculous," Scalise said.

An accident waiting to happen

The push to rebuild the wall grew stronger after a car plowed through a barrier wall across from Scalise's home on the west side of the tollway in late July.

Credit: WFAA
Photo of the accident.

No one was injured, but it was a spectacular wreck that ended up in someone's backyard.

Attorney Lynn Fielder lives next to the home where it happened.

He told WFAA that it's the third time a car has crashed into a barrier wall on his side of the tollway since 2013.

Credit: WFAA
A car that lost control along the DNT at the end of July and ended up crashing into a barrier wall on the west side of the tollway near Royal.

One of those times, a car landed in Fielder's backyard.

"You don't expect to find a car in your backyard," Fielder said. "I'm not excited about it. and, yeah, it's a problem."

"We really want to get something done about it."

Council Member Jennifer Gates is trying to work on a solution with Scalise, one that may even end with the city helping out with construction or payment.

"That's nothing to them," McMahan said. "That's chump change. Help us out."

And for those calculating the need or the odds of a car flying through someone's home, Scalise has a simple answer.

"Well, no one expected this tornado to happen either," he said.