A friend of photographer Peggy Short-Nottage's family recently rediscovered the slides, and she is sharing them in advance of the 38th anniversary of the deadliest volcanic eruption in U.S. history.
Author: Capi Lynn (Statesman Journal)
Published: 11:53 AM CDT May 16, 2018
Updated: 11:57 AM CDT May 16, 2018

Peggy Short-Nottage and her husband joined sightseers rushing to Mount St. Helens when volcanic activity escalated in the spring of 1980.

Instead of hopping in a car and making the drive to Southwestern Washington, they hopped in a plane.

From the cockpit of their Cessna 150, some 10,000 feet in the air, Short-Nottage documented the mountain’s transformation before and after its catastrophic May 18 eruption with an Olympus OM-2 camera and a telephoto lens.

Images of a snow-covered conical peak, mushroom-shaped clouds of ash, and a flattened forest are among a collection of never-before-published aerial photographs. 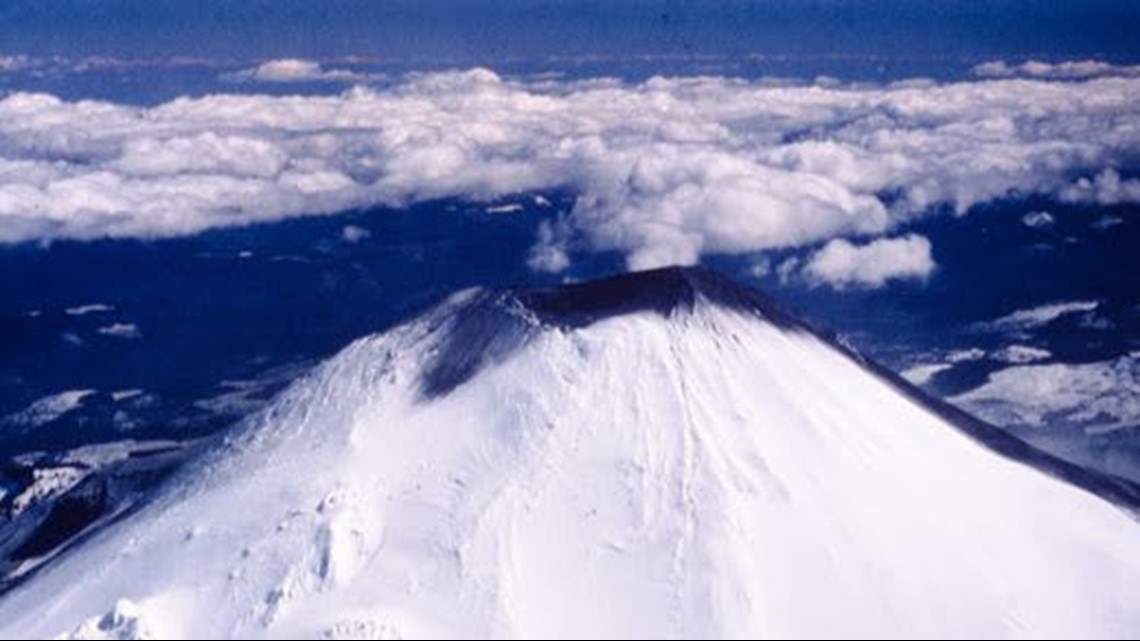 The rare images, shot in color slide film and preserved in 2-inch-square cardboard frames arranged in a carousel tray, were put away and forgotten, later presumed lost.

A friend of Short-Nottage's family recently rediscovered the slides, and she is graciously sharing them in advance of the 38th anniversary of the deadliest volcanic eruption in U.S. history.

The eruption scattered ash across a dozen states, and the lateral blast acted like a giant Etch A Sketch, wiping away the landscape within minutes. The debris avalanche, mudflows, and flooding caused destruction and damage in a 230-square-mile area.

In Short-Nottage's collection of 34 slides, the devastation is juxtaposed with breathtaking beauty.

The volcanic activity at Mount St. Helens, which picked up steam two months before the big blast, was alluring to Lyle Baker.

He studied geology in college and although he wound up taking a different professional path, he never lost interest in the natural processes that change Earth’s structure.

"The whole Mount St. Helens thing was like a dream come true, other than the 57 people who died," said Baker, who lives in West Salem with his wife Susan.

He was mesmerized when shown aerial images of the mountain all those years ago by Tom Bockelman, Short-Nottage's father who worked as a commercial and portrait photographer in Salem.

"It just happened that they caught the mountain during an eruption at sunset," Baker said. "You had all these colors of ash from the sun. A couple of pictures looked like they've been edited, almost like they're not real. It looked like Mars."

He asked for copies of the slides, and Bockelman obliged. Baker was blindsided a few years later when one of Bockelman's daughters contacted him and said their dad wanted the slides back. Bockelman may have mistakenly handed over the originals.

"I looked and looked and tore everything up and couldn't find them," Baker said.

As the years passed, he forgot about the slides, presuming they were lost forever.

During a recent move, though, his wife was going through boxes of family keepsakes when she came across a carousel tray of color slides.

No lightbox or loupe was needed because she knew right away what they were — the missing photographs of Mount St. Helens. Plus, the box was labeled.

To be honest, Short-Nottage assumed they were packed away with all the other slides and prints collected through the family business over five decades. She has stacks and stacks stored in every cabinet and closet in her Colton home.

Her father opened a portrait studio in Mount Angel in 1952, moving the business to Salem six years later. Mr. B Photography was located at the family's residence on Marion Street NE. The studio was in the living room, where Bockelman utilized natural daylight in his work.

Tom Bockelman's name, or that of the business, shows up hundreds of times in the Statesman Journal archives, often among the credits of wedding announcement portraits.

Two of his daughters, including Short-Nottage, helped grow the business through the 1980s and 1990s.

Bockelman went up in the plane at least once with his daughter and her husband, Allen Short, to get a bird's eye view of Mount St. Helens. Short-Nottage said it was snug in the two-seater, but there was room for a passenger behind the seats.

Her dad took his camera, too.

Short-Nottage believes these photographs are hers, though, because of the format used. 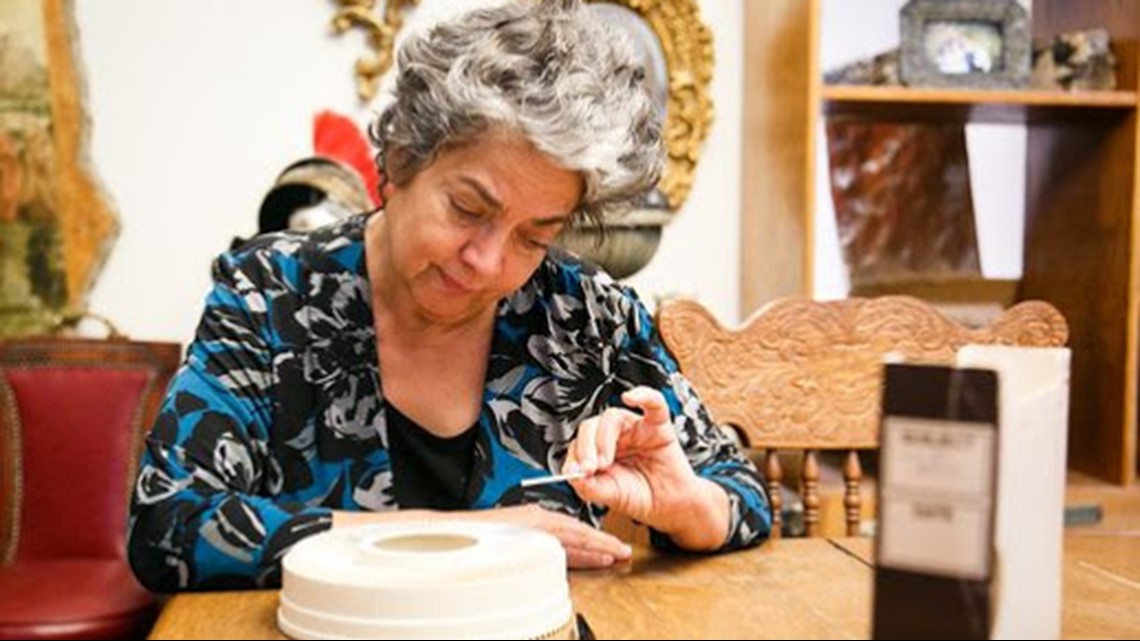 The popularity of Kodachrome slide film had faded by the 1980s, but it remained a film of choice for professional shooters and serious amateurs.

She doesn't remember her father ever using slide film. He preferred to use split 35mm in a half-frame camera, which split exposures in half and allowed users to take twice as many photos with one roll.

"I'd love to give my dad credit," Short-Nottage said. "The whole reason I got into photography was him."

He had her turning prints in the chemical bath in the darkroom by age 5 and gave her her first camera, a Kodak Brownie, in the first grade.

"He was amazing to teach me and my system when there were no women in photography," she said. "He didn't really see gender as a problem for learning anything."

Lure of the mountain

Short-Nottage and her husband lived in Gervais and kept their two-tone aqua-colored plane, tail number N554E, at a hangar at Whiskey Hill Aviation near Hubbard.

They flew out of Lenhardt Airpark, a privately owned, public-use airport with a grass strip. It was about a 45-minute flight to the mountain.

"Just about every time it blew, we went up," Short-Nottage said.

It wasn’t always easy to get away. The couple had four children at the time and both worked.

They were at home when they heard a loud boom and ran outside to see what was blowing up. A couple blocks away, standing on the railroad tracks in Gervais, they had a clear view of Mount St. Helens erupting in the distance.

Volcanic activity continued on the mountain for months, and subsequent eruptions were just as violent though not as deadly or destructive.

Allen Short died in a plane crash July 29, 1980, in British Columbia, narrowing the window of when these aerial photos were shot.

Most of the time they had the airspace to themselves, although one day there were a half-dozen other planes with the same idea. Two of the photographs in the collection show a single plane off in the distance.

"We were kind of surprised because we thought it would be kind of jammed," Short-Nottage said.

The Federal Aviation Administration established a 5-mile restricted zone around the mountain, although a spokesman for the Northwest Mountain Region was unable to provide any details as to when and how long it was enforced.

"I'm sorry to tell you that the FAA does not retain records that far back," spokesman Allen Kenitzer said in an email. "Further, anyone who might have been here at the time has long since retired."

The book "Mount St. Helens: The Eruption and Recovery of a Volcano" notes that 70 unauthorized planes violated airspace restrictions over the mountain on March 30 alone, citing the FAA as its source.

Short-Nottage can't imagine her husband not adhering to FAA regulations.

"Usually, Al followed the rules," she said. "You had to maintain a certain distance. You couldn't go where the ash was. You could only go on the clear side mountain.

"We were afraid of ash particles and what they might do to the engine."

If family or friends thought them crazy to stake out an active volcano, no one mentioned it. And she doesn't recall any white-knuckle moments.

"But I'm really comfortable flying," she said. "It was usually sunny when it blew, so the air was quite acceptable. It was occasionally turbulent, but I've been in more turbulence."

There was something profound about being at 10,000 feet in the air, above the clouds, alongside a mountain. The awesome view was worth every bit of turbulence.

"I don't think we hardly spoke because it was so amazing," Short-Nottage said.

"It was really amazing to see the transformation of the mountain and how far the ash went both in height and distance. It was unbelievable. It was so thick, at times it looked like it was standing still."

The trips ran together and didn't always lead to more photographs.

"Because it looked so much the same, we didn't always take a lot of pictures when we went," she said. "I wish I hadn't taken it for granted."

Recovery around the mountain continues, with visitors from around the world flocking to three learning centers and a variety of recreational opportunities in the 110,000-acre area now designated as a National Volcanic Monument.

Last summer, after another anniversary passed, the Bakers were in the middle of a move from their residence in West Salem to Salemtowne when Susan found the slides.

They were hidden and protected all this time through moves to two houses and a storage unit.

Lyle Baker arranged to return them to the Bockelman family, but first he called his son, Wes, who is a photographer on the side.

Wes Baker, who does landscape, portrait and wedding photography, was excited to see the images.

He was born more than a year after Mount St. Helens erupted but grew up understanding the lore and lure of the mountain.

"I hiked St. Helens the first time when I was 9 years old," he said. "It's a big part of my family. Dad always tells stories about how different it was before. I've been on the crater and hiking and backpacking around the mountain quite a few times."

Wes Baker shared digital images from the slides, with permission from the family. The slides are back in Short-Nottage's possession.

"I was thrilled to get them back when I realized I didn't have them," Short-Nottage said.

She examined her work, on 4x7 prints, during a recent visit to her home. Sometimes she needed a magnifying glass to make out details because her sight is failing.

Her favorite Mount St. Helens photo, to her disappointment, wasn't there. She remembers how the sky was so blue and the mountain and clouds of ash so orange, with a crescent moon above.

Which leads us to this kicker.

"I thought I had more than a single tray of mountain pictures," Short-Nottage said.

Stay tuned, until next anniversary.

“Forward This” appears Wednesdays and Sundays and highlights the people, places, and organizations of the Mid-Willamette Valley. Contact Capi Lynn at clynn@StatesmanJournal.com or 503-399-6710, or follow her the rest of the week on Twitter @CapiLynn and Facebook @CapiLynnSJ.