Dallas Mayor Mike Rawlings says he cannot support a bill intended to rescue the failing Dallas Police and Fire Pension Fund because in its current form it amounts to a massive taxpayer bailout.  He announced his opposition one day before the bill was slated to be considered in front of the committee headed by State Rep. Dan Flynn, the bill's author. The mayor is opposed to a "poison pill" clause in the bill that he says would drastically increase taxpayer contributions to unsustainable... 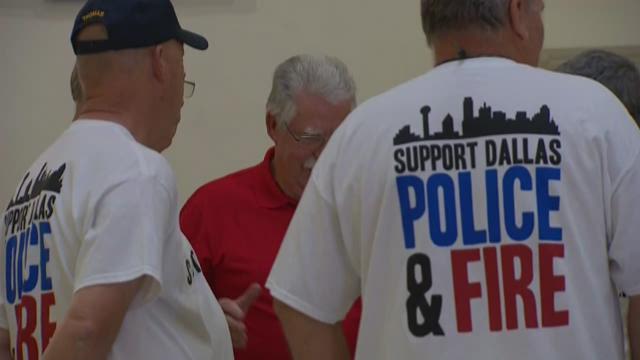 Dallas Mayor Mike Rawlings says he cannot support a bill intended to rescue the failing Dallas Police and Fire Pension Fund because in its current form it amounts to a massive taxpayer bailout.

He announced his opposition one day before the bill was slated to be considered in front of the committee headed by State Rep. Dan Flynn, the bill’s author.

The mayor is opposed to a “poison pill” clause in the bill that he says would drastically increase taxpayer contributions to unsustainable levels.

Rawlings spoke to WFAA after Flynn posted a tweet Sunday, saying Rawlings had “changed his mind” about supporting the bill.

“I finally had to tell him today that if this clause is left in, I’m sad, but I can’t support the bill as written,” the mayor told WFAA. “I’m hopeful that it will be taken out. It’s so financially punitive for the taxpayers that it’s just a nonstarter.”

In an interview Monday, Rep. Flynn said he was taken aback to receive the mayor’s text on Sunday informing him that he was withdrawing support for the bill.

“It is a big surprise to us and we believed we were dealing in good faith and for all the sudden on the eve of the committee hearing for him to decide that he can’t support it, yeah that’s disappointing,” he said.

Rep. Jason Villalba, R-Dallas, also accused the mayor of engaging in gamesmanship throughout the entire process.

“I believe that the mayor has been counterproductive in the entire process by not collaborating with the necessary parties to find a solution that works,” Villalba said.

The pension fund has unfunded liabilities of $3.7 billion. If no charges are made, the fund is projected to run out of money in about 10 years.

The fund is governed by state law, not by city ordinance, which is why a legislative fix is necessary.

What he’s adamantly against is a clause that he says would result in the city putting in another billion plus dollars to the failing fund over 30 years.

He says the clause would require the city to pay the 34.5 percent contribution rate even on officers and firefighters that it does not hire and even on raises that it may or may not give.

The clause sets a baseline number of officers and firefighters. In the case of police, that’s three officers per thousand. The clause would also automatically assume that a certain level of raises given.

“Basically you’re paying on phantom employees, not real employees,” Rawlings said. “We just can’t enter into an agreement with that degree of commitment for the city. No business would do it this way. We cannot find another pension fund in American where someone pays into a fund based on future employees. It’s just not done and it should not start here in the State of Texas.”

Flynn says the mayor is misinterpreting the meaning of the clause.

“We have a disagreement on what the clause means,” he said. “We don’t interpret it that way.”

He says the mayor’s text is the first he’s heard of an issue with that particular provision.

The mayor says he had been working behind the scenes for weeks seeking to have the clause stripped out. When that didn’t happen, he said he decided it was time to notify Flynn that he would be testifying against the bill Monday.

“This is the most taxpayer unfriendly poison pill that I’ve seen in this bill,” he said. “I’m not going to swallow this pill.”

Kelly Gottschalk, the fund’s executive director, said she plans to testify in favor of the “committee substitute bill as amended” but says her support is contingent on certain amendments getting incorporated in the bill.

“We will know tomorrow what will and won’t be incorporated,” she said. “The board did not have an opportunity to take an official position but it is generally in alignment with the bill as discussed at the last board meeting.”

Rawlings also expressed opposition to the current governance set out in the bill. It gives 50 percent control to the city and 50 percent to public safety workers.

The mayor currently appoints one-third of the board.

“The thing that’s really concerning to me is that retirees say Dallas promised us this money, ‘give it to us,’” he said. “Dallas didn’t promise the money and if you want us to own the problem,… Dallas needs to have the right governance to do that.”

He noted that when he first became mayor in 2011, he sought to have the pension fund audited in the face of questions about the financial stability of the fund.

“They said you have no legal authority to do that,” he said.

The mayor and the city’s position is that police and firefighters voted themselves excessively generous benefits, and that the fund’s leadership hid the extent of the fund’s troubles from the membership for years.

The excessive interest paid on special accounts known as DROP, along with years of bad real investments made by past fund leaders, are a major reason for the fund's looming insolvency.

The Deferred Option Retired Program, or DROP, was a program created in the early 1990s to help retain veteran public safety workers. It allowed officers and firefighters to retire from the pension fund but continue working.  The checks they would have received were then deposited in high-interest earning savings accounts.

Many retirees have also expressed their opposition, feeling that it asks too much of them. They are particularly opposed to a provision in the bill that would ask a newly restricted board to consider clawing back some of the excessive interest paid on DROP.

They also are opposed to a provision that would pay out the money remaining in DROP accounts over their projected life spans.

Legal challenges on those provisions are a virtual certainty.

Flynn says he recognizes that retirees are not happy with the some of the provisions in the bill either.

“They are insistent that there is a plan they were promised and they want it, but the world changed,” he said. “It’s not going to be what it once was because it was no sustainable.”

Flynn says he does not expect to make major changes to the bill. He also expect that he has the support to get the bill passed.

“I think it is what is necessary for us to achieve actuarial soundness, to have an ongoing plan and to be sure that we take care of the retirees,” he said.