David W. Nagy, 79, of Jefferson, passed away on July 22, after being hospitalized with COVID-19. 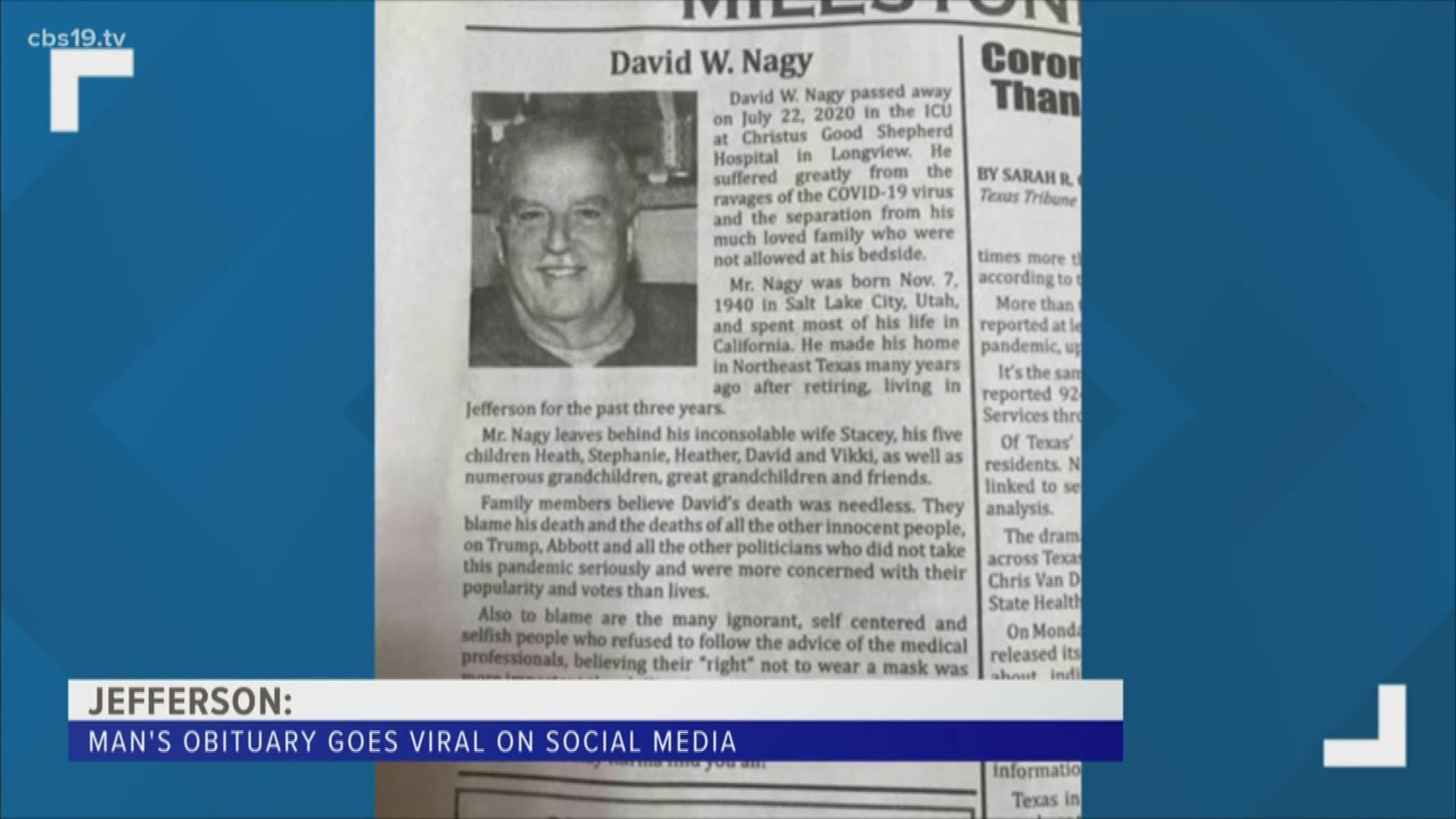 JEFFERSON, Texas — The obituary of an East Texas man, who died after contracting COVID-19, has gone viral on social media.

David W. Nagy, 79, of Jefferson, passed away on July 22, after being hospitalized with COVID-19.

David's obituary has been making the rounds on the internet and many were questioning its validity. Stacey Nagy, David's wife, confirmed via Facebook she wrote the obituary and submitted it to the Jefferson Jimplecute.

In the obituary, Stacey says her husband, who had underlying health issues, suffered greatly "from the ravages of COVID-19 virus and the separation from his much loved family who were not allowed at his bedside."

Stacey said David was in the Magnolia Place Skilled Nursing & Rehab Center for what was supposed to be a temporary recuperation period. In an interview with BuzzFeed, Stacey said David suffered a fall in late March that forced him to be hospitalized and then to the rehab center to recover. However, there was an outbreak of COVID-19 at the facility and her husband was one of the victims.

David's family says they blame politicians who "did not take the pandemic seriously" and were "more concerned with their popularity and votes than lives."

In an interview with Snopes, Stacey said she has seen a lot people around Jefferson and Marion County refusing to wear masks.

"Also to blame are the many ignorant and self centered and selfish people who refused to follow the advice of the medical professionals, believing their 'right' not to wear a mask was more important than killing innocent people," the obituary stated.

“It gets me so angry that people are aren’t taking this seriously,” Stacey said in an interview with Snopes. “The people who are dying are the older people especially — a lot of younger people are dying too — but it’s almost like they’re saying, ‘Who cares about the older people?’ I’ve been with my husband for 20 years and all of a sudden he’s gone. People should know how this makes others feel.”

"...Dave did everything he was supposed to do, but you did not," the obituary read. "Shame on all of you and may karma find you all."