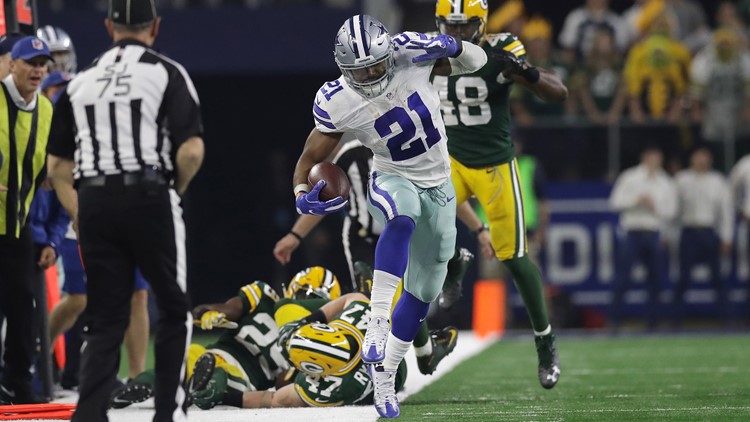 Photo by: Ronald Martinez
Ezekiel Elliott #21 of the Dallas Cowboys carries the ball during the fourth quarter against the Green Bay Packers in the NFC Divisional Playoff game on January 15, 2017 in Arlington, Texas.

Plaintiff Ronnie Hill is asking for more than $20 million in damages and claims the Cowboys conspired with Frisco police to cover up the severity of the crash.
Author: WFAA Staff
Published: 3:45 PM CDT July 30, 2019
Updated: 6:59 PM CDT July 30, 2019

This story has been updated with a statement from the City of Frisco.

The man involved in a 2017 car crash with Cowboys running back Ezekiel Elliott is suing the team and Elliott for more than $20 million.

"...the Dallas Cowboys conspired with the Frisco Police Department to cover up the severity of the accident to assure that Elliott’s health would not be placed in question before their playoff game."

The original suit was filed last August and only named Elliott and requested $1 million in damages.

The City of Frisco issued the following statement Tuesday night:

Both parties to the crash were offered medical attention and both refused. Emergency medical services were not requested by either party. Neither party was treated or transported.

The collision occurred on Jan. 11, 2017, at Dallas and Gaylord parkways when Elliott's Yukon ran a red light and struck and totaled Hill's BMW.

At the time, police said that Elliott had been involved in a minor car crash near the team's practice facility.

Cowboys personnel were at the scene of the incident and told Hill "we will take care of everything," the lawsuit says.

The suit also alleges that if Elliott had been examined following the collision, he likely would have been placed in concussion protocol, preventing him from playing in the Cowboys playoff game that January.

Hill suffered permanent personal injuries and damages, according to the suit, and is seeking damages for medical expenses, physical pain, mental anguish, loss of earning capacity and more.