The Confederate War Memorial is one of Dallas' oldest sculptures. It dates back to 1896 and sits right next to the Convention Center in downtown Dallas. 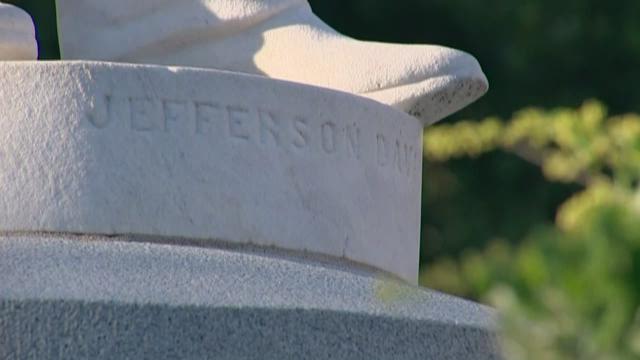 The Confederate War Memorial is one of Dallas' oldest sculptures. It dates back to 1896 and sits right next to the Convention Center in downtown Dallas.

"It's epic. It's the statue of an Olympic God or something," Michael Phillips, a historian, says sarcastically.

Phillips, who has been studying Dallas' history, is part of a group that hopes to bring down the city's Confederate monuments. In a letter and petition sent out Wednesday night, it urges action by ministers, scholars, and other educators.

"These are monuments that lie about history, and that's why I am interested in it," he said.

WFAA reached out to the Sons of Confederate Veterans. It just so happens its National Convention is this week and representatives could only be reached by phone.

Lieutenant Commander John McCammon says this is an "attack on American veterans." He also said. "History should not be erased, good or bad."

Phillips is asking for Robert E Lee Park to be renamed and also eight schools named after Confederate Generals.

McCammon of the Sons of Confederate Veterans says, "That is a false narrative. It is in no way celebrating slavery."

Phillips hope is that the petition ultimately sends a message to Dallas Mayor Mike Rawlings and the city council.

Phillips says he does not want the monuments destroyed. He says there is a place for them in museums, where it can be put in context.

WFAA also reached out the Dallas Chapter of the United Daughters of the Confederacy for comment, but the message was not returned.