WASHINGTON — Democratic lawmakers launched an extraordinary protest Wednesday, staging a sit-in on the House floor, bringing legislative business to a halt and triggering a chaotic, late-night showdown as they demanded a vote on gun control legislation. 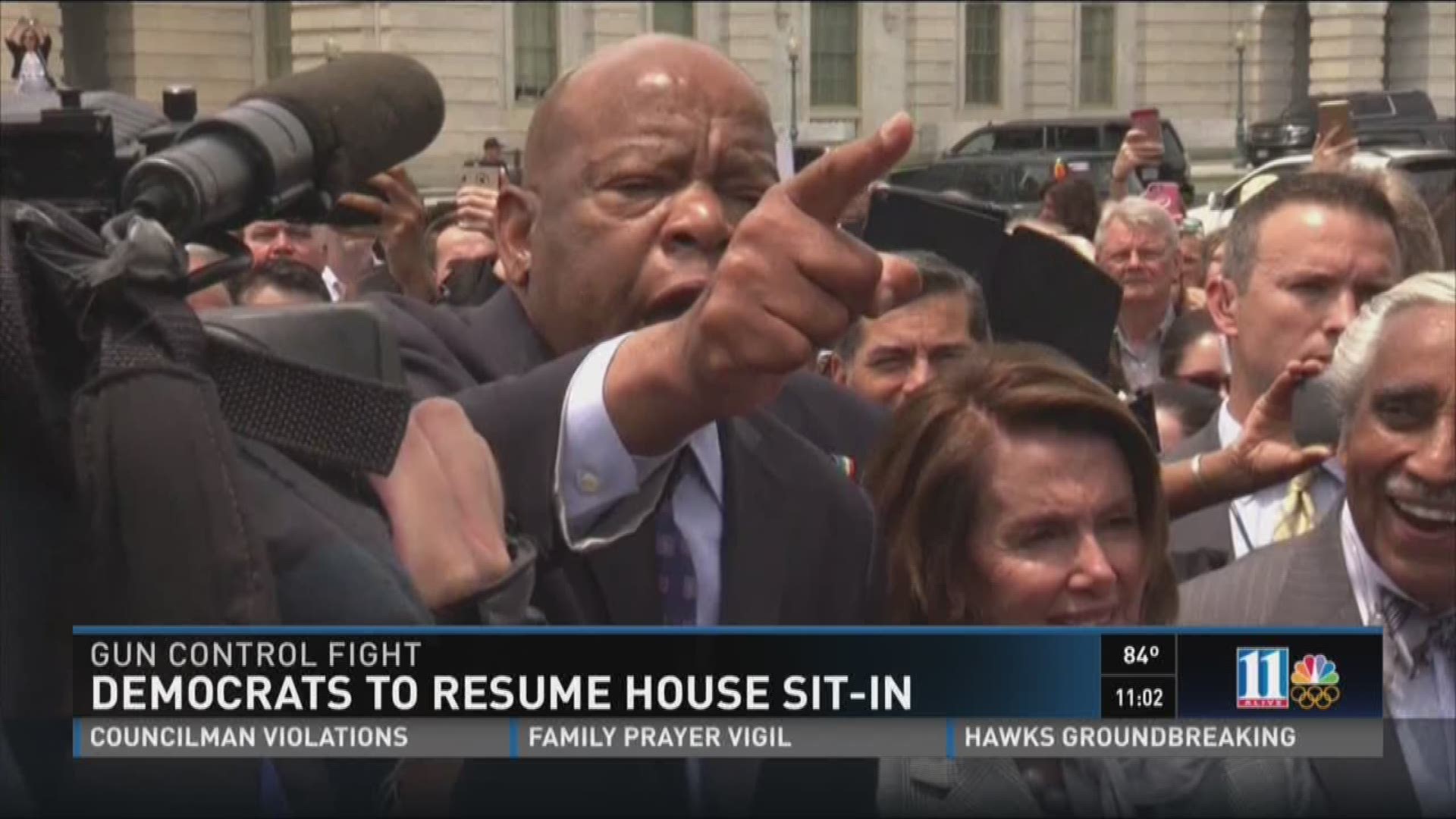 WASHINGTON — Democratic lawmakers launched an extraordinary protest Wednesday, staging a sit-in on the House floor, bringing legislative business to a halt and triggering a chaotic, late-night showdown as they demanded a vote on gun control legislation.

Led by Speaker Paul Ryan, R-Wis., who had called the dramatic protest simply a "publicity stunt," Republicans took back control of the floor at 10 p.m. amid Democrat chants, nearly 11 hours after the sit-in began. Democrats shouted "Shame! Shame!" as House business proceeded and members cast votes on measures unrelated to guns.

Scores of House lawmakers took to the House floor before noon and refused to let Republicans resume regular business until the House votes on gun control. They took turns for hours talking about gun violence, ticking off mass shootings in Newtown, Conn., Charleston, S.C., San Bernardino, Calif., and Orlando, Fla., where Omar Mateen slaughtered 49 people and injured 53 others June 12. 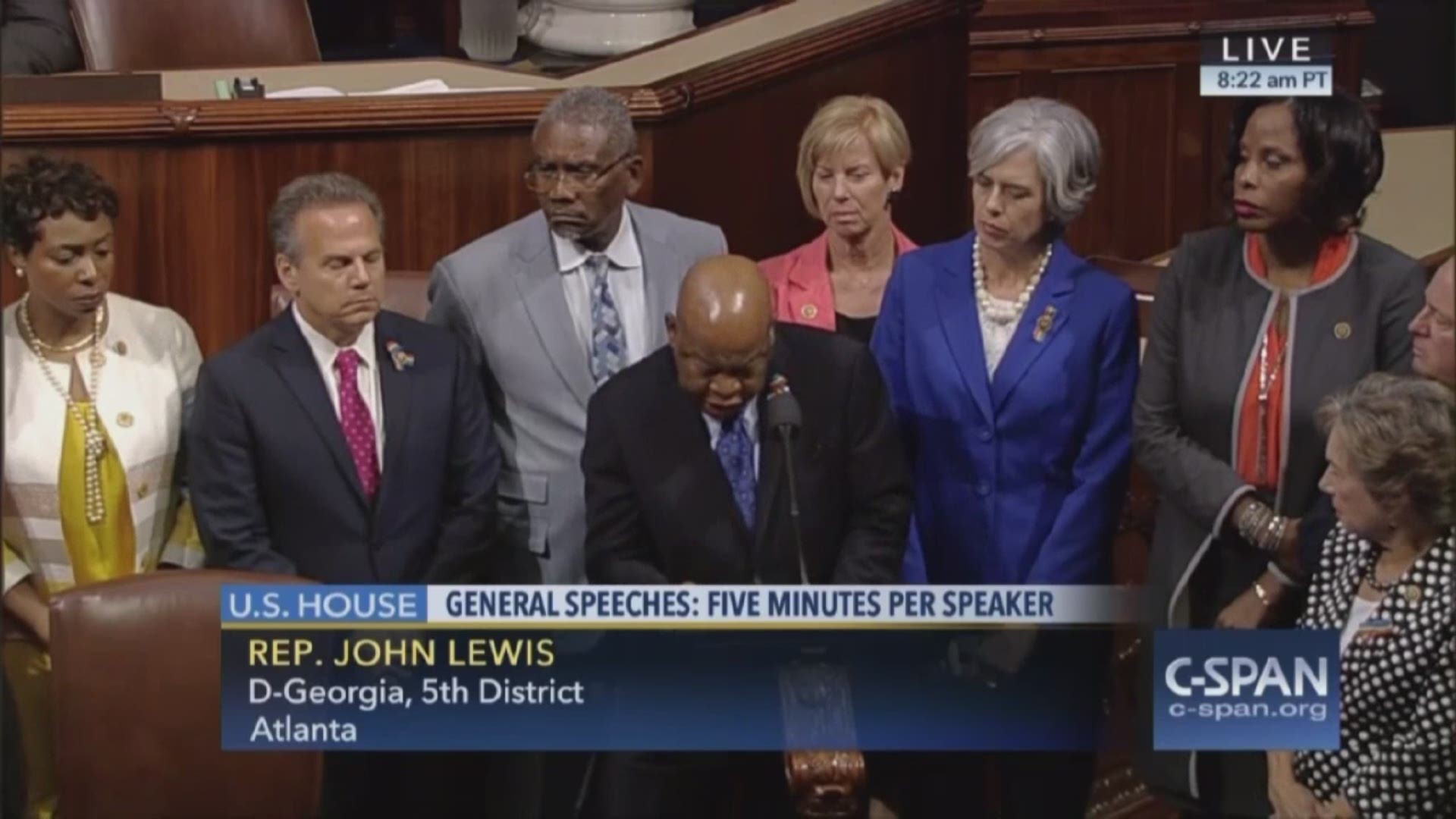 Rep. Ted Poe, R-Texas, attempted to gavel the House into order at noon, but when the Democrats refused to quiet, he gaveled the House into recess instead. When Ryan took to the podium later, he brought the House back into session and proceeded to votes. Republicans remained mostly stone-faced throughout the rowdy Democratic spectacle.

After the votes, the House recessed again, and Democrats returned to their protest speeches on the floor.

Ryan said earlier on CNN that he would not schedule a vote on gun bills that have already been defeated in the Senate. "This is a publicity stunt," Ryan said. "This isn't trying to come up with a solution to a problem. This is trying to get attention."

Senators on Monday voted down four partisan gun measures and were trying to craft a compromise Wednesday that would make it harder for people on terrorist watch lists to get guns.

Other House Republicans were less restrained in their response. They have opposed legislation toughening gun laws because they say the measures would infringe on Americans' rights to bear arms and to due process.

"Calling this a sit-in is a disgrace to Woolworth's. They sat-in for rights," Rep. Mark Walker, R-N.C., tweeted in a reference to black civil rights activists who refused to leave the store's lunch counter when they had been refused service in 1960. "Dems are 'sitting-in' to strip them away."

Most of the House demonstration, unlike last week's filibuster in the Senate that led to the votes Monday, was not broadcast on C-SPAN. The network carries feeds from cameras belonging to the House, which are controlled by the majority party and turned off when the House is not in session. Instead, C-SPAN aired video feeds being posted by Democrats from the floor via their social media accounts.

Rep. Jared Huffman, D-Calif., accused Republican leadership of not allowing the broadcast, although it is longstanding policy not to show the House floor when the chamber is in recess.

Democratic leader Nancy Pelosi of California went to the floor and called for a moment of silence. Rep. James Clyburn, D-S.C., led a prayer. No one appeared ready to give up anytime soon.

“I am prepared to stay here until hell freezes over,’’ Rep. Maxine Waters, D-Calif., said. “We’re here because we can’t take it anymore … We can’t take burying our young people."

Rep, G.K. Butterfield, D-N.C., who is chairman of the Congressional Black Caucus, said Republicans calling the demonstration a stunt, "is really an insult.’’

Sen. Chris Murphy, D-Conn, who led the nearly 15-hour filibuster in the Senate, went over to the House floor to show his support.

“This is an extraordinary tactic,” he said as he headed into the chamber shortly after noon. But, he added, “This is an exceptional time.”

The sit-in was extraordinary, but it was not the first time lawmakers had staged a protest after the cameras were turned off. In 2008, Republicans demanded a vote on oil drilling, but the Democratic majority under then-speaker Pelosi voted to adjourn and turned off the lights. Republicans came to the empty House chamber for days to make speeches about oil production and rail against what they said was unfair treatment by Democrats.

Over at the White House on Wednesday, press secretary Josh Earnest said House Democrats are “are showing the kind of frustration and even anger that people around the country have.”

“What Democrats are asking for is neither radical nor controversial,” he said, citing polls showing that expanded background checks are favored by large majorities of people, including gun owners.

President Obama tweeted thanks to Lewis for "leading on gun violence where we need it most."

"We need more than moments of silence. We need action. And that's what's going on in the House now," he added later, including a link to CSPAN. 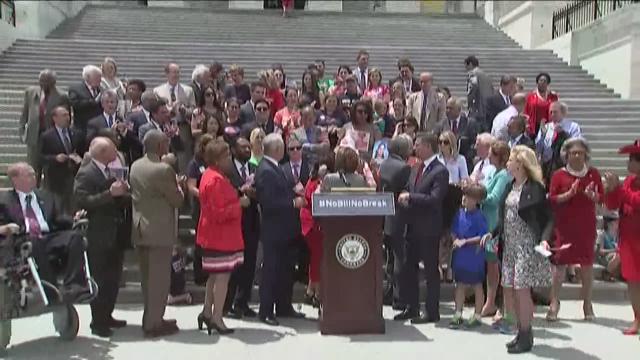