James White, founder of the Broken Spoke, dies at age 81

White had been suffering from congestive heart failure. 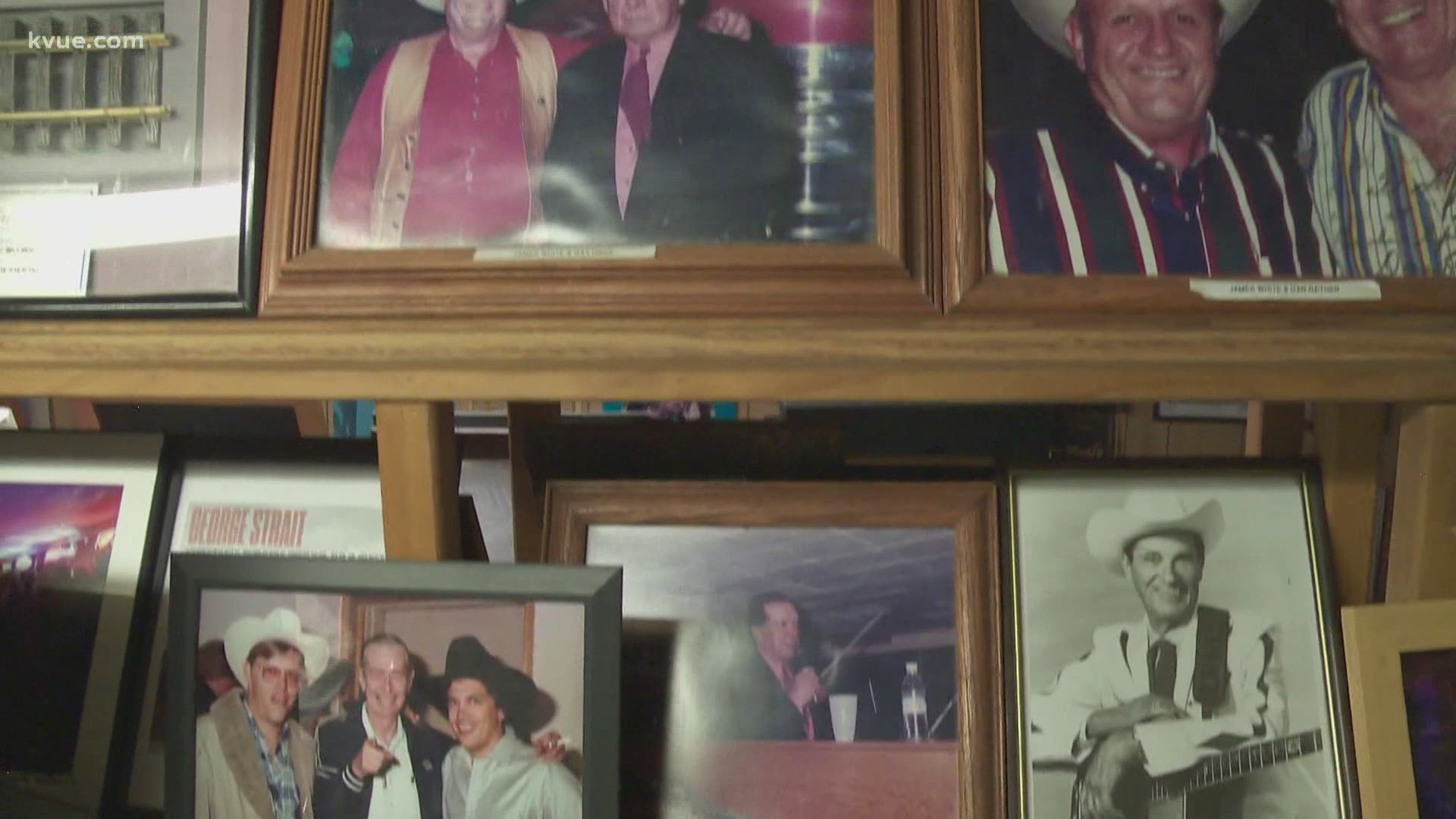 AUSTIN, Texas — James White, an Austin icon and the founder of the Broken Spoke dance hall, has died at age 81.

White's wife and daughter confirmed to KVUE Senior Reporter Tony Plohetski that he died at his South Austin home Sunday morning. He had been suffering from congestive heart failure.

White, known for his love of country music and rhinestone shirts, founded the Broken Spoke in 1964. The beloved dance hall has played host to country superstars since it opened.

"The Spoke to me is so much more than just a building and a place. It's a way of life for so many people," White told KVUE in October of 2020.

On Sunday, friends and family gathered outside the place White loved to much.

Some left flowers and others changed the sign in the front of the Broken Spoke to say, "God Bless You James M. White 1939-2021."

George Strait and his Ace In The Hole Band "cut their teeth in the music business" at the Broken Spoke, the bar's website states – and Strait paid tribute to the bar by featuring it on the cover of his album, "Honky Tonk Time Machine."

"Mr. James White’s passing leaves a deep hole in the Texas Honky Tonk world. He was a man dedicated to keeping that tradition from slipping away. Some of my greatest memories are of playing the Broken Spoke back in the late 70’s and early 80’s... (1/3) pic.twitter.com/u7EuBWbT7Z

Cousin and frequent Broken Spoke performer Monte Warden said everyone was White's friend, especially if they walked through the doors of Austin's legendary two-stepping dance hall.

The Broken Spoke was the subject of a 2016 documentary, "Honky Tonk Heaven: Legend of the Broken Spoke," and a 2017 book, "The Broken Spoke: Austin's Legendary Honk-Tonk." White himself was also featured in the documentary "Nothing Stays The Same: The Story of the Saxon Pub," which touched on the state of Austin's music venues.

BREAKING: James White, an Austin icon and the 81-year-old founder of the Broken Spoke Texas dance hall, died at his South Austin home this morning, his wife and daughter tell me. He had been suffering from congestive heart failure. White founded the hall in 1964. pic.twitter.com/A0UJd33ubk

"[White] looked real dapper in his scarf and his cowboy hat and his big belt buckle and his really cool shirt. He always had a cool Western shirt," said Evans.

White put hours into his business and hoped others would fall in love with it, too.

"I did it because of my love for country music and the people and the music. It really draws people in and that's a big part of the Broken Spoke and it's also a big part of Austin, Texas," said White in October of 2020.

On Sunday, Ray Benson of Asleep at the Wheel told Plohetski that he is heartbroken by White's death and said that he "was one of a kind." Benson credits White and the Broken Spoke for giving rise to the band's national fame.

White himself called the Broken Spoke the "last of the true Texas dancehalls and damn sure proud of it!"

In response to the news of White's death, former State Sen. Kirk Watson called him "a guy who always had a good story and always made me smile."

A sad loss of a guy who always had a good story and always made me smile. Great memories, and more than just a few, at this wonderful place. https://t.co/MCBmlu68dw

Austin Mayor Steve Adler called White a "champion of and for live music" in the city.

All Austin mourns the passing of James White. Champion of and for live music in our city. So very sad. https://t.co/93cHrdkE9I

Hays County's vaccine portal filled up within 25 minutes. What do I do now?