'It's been so much time' | Dallas homeowner pays for pool, still stuck with hole in backyard 10 months later

Nearly 10 months after a pool company dug a hole in her backyard, MacKenzie McCarver said little has changed and she doesn't know when it will be finished. 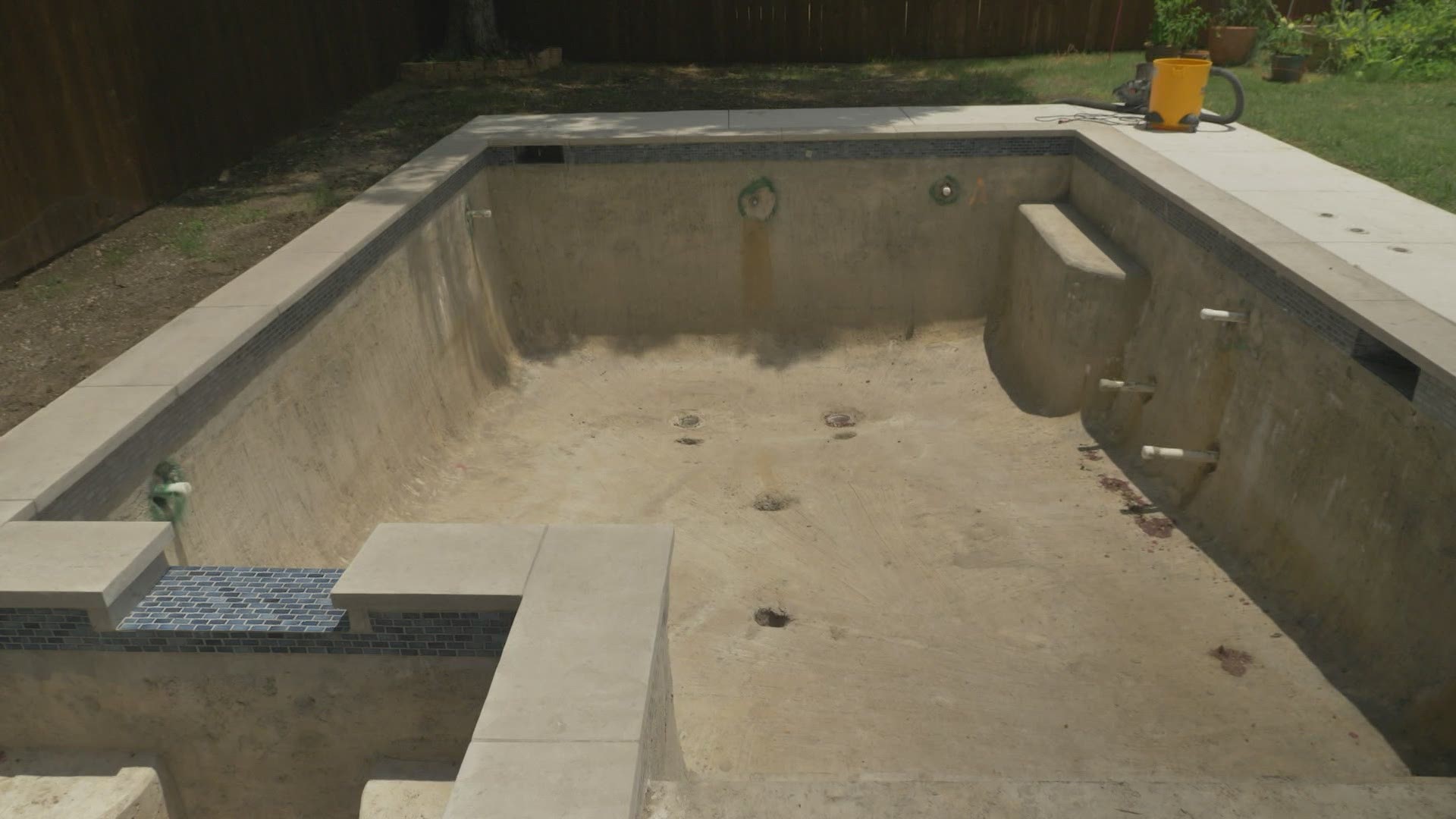 DALLAS — There are nearly 500 unfinished pools in Dallas from customers who received their pool permits in 2020, according to data from the City of Dallas.

MacKenzie McCarver is one of these people.

"It's been so much time waiting," McCarver said.

McCarver is married with two dogs, a 3-year-old daughter and another child on the way. She and her husband moved to their new Dallas house in April of 2020 with one specific goal in mind.

"It was actually something we were planning on from the moment we moved in," McCarver said. "We wanted it to be a place where people could come and enjoy themselves."

Last fall, they found a construction company and received a permit from the city of Dallas. The company dug a hole dug around November 2020, telling McCarver it would be done in 10-12 weeks.

Construction workers tore down part of her fence, leaving it exposed to the alley.

"It's been such a construction zone," McCarver said. "It feels like people who are making big investments are getting left behind."

McCarver said when she asks the company when it will be finished, they tell her they don't know.

"We've been living in this house with construction longer than we haven't," McCarver said. "I understand that 10-12 weeks in this environment might not be reasonable, but 10 months sure seems like a long time. It's been really frustrating."

After McCarver reached out to WFAA in early July and told the construction company she would be talking about what was happening, she said some workers came a couple of days later to clean up the yard and put the fence back up.

"Funny how that happens," McCarver said.

McCarver also said she has recently been learning about similar stories among some of her friends.

"I keep hearing from many people that they have these holes in their backyards that are not getting complete," McCarver said.

As of July 2021, 372 pool permits—both residential and commercial—have been completed in all of 2021, according to pool permit data from the city of Dallas. This is among 500 permits issued during that same time period.

In all of 2020, 372 permits have been completed, according to this same data. This is among 845 permits issued for the year.

This means there are 473 pools from Dallas permits issued in 2020 that are still not finished.

RELATED: Weekend forecast: hot and humid with a low chance for rain

Kris Sweckard is the director of sustainable development and construction for the City of Dallas. He said when the city issues a permit, that means it has gone through a planned review, and the construction company hired to build the pool can do so.

"Typically, people are bringing in paper plans, showing the dimensions of the pool, the property, the layout and the property lines," Sweckard said.

While this process had to be in person before the COVID-19 pandemic, there is now a way to do so online.

He said once the permit is issued, it's the responsibility of the developer or the company hired to build the pool.

"They manage the process from that point forward," Sweckard said. "There are certain points in the construction process that they will call us in for inspections, but it's in their hands."

Sweckard said once finished, the city has someone go back out to the pool site to verify it was built correctly.

"A permit is not completed until all construction work is done, they've passed their final inspection and gotten the OK to fill it with water and use it as a swimming pool," Sweckard said.

WFAA reached out multiple times to the pool company McCarver worked with but did not hear back.

To better understand these delays, WFAA reached out to a pool company that has been around for more than 20 years.

Rick Donoghue is the co-owner of BMR Pool and Patio, a different company than the one McCarver worked with.

"The adversity we've had to overcome just in 2020 and 2021, we've never seen before in our 22 years of business," Donoghue said. "It's turned our norm upside down."

Donoghue said labor shortages are one of many reasons the construction process has been delayed.

While the way Donoghue is conducting his business has changed, sales have increased as well—meaning his team has more pools to build.

Donoghue said a lot of the in-person inspections, analyses and conversations were moved online and over the phone during the start of the COVID-19 pandemic. This also slowed things down.

"We are now trying to set an expectation to our customers to allow 3-4 months for permitting and 3-4 months for construction," Donoghue said. "Pre-COVID, the process took about 3-4 months from signing the contract to swimming in the pool."

"Even if it's not what they want to hear, we try to set proper expectations upfront and be honest," Donoghue said.

McCarver is hoping for more communication and for a pool in the near future.

"I'm six months pregnant, so I would really like to cool off in a pool," McCarver said.