Unclaimed property: Forgotten treasures in a Texas vault, and billions of dollars that might be yours

The state is holding billions of dollars in cash and valuables, belonging to millions of you. We went on the hunt to reunite Texans with their long, lost fortunes. You might be next. 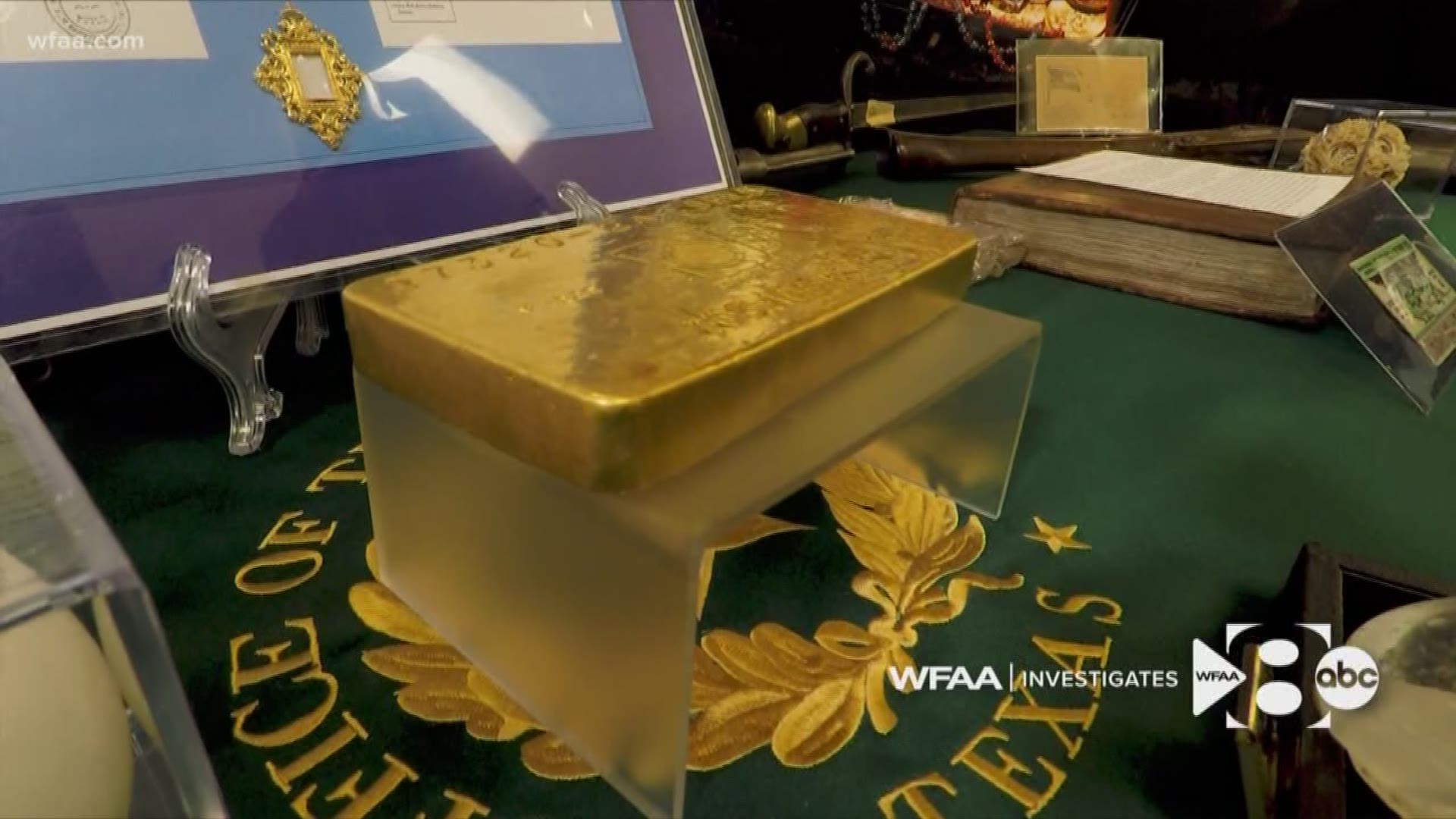 DALLAS — When Helen McMillan died alone, she took her secret with her.

We found McMillan’s secret, buried deep in a state bureaucracy that you may have heard of, but know little about.

Sound familiar? The state used to run ads in newspapers listing everyone’s abandoned money, encouraging them to claim it. Now, it’s all online on a searchable website run by the state Comptroller’s office.

Most people who bother to search find something – maybe an old, forgotten utility deposit, or a few bucks in a checking account abandoned long ago.

But we were curious. Who’s owed the most money? Are there big amounts?

And what else does the state have of ours that we don’t know about?

OK. First off, we discovered that the state has a vault. And yes, we were able to get inside it.

Credit: WFAA
The state Comptroller's office keeps unclaimed valuables in a vault -- and we got a peek inside.

There’s a $130,000 gold bar in there, as well as diamond jewelry and expensive watches. There’s also a math book by Sir Isaac Newton; a framed lock of John Lennon’s hair; and various other valuables.

Credit: WFAA
Is this your gold bar? It's worth about $130,000. The Comptroller is hanging onto it for you.

All the items belong to someone, but if they or their relatives don't claim them, they get auctioned off -- on eBay.

But let's talk about the cash.

“Any kind of payment that is owed to you that you don't take any action on, after a few years, companies are required to report it to the Comptroller's Office as unclaimed property,” said Bryant Clayton, who heads the state program.

The money is transferred to the state’s general revenue fund. It’s then up to Texans to go on the Comptroller's website, www.claimittexas.org, and file a claim to get it.

“I think the most valuable claim we paid was over $12 million to a single person,” Clayton said.

We asked the state for all the names and amounts of money, and built a database.

So, how much money is the state hoarding?

More than $5 billion, owed to 14 million people and businesses, some of it dating back to the 1980's.

Our data analysis traced more than $1 billion of that to North Texans, most of whom have no idea they have money sitting in the state treasury.

When we sorted our database by the largest amounts of money, Helen McMillan’s name was near the top of the list.

The Comptroller’s records didn’t say much. All we had was an apartment address near Cedar Springs west of the Dallas North Tollway. We went there looking for McMillan. Residents told us they recalled a widow living alone there, but she died years ago. No one recalled any family coming around at the time.

We looked for an obituary, but couldn’t find one.

We contacted the Dallas County Medical Examiner’s office, and they confirmed McMillan’s body was discovered in her apartment in 2012 by her landlord. There was no funeral home listed for her. Instead, she willed her body to UT Southwestern Medical School, records show.

We eventually got on the phone with Nancy Morris of Mansfield. She confirmed she was McMillan’s cousin. Morris said she had heard of the unclaimed property program, but knew very little about it.

We went to visit her, to show her what we had found.

Credit: WFAA
Helen McMillan left a small fortune behind. Her relatives had no idea -- until we showed up.

Records showed her cousin had a “credit balance” of $472,509. And because she had no children, Morris and any surviving family can try to claim the money.

Credit: WFAA
Nancy Morris, her family's historian, learns how much her cousin Helen McMillan left behind.

“It was a total shock,” said Morris, an antiques dealer who also collects her family’s historical documents and photos. “We thought everything was taken care of … It was kind of a good shock.”

Another name we found on the list was Kathleen Marie Perkins. She died in 2010.

She also had no children, but we were able to find her relatives.

Credit: WFAA
Kathleen Marie Perkins left thousands of dollars behind when she died.

“I felt like it was a blessing,” said Ardis Rider, Kathleen’s sister-in-law, about hearing from WFAA.

Records show that Perkins left behind $8,714 in unclaimed death benefits. The state was also holding $2,000 in wages Perkins never claimed from Dallas Independent School District, where she used to teach, and a utility deposit, $286, that the city of Dallas turned over to the state.

Rider said one of her sons was executor of Perkins’ estate, and she would inform him of what we’d found.

Both families say they will file claims with the state to get what their loved ones left behind.

Most of the unclaimed money we found belongs to people who died with no children or other heirs.

The largest pile of money we found is $2.6 million. It belongs to an Arlington man who died and left it behind for his family.

We found $111,665 that the city of Dallas is owed. (City officials dispute our number and claim it’s much lower, but a spokesperson assured us they were working to claim the taxpayers’ cash back. They also said they will step up checks for unclaimed property from once a year, to once a quarter.)

One of the strangest things we found was linked to a retired Farmers Branch tech worker. Records show he’s owed $183,399. We tracked down a friend of his in North Texas, and she said the man knew about the money, which apparently was an old pension he though he had lost, but he either didn’t know how to claim it, or kept putting it off. He has since returned to his native Japan, and didn’t respond to repeated attempts from us to reach him.

We also found money belonging to these folks:

Credit: Gerry Images
Pudge with the Rangers in 2000.

So far, WFAA tracked down more than a dozen people helping connect them with nearly $600,000.

In all, people we talked to say they only wished they’d known about this money years ago.

“The whole thing was shocking, just shocking – we weren't that hard to find. Y’all found us,” Nancy Morris said. “We can't thank Channel 8 enough. I do pray that you all find all those people on that list.”

Until then, don’t think that the state is going to come knocking on your door. All those billions of dollars are going to remain in the state’s bank account, and all that bling, safe in that vault – until it hits eBay.

Credit: WFAA
The Comptroller keeps your stuff under lock and key -- waiting for you to claim it.

Did you find money?

Here's how you get it: 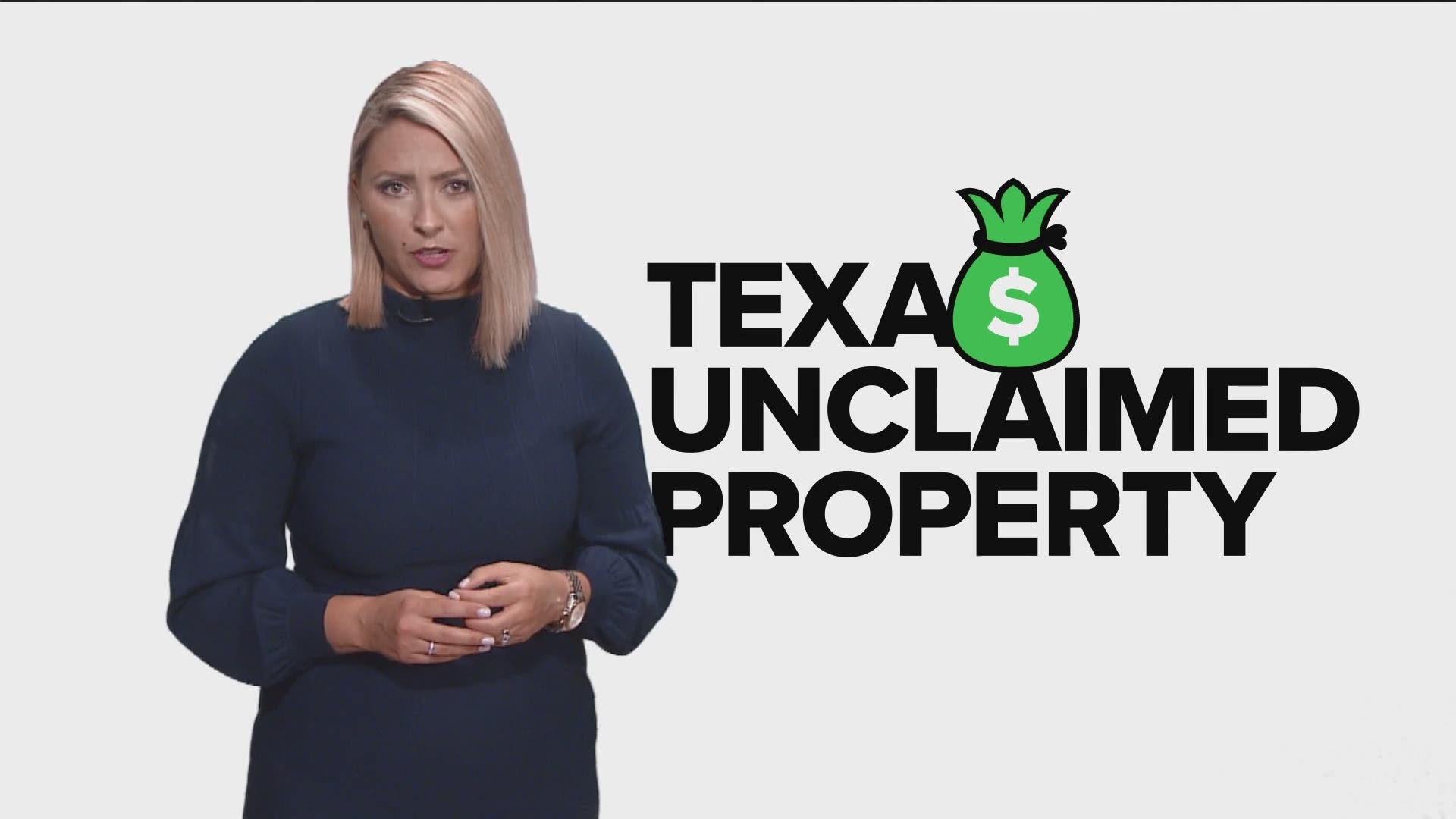 Find anything interesting? Are you having trouble getting your money? We don't have any special money claiming powers, but we'd still like to hear from you. Send your unclaimed property tales to unclaimedproperty@wfaa.com.

Got a tip? Email News 8 Investigates at investigates@wfaa.com.