Two out of every three Texas hospitals have never reported a 'bad' doctor to national clearinghouse, records show. 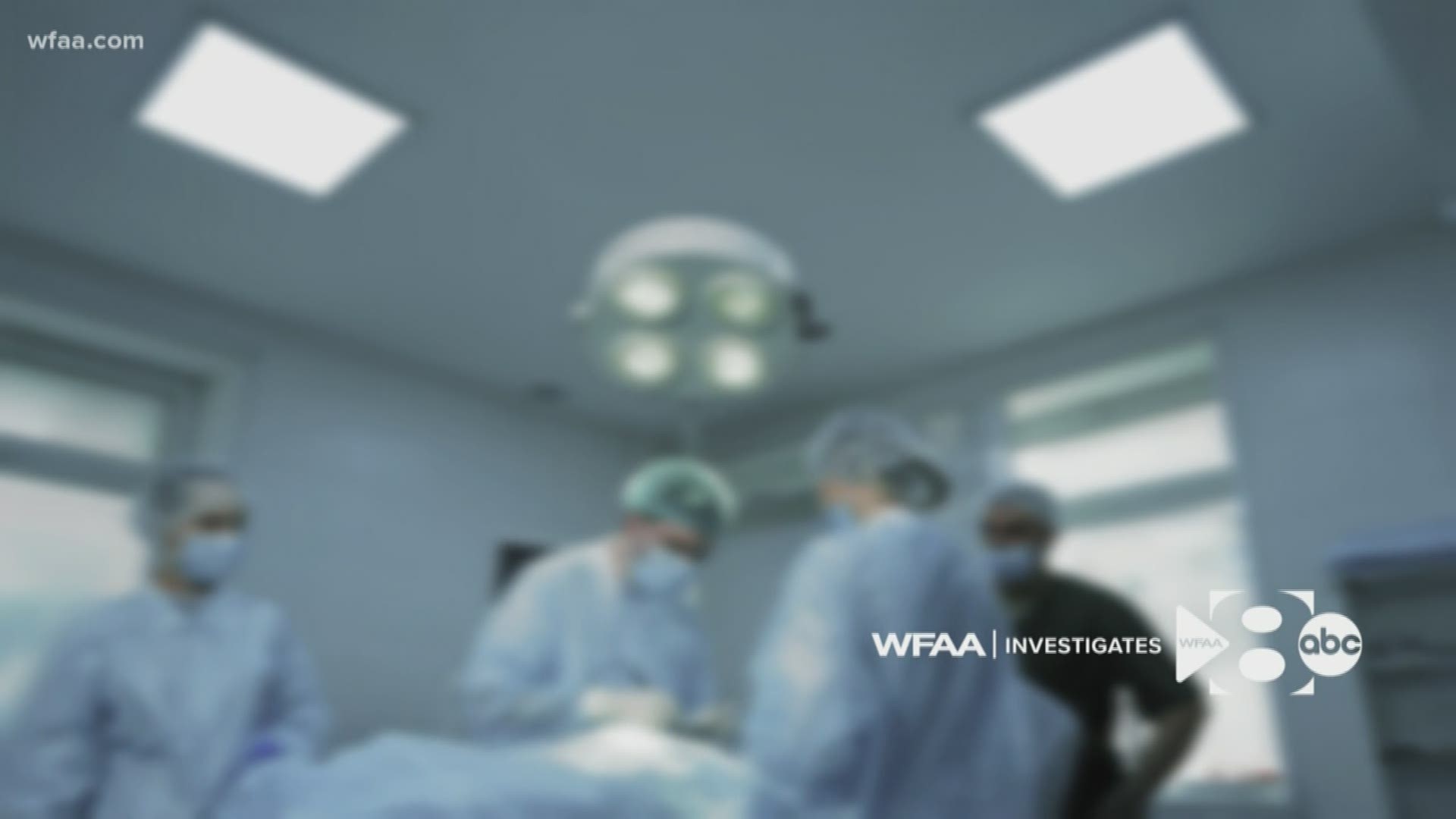 Congress set up the NPDB to serve as a key clearinghouse for hospitals to query prior to hiring doctors who may have had their clinical privileges revoked or restricted for medical competence or conduct.

A WFAA review, however, has found that hospitals often skirt reporting to the NPDB, with only half of the nation’s 6,500 hospitals having ever reported troubled doctors.

“It was created to prevent dangerous or incompetent doctors from traveling from hospital to hospital, or state to state, without being detected,” malpractice attorney Kay Van Wey told WFAA.

“It has not worked at all,” Van Wey added. “It’s a toothless tiger.”

Duntsch is in prison, having received a life sentence in 2017 for “injury to an elderly person” due to the care provided in his operating room.

RELATED: Prescription for Disaster: How loopholes in the system can let a bad doctor keep hurting people

“He was able to travel from hospital to hospital,” said Van Wey, who represented several clients maimed by Duntsch, later nicknamed “Dr. Death” in news articles and a podcast.

Duntsch would not speak with WFAA, but during trial his defense claimed he had inadequate training and blamed a health care system that allowed hospitals to continue to let him operate.

Prominent consumer and health advocates agreed that non-reporting to the system endangered patients.

Since 1990, WFAA found only 238 of Texas’ 662 hospitals have ever reported a single doctor. Among Texas hospitals that have reported troubled doctors, less than half – or 106 hospitals – have reported two or more doctors.

In an email response, an HRSA spokesman said the NPDB may contact a hospital to inquire about possible non-reporting.

“This contact typically leads to either the hospital explaining that the action it took (if any) does not meet NPDB reporting requirements, or the hospital submitting the missing report,” David Bowman, an HRSA spokesman, said in an email.

The NPDB, however, has no authority to fine hospitals for non-reporting, Bowman said. Although the NPDB may impose sanctions, Bowman said a “formal investigation” must first occur.

However, “there have been no formal investigations, hearings or sanctions” into non-reporting hospitals, Bowman said.

Even if sanctions had been imposed, NPDB sanctions are non-monetary and limited.

“Hospitals do not take action against doctors even though the doctors deserve it,” Wolfe said. “Or they take actions that are 20 days or 29 days, (which is) not reportable by law to the databank.”

“The hospital doesn’t lose the doctor from the staff,” Wolfe said. “But the public, the National Practitioner Data Bank…they’re deprived from finding out…”

Wolfe said another reason for non-reporting is “an unwarranted and irrational fear on the part of hospitals that they could get successfully sued” for reporting.

“They (hospitals) have a lot of protection from getting sued concerning their peer review, credentialing and reporting activities,” Van Wey told WFAA.

“Hospitals will tell you that they would like to do the right thing, but that they have to make business decisions based on the economics,” she added.

Van Wey said a peer review committee, for example, could recommend to discipline a doctor. But the hospital administration may override decisions recommended by peer review.

Patients are not allowed to check the names of doctors who have been disciplined. And the NPDB doesn’t reveal specific names of hospitals that have reported or failed to report doctors.

WFAA was able to report about the breakdown in Dallas-area hospitals not reporting Duntsch because of court records and testimony from his trial.

Three years after Duntsch got life, many experts told WFAA the system that hid Duntsch is no different than before his first failed operation.

“We failed as a profession to try to acknowledge, recognize and try to stop somebody who was harming the public,” former Texas Medical Board member Allan Shulkin said.

Hospital officials at a facility where Duntsch botched surgeries told WFAA that it had “strengthened our processes” for screening and evaluation of doctors. And officials at another hospital where he operated said their facility is now under new ownership and management, and the facility adheres to reporting guidelines and industry standards.

Duntsch’s patients and their families, however, told WFAA they fear little has changed regarding the failure of hospitals to discipline and report problem doctors.

“The system failed us,” said Angela Mayfield, wife of Duntsch patient Philip Mayfield. “The hospitals. Everyone that knew what Dr. Duntsch was doing. They all failed us.”

“The factors that caused Dr. Duntsch to get unleashed on the patients of Dallas could happen again,” Van Wey added.

How to check doctors:

The public may do online checks of Texas Medical Board records to determine if any disciplinary action has been taken against a specific doctor. The TMB's actions range from suspension, public reprimand or revocation of license.