More than 155,000 people with intellectual and developmental disabilities are waiting for Texas lawmakers to approve Medicaid funding to help them pay for therapy and other critical care. Thousands have died waiting. 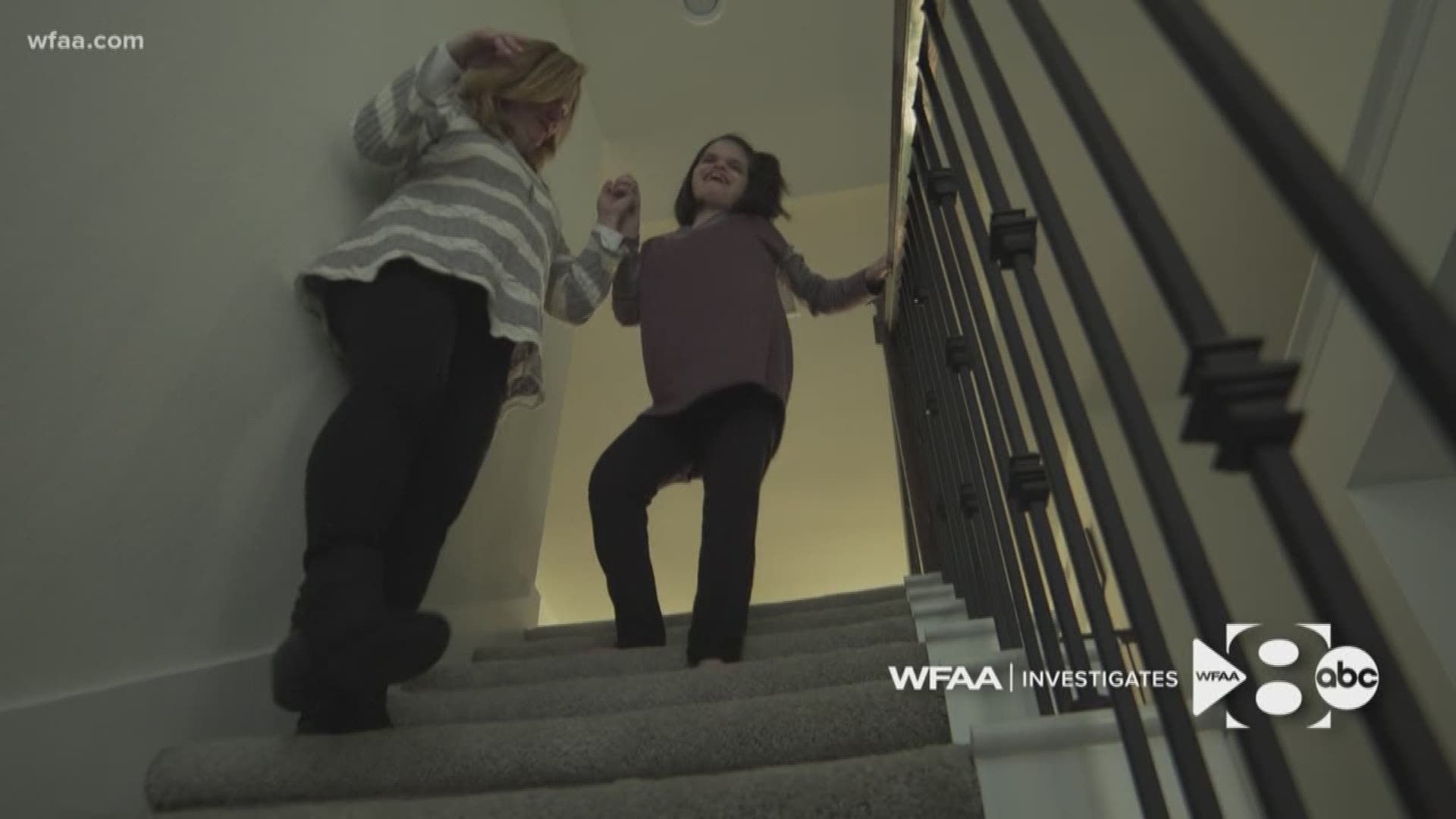 More than 155,000 families of people with intellectual disabilities have spent up to 10 years or more waiting for help from the state of Texas to pay for therapy and critically needed care, a WFAA investigation has found.

Many families find themselves watching their children grow into their teens and young adulthood as they wait for the state's help.

Braden cannot care for himself.

“If he was alone, and someone opened the door and said, ‘Hey, come here,’ he would probably go,” said Jennifer Erp, Braden's mother.

And then there’s Jayme. She’s 17. She has the mental capacity of a toddler, and her mother worries about her future.

Right now, both Braden and Jayme are in public school. But when they turn 22, by law, they can no longer attend classes.

But aging out of school is nowhere near the beginning of the crisis for these families. It just means their troubles will soon get a lot worse.

Braden and Jayme are two of the 155,000 people with special needs that have spent years waiting for much-needed help from the state of Texas. Many of them are children.

“They're families doing the best they can with the little they have to try and make it day to day in hopes that they'll eventually get through that 10-, 12-, 14-year period and finally start receiving state services that their loved one actually needs and deserves,” said Clay Boatright.

He has spent his life advocating for the rights of the intellectually and developmentally disabled. That includes his own two daughters. Both have autism and spent years on waiting lists before getting help.

The help is funded through Medicaid waivers.

The program allows families to get financial assistance for nursing care, therapies and, if necessary, group home living. The idea behind the programs is to keep the disabled out of institutions and in the community.

School districts are not required to tell parents that their children probably qualify for Medicaid assistance until the child turns 14.

Prior to that, struggling parents often learn about the lists from other special needs families or websites.

Shanel Tarrant is the mother of two autistic twin sons.

The McKinney resident spent 12 years on waiting lists before her family was able to get much-need emergency help from the state.

A single mother, Tarrant said she put her sons on the waiting lists after they were diagnosed when they were five.

When her sons were 16, the single mother had to quit her job and live in public housing to take care of her sons. They will turn 19 this summer.

“It’s very frustrating,” she said. “I don’t understand how the state of Texas claiming to be this pro-life state can treat people with disabilities the way they are being treated.”

The state now pays her about $140 a day to take care of them –  a much cheaper cost to taxpayers than if she’d been forced to put them in a state school.

“If it was your children, would you move heaven and earth to get them the help they need?” Tarrant said. “To me, how you treat the disabled and elder says a lot about who you are as a person and I feel like at least in the state of Texas, it’s all about the numbers. They don't seem to realize how those numbers translate into quality of life.”

Larry Evans is the father of a 22-year-old autistic son.

His son, Jacob, was 13 when he put him on the waiting lists. He didn’t know until he attended a special needs workshop that they existed.

The Flower Mound family has now been on the waiting lists for nine years.

Jacob has limited verbal skills and he doesn’t like to make eye contact. He has the intellect of a third grader, and his father says he may never be able to live on his own.

He recently called about of the waiting lists and was told the family would have to wait a minimum of another two years for help.

“The most vulnerable in our state are the least taken care of,” Evans said.

Jacob will age out of school at the end of May. The family worries what will happen next year.

“Right now, they’re not opening up any slots,” Evans said. “The only movement is when someone dies and that spot opens up.”

Why won’t lawmakers fund the program and cut the wait time?

For years, conservative leadership in Austin has been reluctant to boost anything related to Medicaid because it's chiefly perceived as a welfare handout.

Special needs families are caught in the political crossfire.

“People see Medicaid in a really negative light and they don’t really realize that it’s for people like my kid,” Braden’s mother said.

In the past two years, state records show that about 2,000 people died waiting for state services.

Braden was 11 when his mother put him on several of the state’s waiting lists. He’s now 20 – two years from the public school cutoff.

Braden’s father died when he was 11. Erp, a single mother, earns a living as an elementary school counselor. But Braden is her real full-time job.

Because she can’t get state aid, she pays for babysitters to watch her son while she’s at work.

She said recently when she asked where Braden was at on one of the waiting lists, they would not tell her. Two years ago, he was at about 40,000 on that list. If he ever reaches the top of that particular list, it would provide funding for group home living and other services.

“I don’t think he’s moved up very much,” she said. “What do you do when the school bus quits coming? I don’t know.”

Jayme also needs full-time care and her mother stays home to care for her. She has seizures. She can’t talk. She has trouble seeing and hearing well.

“She needs help with everyday tasks,” said Marisa Ellis, her mother. “She’s pretty much dependent on us for everything.”

Ellis moved her daughter to Texas when she was eight years old.

The family was in for a shock.

“This was a tough move to begin with,” she said.

Then she discovered the waiting lists.

They had lived in Kentucky and Missouri, both of which spend more on special needs kids than Texas.

Ellis said during the application process to get on the waiting lists, Texas treated her child as a number.

“There’s nothing personal involved in it,” she recalled. “They don’t ask you anything about her disabilities or anything.”

Boatright had a similar revelation when he put his daughters on the lists.

“You don't get assessed until you get to the top of it,” he said.

After eight years of waiting, Jayme reached the top of one of the lists in 2018.

“I felt like I had won the lottery,” her mother said. “The impact has been amazing.”

Jayme now gets occupational, speech and physical therapy that she wasn’t getting prior because it was too expensive. Ellis has noticed a change in her daughter.

There’s now also money to pay attendants to give Ellis a break, although the state’s reimbursement rate of $9.85 an hour makes it tough to find suitable caregivers. They even got help to pay for special equipment for one of their bathrooms.

But all that goes away when Jayme turns 21, which is when the particular program she qualified for expires. That’s why she remains on several other waiting lists.

Disability rights activists say it would be much more cost effective to put more funding toward the waiting lists than allowing people to end up in institutions.

“For every one person in a state supported living center you can support seven with a (Medicaid) waiver,” said Kyle Piccola of The Arc of Texas, an Austin-based group that fights for the rights of the intellectually and developmentally disabled.

State officials now estimate that it would cost an additional $2.3 billion in funding to eliminate all of the waiting lists.

On Friday, the legislative budget conference committee announced they had decided to fund 1,630 slots to reduce the waiting lists. Advocates say that means the waiting lists will continue to grow and grow, families will wait longer and longer and people with intellectual and developmental disabilities will be in ever greater danger of ending up institutionalized.

The state of Texas has six different waiting lists for Medicaid waiver programs that provide services for those with intellectual and developmental disabilities.

The Community Living and Assistance and Support Services, or CLASS, waiver, for example, provides funding for nursing, therapy, and respite care, but it does not provide funding for group home living or for residential living.

The Home and Community-based Services, or HCS, waiver is the most comprehensive because it will pay for group home living or other residential options. It also has the longest wait and the highest number of individuals waiting. It's also very popular. By the time someone's name comes to the top of the interest list, a significant majority choose to enroll in the HCS waiver. There are about 98,000 on that waiting list. Of those, about 18,000 of them have been waiting 10 years or more.

Navigatelifetexas.org provides information on various waiting lists and resources on how to sign up and navigate the system.