The death toll at Monticello West has reached 20 residents, the most of any facility in Dallas, Tarrant, Collin and Denton counties. 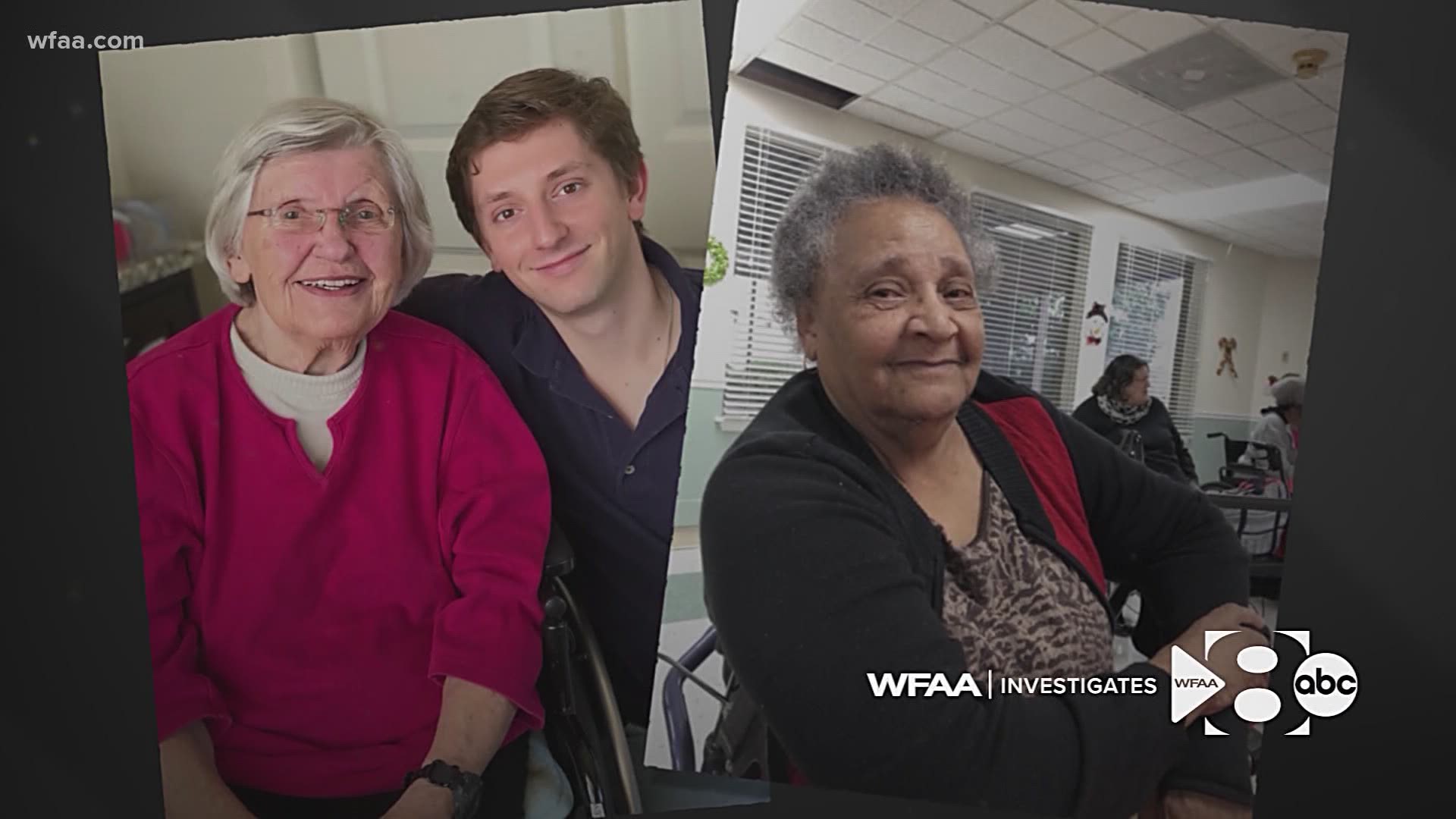 DALLAS, Texas — Karla Mackley and Ella Norman never met. But they have something in common.

Both lived in North Texas long-term care facilities. And both died from COVID-19.

Their children have never met either. But they share the anger, the pain of loss and the concern over the care their loved ones received.

“We entrust our loved ones with these nursing homes,” Ella's son, Calvin Norman, told WFAA. “To me, they wasn't ready for it.”

Karla Mackley lived in Monticello West, which bills itself on its website as the “go-to senior living community in the Park Cities.”

County records show 20 residents there have died of COVID-19 -- by far the most in any long-term care facility in Dallas, Tarrant, Collin and Denton counties.

Monticello had 151 residents. That means at least one person has died out of every 10 residents.

Skyline, unlike Monticello West, accepts Medicare. It received only one of five possible stars in federal Medicare reviews.

Skyline has had more than four dozen positive COVID-19 cases. Ella is one of four residents there who have died of the virus.

“If this virus gets a toe-hold in these facilities, it just sweeps through there and can wipe out many people quickly,” said Brian Lee, a former nursing home regulator and executive director of the nonprofit, Families for Better Care.

Texas Gov. Greg Abbott has ordered testing for all residents and staff of the state’s 1,224 nursing homes – roughly 230,000 people. State health officials told WFAA Wednesday that testing has been completed at more than 660 nursing home facilities and was underway at dozens of others.

“This effort is focused on nursing facilities specifically,” Kelli Weldon, a spokeswoman for the Texas Health and Human Services Commission.

At this point, the order is not being expanded to include other types of long-term care facilities -- places like Monticello West.

Weldon also told WFAA in an email that the agency is “actively investigating and closely monitoring all long-term care facilities in the state that have reported one or more positive cases of COVID-19.”

As the coronavirus pandemic disproportionally devastates long-term care facilities across the state, regulators in Austin continue to withhold the names of specific facilities that have had positive cases and deaths related to COVID-19.

Health officials claim such information is either not subject to the Texas Public Information Act or is “confidential” under state law. They have sought an Attorney General’s legal opinion that would justify their continued withholding of the information.

"If my mom had died that night, I wouldn’t have known"

Ella Norman was a retired chef. Calvin was her only child.

She moved into the Skyline Nursing Center about five years ago. Her older sister was already living there.

Ella stayed when her sister died a few years ago.

She had dementia and a chronic respiratory illness, but her health had been stable. She went through knee replacement surgery in February. She told her daughter-in-law she felt like “Wonder Woman” afterward.

Her son and other family members visited often, until nursing homes were closed to visitors in March.

In early April, Calvin Norman was unable to contact his mother by phone, so he and his wife went to the facility looking for answers. Calvin Norman said an administrator came outside and told him his mother had been taken to the hospital the day before.

“I was angry,” he said. “If my mom had died that night, I wouldn’t have known nothing about it.”

Calvin Norman and his wife said they also were troubled that the administrator came outside without a mask.

For the next few days, Calvin talked to his mom on the phone. He was not allowed to see her. It looked like Ella would recover. But late one night, he got a call that her oxygen levels had dropped and she’d been taken to the intensive care unit. She was eventually put on a ventilator.

The doctor called and said Ella wasn’t going to make it. Her kidneys were failing. Calvin said he had to decide whether to remove her from life support – all without ever getting a chance to see her in the hospital.

“I knew she wouldn’t want to suffer and I knew if the shoe was on the other foot, she wouldn’t let me suffer,” Calvin said. “I couldn’t even be with her to tell her that I loved her. I couldn’t be here for her, and that is the hardest thing – that and me making that decision to let her go.”

Over the past two years, Skyline has been fined about $28,000 by federal regulators. In September, prior to the COVID-19 pandemic, inspectors found Skyline “failed to establish and maintain an infection prevention and control program … to help prevent the development and transmission of communicable diseases.”

Skyline did not respond to WFAA’s repeated requests for comment. It has posted a statement on its website stating that it “follows every guideline provided by the CDC and CMS including restricting entry” and is “monitoring aggressively our staff and residents for signs and symptoms.”

“She would have lived a good life if this coronavirus didn't get her, and I really hold them responsible for her death,” Calvin Norman said.

Karla Mackley was born in Germany, survived the firebombing of Dresden during World War II and emigrated to the United States with a soldier. She became an accomplished photographer.

“Coming to 1950s suburban America was quite a change for her,” her daughter Kate Mackley said. ”She was just tough as nails but a lady at the same time.”

“They said it was the Highland Park alumni reunion,” Kate said.

“They were slow to shut down the main dining room,” Kate said. “I know my mother's doctor was furious about that.”

In a March 19 letter, management informed residents and families that it was ending “communal dining” and postponing “all group activities.”

As the crisis unfolded at Monticello West, the facility’s director, Josie Winland, posted videos on YouTube seeking to reassure families of residents.

“We are doing everything we can to keep this nasty little bug away from here,” she said in an April 2 video. “I implore you to be patient.”

On the video, she confirmed two residents and one staff member had tested positive, and that masks have been distributed to all residents.

“Our hallways and common spaces are filled with laughter and joy,” she said.

Five days later, in another YouTube video, she said there was a “very small number of families that are very insistent and scared and disappointed that we have not done a mass test at Monticello West.”

“First and foremost there are no tests here,” Winland said in the video. “The unfortunate thing about testing is that if we all tested negative today, that could change tomorrow so we really have to let cooler heads prevail when it comes to the notion of testing.”

That same day, Kate says she became concerned because her mother’s caregiver told her she was dehydrated and confused. She also could see on the camera installed in her mother’s room that she was crying out in pain.

“When I called and said, 'my mom's not doing well. Please check on her,' they really didn't take me seriously,” Kate said.

Kate said she told Monticello West that she wanted to have an outside nurse test her mother for COVID-19. She said Monticello’s head nurse told her that the director said “no one was to be tested there.”

That same day, her mother’s oxygen levels dropped. She was rushed to the hospital.

“She went through the end of her life alone, which is not at all what any of us would have expected,” her daughter said.

In a statement to WFAA, Winland called the deaths “heartbreaking” and said the facility "has seen residents and employees test positive despite our adherence to the latest guidance from ... all local, state and federal health authorities."

Winland said the facility was in daily contact with the county health department, which has done a “full review and assessment of our infection control procedures.”

She said the facility continued to follow “increased precautions” including restricting visitors, cancelling all “large, on-site social events and recreational activities,” screening all employees daily and requiring all staff to wear N95 masks while caring for residents.

As the COVID-19 crisis continues, long-term care facility regulators in Texas also are discovering significant problems that could aid the spread of the disease.

In an April 17 webinar by Texas Health and Human Services, a top regulatory official told operators that some facilities have been observed not screening people as they enter, while others let sick staff members continue to work.

“Providers have been allowing staff who are symptomatic to work,” said Renee Blanch-Haley, HHSC’s director of field operations. “So, they may have fever, or when they are screened they may not meet all the criteria to be cleared to come in, but they're still being allowed to work."

The families of Karla Mackley and Ella Norman want those in power to remember the faces of their dead mothers. They hope by speaking out, they can save others from dying of COVID-19 in long-term care facilities.

“They're dealing with the consequences of being slow in terms of their initial response,” Karla Mackley said of Monticello West. “It’s a ball rolling that they can’t stop.”

Got a tip? Email investigates@wfaa.com