The president of the Dallas Parks and Recreation Board is accused of conspiring with a top civic leader to limit the debate on the future of Fair Park. News 8 has obtained a copy of a letter in which the head of the new Fair Park Texas Foundation was allegedly proposing ways to rush through and limit debate on a new management contract to privatize Fair Park. 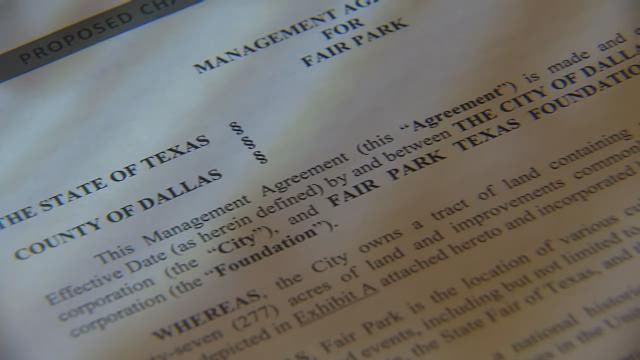 DALLAS -- The president of the Dallas Parks and Recreation Board is accused of conspiring with a top civic leader to limit the debate on the future of Fair Park.

News 8 has obtained a copy of a letter in which the head of the new Fair Park Texas Foundation was allegedly proposing ways to rush through and limit debate on a new management contract to privatize Fair Park.

While many city residents and politicians, including the mayor, favor a private foundation taking control of Fair Park away from the City of Dallas, details of how to do it have become divisive.

"The contract was being orchestrated behind doors without the board's consent and the board's knowledge of what was going on," Moreno said.

When the dust settled, Walt Humann, the man picked by Mayor Mike Rawlings to spearhead the takeover of Fair Park, stood up to voice his displeasure.

"Does anyone recognize what has just happened here?" Humann asked. "I've been up since one o'clock last night preparing, and five people automatically leave."

Humann was upset, in part, because his timetable to get the Fair Park privatization deal done was in jeopardy. That timetable was laid out in a July 9 letter to Parks and Recreation Board President Max Wells, who controls the agenda.

News 8 obtained a letter which has never been made public.

The letter from Humann lays out to Wells, "you would call for a Work Session on July 21st."

It continues... "you would include a TABLE (an agenda of items to discuss) which would list all the open items needed to finalize the Management Agreement."

Humann tells Wells, "no Management Agreement would be sent; only the TABLE (items to discuss) to confine discussion."

Humann also suggests certain actions be followed, "to show a willingness to compromise."

Again, Humann proposes that Wells, "focus the bulk of the discussion on specific topics listed in the TABLE (items to discuss)."

The letter in question.

We showed the letter to two of the Parks and Recreation Board members who walked out of that July 21 meeting.

First, to Jesse Moreno, who felt what was in the letter was what played out in the meeting on the 21st.

Board Member Paul Sims says he feels the same way after reading the content of the letter.

"Well, this is essentially what happened at the Park Board meeting, and this is why I and some others walked out," he said.

Moreno and Sims say they are upset that a workshop to discuss specifics of the Fair Park management contract may have been secretly conceived by Walt Humann to limit the debate back on July 21.

"This seems like an attempt to keep the citizens from having their voice," Sims said. "To limit the discussion to six, pre-defined items and to not let anyone else discuss anything else in this contract."

Humann has not responded to our request for an on-camera interview. When contacted by phone, he first said "I don't remember writing that letter."

When later pressed, Humann recalled, "I urged the July 21 meeting so we would have plenty of time to talk and have a two-way exchange." He said the letter to Wells was only "a proposal, not a demand."

Max Wells, who also declined an on-camera spoke to us by phone.

"I don't remember the exact discussion, but we didn't get far enough to where I really considered it," Wells said. "I think that was a meeting I missed."

But the video from July 21 shows Wells not only made the meeting, he informed the rest of the board the discussion would, in fact, be restricted.

"I am going to limit them, these six items, not for new information," he said.

The Fair Park privatization issue is on Thursday's Parks and Recreation Board agenda. The mayor is pushing hard for a vote.

Read the full letter from Humann below:

Humann Letter by wfaachannel8 on Scribd