Clearing The Air: We'll show you where kids are buying e-cigs, and how regulators missed their chance to stop an 'epidemic'

We watched a local police department bust a store for selling vapes to minors, and also analyzed internal Juul emails about their youth marketing. 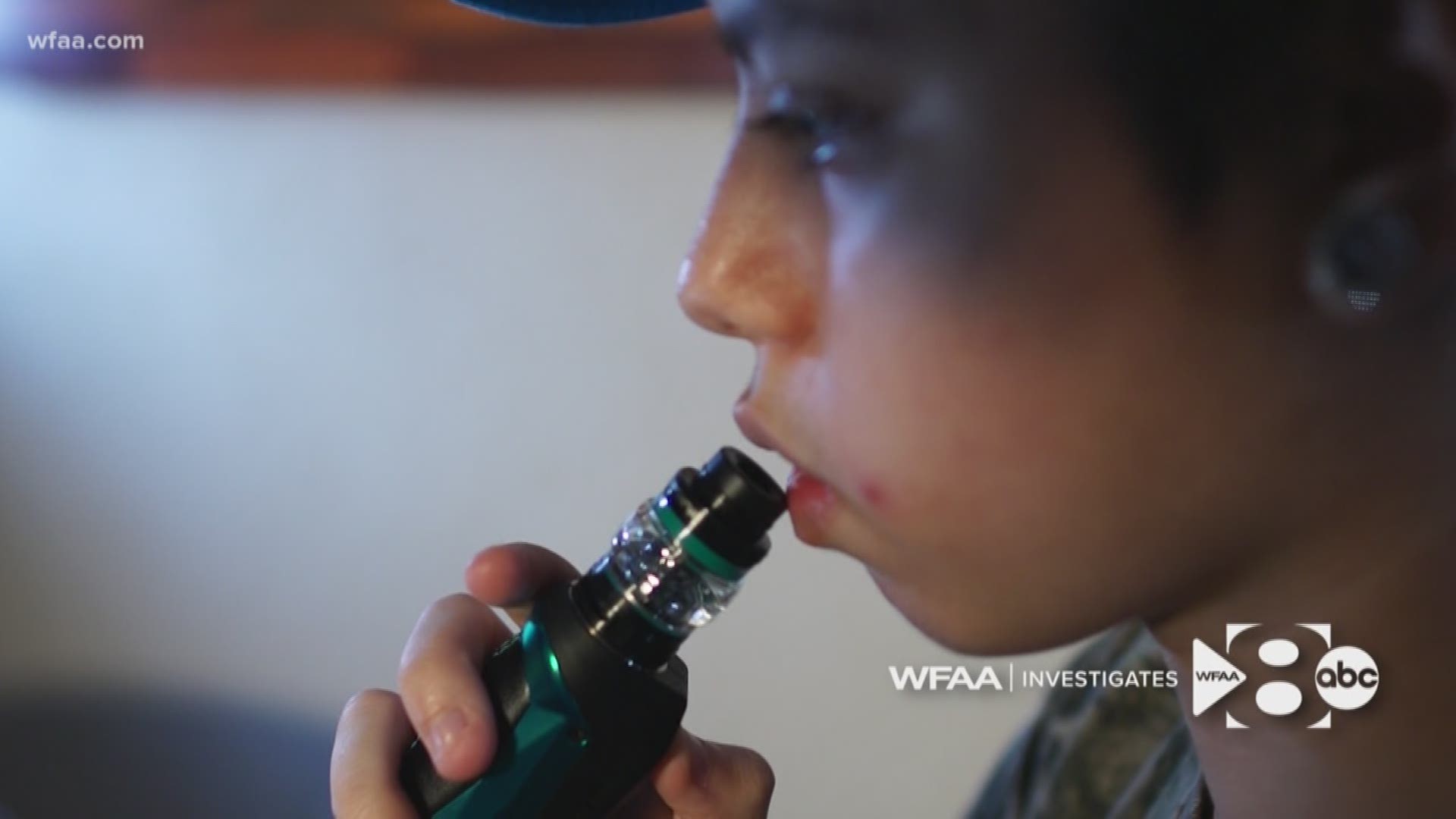 ALLEN, Texas — Note to parents: At the bottom of this story, we've included a vaping guide, including signs of vaping, teen vaping lingo, a parent helpline and how to talk to you kids about e-cigarettes.

It’s a fall evening in North Texas, and WFAA is on the front lines of an e-cigarette war.

A undercover 16-year-old, working with the cops, goes to the counter and asks for e-cigarettes.

But they sell to her anyway.

Police then enter the store and issue the clerk a citation.

This isn’t the first time the store has been caught. This same undercover minor says she bought there a few weeks prior.

“It was by mistake,” said a clerk on another day when we went looking for the owner, and an explanation. “He looked at the ID and it just happened by mistake. He did the wrong date.”

Local police aren’t the only ones doing these stings.

Their data is online and searchable though an interactive map. It shows which stores have been issued warning letters and fines nationwide.

Our analysis shows that Texas convenience stores have been caught and cited for illegally selling e-cigarettes to minors 333 times over the past two years.

“The FDA is very concerned about the problem of youth use of e-cigarettes,” said Ned Sharpless, acting FDA Commissioner. “This is a growing epidemic in our country.”

But there’s mounting evidence that this is an epidemic of the government’s own making.

First, the toll the rise of e-cigarettes has taken.

According to the U.S. Centers for Disease Control, at least count, 37 people in 24 states have died from vaping. Another 1,888 have gotten severe lung disease.

In Texas, state health officials say there has been one death and 165 cases of lung disease from vaping.

That includes Janie Lewis’ son. The 24-year-old has been in the hospital in Dallas for three months and at one point, was on life support because of vaping.

“When you see your son in a coma and he has more than 15 medications and tubes and doctors telling you he has less than 1 percent chance to live and you’re having to hear that multiple times, yeah, I can say it probably crossed my mind that perhaps they’re right,” Lewis said. “But I held onto my faith.”

How did we get here? Aren’t e-cigarettes certified as safe by the government? If not, why would they sell them in stores?

The answer is complicated.

In May 2016, the FDA classified vaping device as “tobacco products” and made plans to regulate them. That would mean e-cigarette companies would have to provide the government research showing their products aren’t harmful, and get approval for products before they go on sale to customers.

But those regulations kept getting delayed -- for years.

This year, a Maryland federal judge presiding over a lawsuit over the regulation set the deadline for it to kick in by May 2020.

“Given the uncertainty in the efficacy of e-cigarettes as smoking cessation devices, the overstated effects that a shorter deadline may have on manufacturers, the industry’s recalcitrance, the continued availability of e-cigarettes and their acknowledged appeal to youth, and the clear public health emergency, I find that a deadline is necessary," wrote U.S. District Judge Paul W. Grimm.

Then, a bombshell. A federal study found e-cigarette use among teens increase an alarming 78 percent last year.

“We run the risk of reversing the impressive gains we made in terms of tobacco cessation over recent decades by this resurgence of youth use of e-cigarettes,” the FDA’s Sharpless said.

Major e-cigarette maker Juul is facing waves of scrutiny in its role in the rapid spike, not just from the FDA, but teen vape users like Andrea Burns.

“I think Juul’s marketing practices in the very beginning, definitely pushed that crisis over the edge,” said the Dallas 19-year-old who said she started vaping in high school.

“They were definitely irresponsible -- like them going into schools is absolutely insane. They shouldn’t have ever been allowed to do that.”

But they were, and they did.

Internal Juul emails obtained by WFAA from a congressional oversight subcommittee in Washington D.C. show Juul paid large sums -- $10,000, $89,000 and even $134,000 -- to gain access to students in states like California, Maryland and Arizona.

The subcommittee characterized Juul’s efforts as a “sophisticated program” that “targeted teenagers and children, as young as eight years old… in order to become the nation’s largest seller of e-cigarettes.”

In one instance, according to testimony before Congress and a memo compiled by staff, Juul representatives told students their product was “totally safe” and "even demonstrated to the kids how to use a Juul."

Some of those children testified this year on Capitol Hill.

“For my classmates who were already vaping, it was a sigh of relief, because now, they were able to vape without any concern,” said Caleb Mintz, who told lawmakers he was in ninth grade when Juul came to his school “Now they thought it was just a flavor device that didn’t have any harmful substances in it.”

“We never designed our marketing to appeal to youth,” a Juul spokesperson wrote in a statement to WFAA. “That is why we are focusing on taking aggressive actions to reduce the access and appeal of our products.”

Those actions, according to the company, include suspending all advertising in the U.S., and implementing new technology in stores that automatically restricts the sale of Juul products until a government-issued ID is electronically scanned.

Juul’s CEO Kevin Burns recently resigned, and it’s been reported that the company plans to cut 500 jobs out of a workforce of about 4,000.

It’s also fighting several lawsuits around the country, including one filed by its ousted former senior vice president of finance. Siddharth Breja alleges in his lawsuit that Juul failed to recall or warn the public this year about 1 million mint-flavored pods that he claims were contaminated.

“(Then-CEO Ken) Burns’ and upper management’s disregard for the health and safety of Juul’s customers, many of whom are children and young adults, are evidenced in Mr. Burns’ statements such as, ‘Half our customers are drunk and vaping like mo-fo’s, who the [expletive] is going to notice the quality of our pods,'" Breja's lawsuit states.

“He was terminated in March 2019 because he failed to demonstrate the leadership qualities needed in his role,” the company said in a statement to WFAA. “The allegations concerning safety issues with Juul products are equally meritless, and we already investigated the underlying manufacturing issue and determined the product met all applicable specifications.”

Andrea Burns said she probably won’t quit vaping. But she has this advice to underage kids thinking of trying it.

The Partnership for Drug-Free Kids compiled a guide for parents on how to know if your child is vaping nicotine liquid or THC, and what to do about it.

The following is an excerpt from their guide: What are the signs of vaping?

Equipment: You may find devices that look like flash drives, e-juice bottles, pods (that contain e-juice) or product packaging. Aside from leaf marijuana, gel jars that contain dabs, small tools to scoop dabs and cartridges that contain THC oil are signs of vaping marijuana.

Online purchases / packages in the mail / store purchases: Be on the lookout for purchases made online and charged to your credit card or unusual packages that arrive in the mail. Kids also buy them at big box stores, gas stations or from other friends.

Scent: While the smell from vaping is faint, you may catch a whiff of a flavoring where there appears to be no other source. For example, if you smell bubble gum or chocolate cake, take note.

Increased thirst / nose bleeds: Some of the chemicals used in e-juices have the effect of drying out the mouth and nasal passages. As a result, some kids drink more liquids or seem more prone to nose bleeds.

Decreased caffeine use: Some teens and young adults develop a sensitivity to caffeine. If your child drank caffeinated energy drinks and quits, it may be as a result of vaping.

Vaping lingo: You may see vape lingo in text messages such as “atty” for an atomizer, “VG” for vegetable glycerin found in e-juice or “sauce” referring to e-juice. Kids often brag about their vaping exploits on social media. Look for pictures on Instagram or YouTube or check their Twitter accounts.

Appearance and behavior changes: Just like smoking, vaping marijuana can result in bloodshot eyes, dry mouth and thirst, increased appetite and shifts in behavior and mood. Sometimes, there is a noticeable change in friends and a decrease in activities that were once enjoyed.

Source: The Partnership for Drug-Free Kids

Resources for Parents and Teachers: