“I had the distinct feeling they just didn't want to know if anybody was positive at this building," resident says. 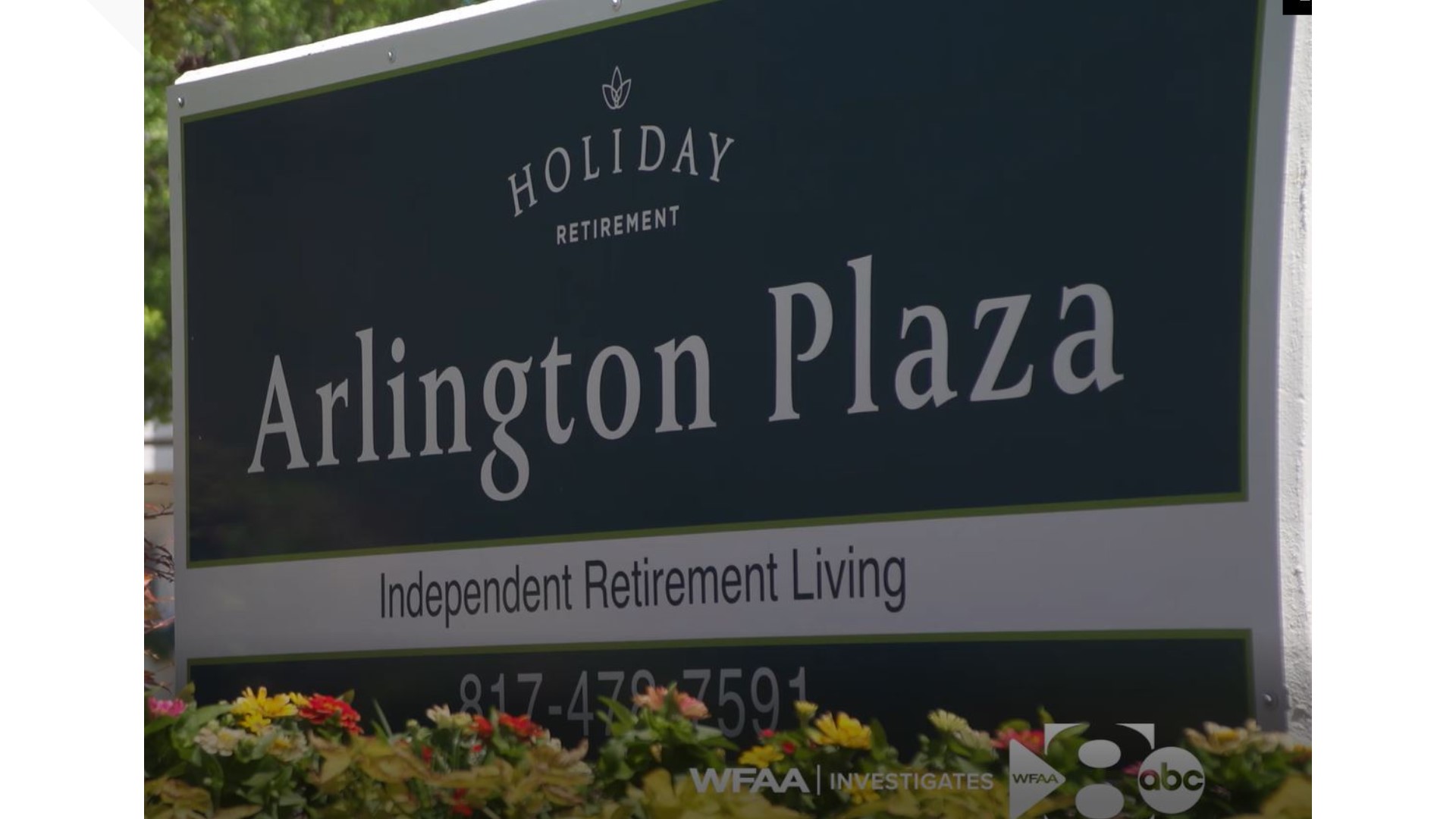 ARLINGTON, Texas — When COVID-19 began to spread, Susan Swain worried it may have invaded the Arlington retirement community she’s lived in for three years.

“I have COPD, diabetes, congestive heart failure and obesity,” said Swain, a 72-year-old retired teacher. “I knew that if I ever got it, I'd be dead.”

So Swain reached out to her own nurse practitioner, Connie Lawriw, for help. Lawriw agreed to make arraignments for Swain and the residents of Arlington Plaza to get tested.

Susan and resident Karen McKee went door to door asking other residents if they wanted Lawriw to get them tested. But according to Swain and McKee, when management found out, they discouraged residents from getting tested.

“Their displeasure was very apparent,” said McKee, 65-year-old retired oilfield worker with multiple sclerosis. “I had the distinct feeling they just didn't want to know if anybody was positive at this building.”

Swain told WFAA some residents told her they had been approached by management who urged them “not to take the best because it’s not necessary.” Swain also says a manager told her that she was causing trouble.

Arlington Plaza is owned by Holiday Retirement, a company with similar properties across the nation.

In a statement, the company’s communications manager, Alyssa Cerrito, told WFAA “there was no act of retaliation.”

“There was no act of encouragement not to be tested,” Cerrito said.

At Arlington Plaza, residents live in their own apartments. It is an independent living facility with 84 residents.

In mid-March, as a precaution, management closed down the communal dining room and began delivering meals to the resident’s rooms. But visitors were still coming and going, and Swain worried the virus might be spreading throughout the complex.

On March 25, Lawriw oversaw the testing of 29 residents – less than half the residents.

On that same day, residents were also given a letter stating that testing was being done and that if there was a “confirmed COVID-19 case, … all residents will be asked to isolate in their apartment until otherwise notified.”

Swain, however, says that she was told to immediately isolate to her room on the day the testing was done but before the results were back. She believes this was in retaliation for having pushed for the testing.

“I'm just terribly dissatisfied with the way management has been handling this whole thing,” Swain said. “I truly am.”

Out of the 29 residents who took the test, three tested positive. A fourth resident who initially tested negative was taken to an hospital about a week later, where she tested positive for COVID-19.

The Tarrant County Health Department also confirmed that one home health care agency employee who was caring for a resident also tested positive.

Linda Stone, one of the four residents who tested positive, says she was surprised when she tested positive for COVID-19 because she was not experiencing symptoms.

She said she thought the testing was “important, because there’s so many people living under the same roof. It was a good thing to know if there were others that were here” with the virus.

Still, Swain and McKee believe the majority of residents have never been tested.

“I really still believe there are people in this building that have been exposed to it that are either carriers or are sick with it,” Swain said.

Lawriw believes that if more residents had been tested, more cases of COVID-19 would have been found.

She told WFAA that she had access to enough kits and all of the residents could have been tested.

“This should be a time that we can all be proactive in our communities,” she said. “Not everyone is getting that.”

The company’s statement also noted that at that time in March, “public health advisories were recommending that testing be limited to individuals exhibiting symptoms of COVID-19.”

“Arlington Plaza's management team, as well as Holiday's corporate office, have been in contact with the local health department,” the statement said. “They have assured us that Arlington Plaza has followed all recommended guidelines and procedures."

Residents have now been insolated in their apartments for more than a month. In an April 23 letter, management thanked the residents for being patient and notified them that the “current state of quarantine had been extended through May 5.

The letter said the quarantine was being extended because the fourth resident was still testing positive for COVID-19. That resident has been in the hospital for weeks.

Swain says she is grateful to Lawriw for helping them get tested.

“Her heart is with her patients,” she said.

Swain and McKee also believe that in pushing for testing, they saved lives and prevented COVID-19 from spreading.

“I just do not understand the complacency that happened on early on here,” McKee said.