'I used to get bullied a lot': Myles Turner reaches out to Plano girl battling cancer

The Euless Trinity alum now stars for Indiana Pacers. He shared a moment to support A'Myah Moon before his game versus the Mavericks on Sunday 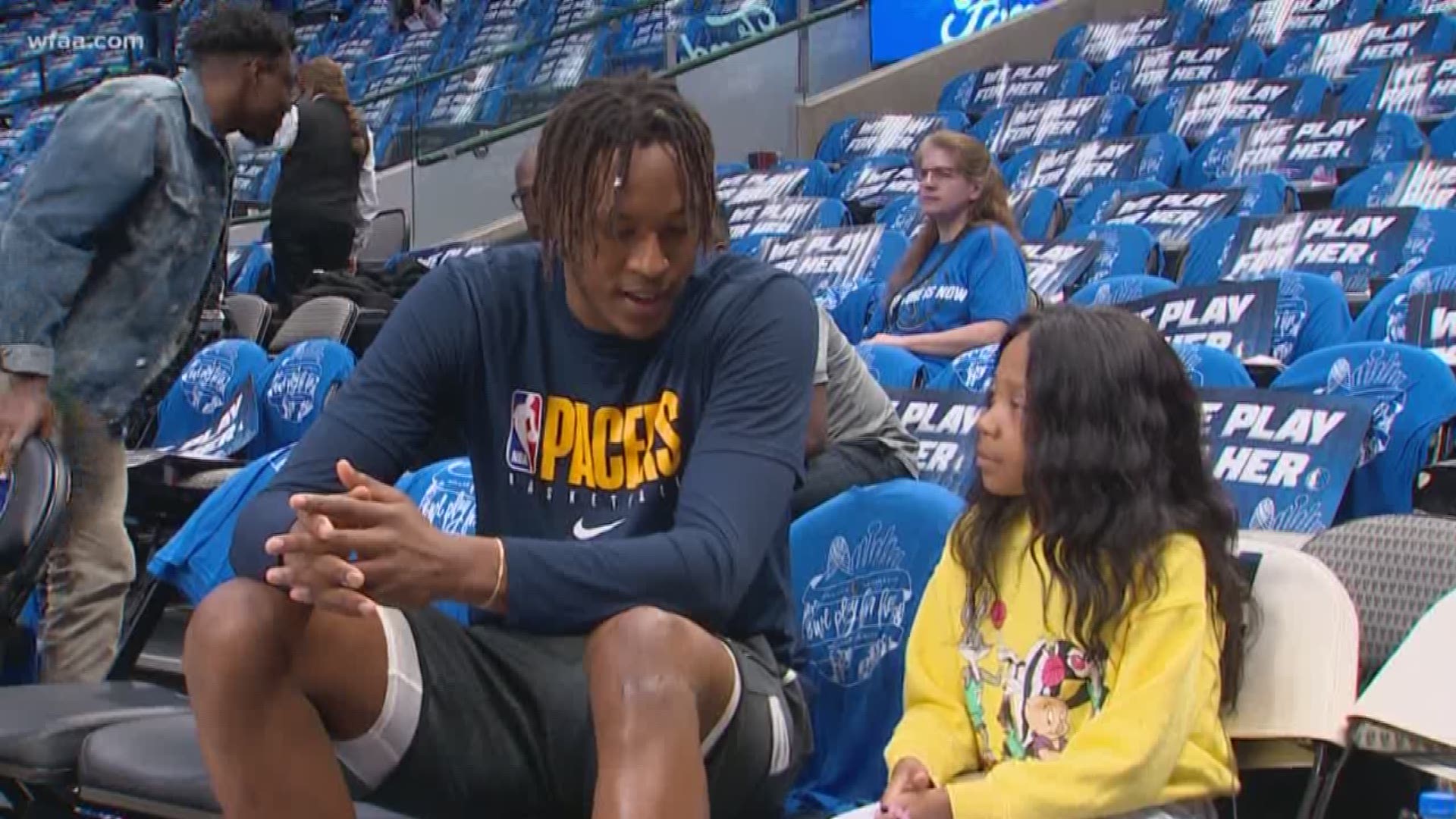 DALLAS — A'Myah Moon loves volleyball, gymnastics and basketball. Watching those sports up close is even better.

"I’ve been to my brother’s basketball game," A’Myah said.

Sunday marked a whole new moment in the 6th-grader's hoops journey and battle against cancer and bullying.

Turner, 23, arranged for A’Myah, her mother Syreeta Smith and other family members to sit close to the action against the Mavericks at the American Airlines Center on Sunday evening.

Before the game, he sat with A’Myah courtside and opened up about a topic Turner says he faced long before he became a first-round NBA draft pick in 2015.

"Believe it or not, I know I’m tall now, and I do other stuff but when I was a kid, I used to get bullied a lot," Turner told A’Myah. "You can always be kind to people. No matter what people are doing to you, don’t ever let that affect how you are as a person.”

RELATED: Her wig was pulled off and other children bullied her. Now this Plano girl battling cancer has an 'army' of supporters

A’Myah's meeting with Turner marked another moment in a series of positive experiences for the 11-year-old after her mother shared with WFAA one of A’Myah's most painful moments in February.

A’Myah is battling a rare form of cancer and lost her hair during chemotherapy treatments.

Then, the 6th-grader was allegedly the target of an act of bullying at her school that escalated to what the child’s family described to WFAA in February as "a humiliating prank by one of her classmates."

Since A’Myah’s family began speaking out, people from across the country have become warriors for A’Myah and have supported the family’s fight against bullying. Supporters include the mayor of Plano, members of Sigma Gamma Rho Sorority, local churches, police and radio hosts.

Smith says the attention has been mostly positive and entirely unpredictable for her daughter, who initially wanted nothing more than to be a regular kid and keep her cancer diagnosis private.

"I just hope it helps to show love to other people and kindness," Smith said. "Whether people are sick or not because you never know at the end of the day."

RELATED: Photographer arranges special photoshoot for family of Plano girl battling cancer after she was bullied in school

A’Myah didn't let Turner leave their brief meeting without asking for the ultimate keepsake: A selfie.

Credit: Myles Turner
Myles Turner, a Euless Trinity alum, poses for a selfie with A'Myah Moon before the Pacers game versus the Mavericks on Sunday March 8, 2020.