The sixth-grader says a student who had been picking on her, humiliated her in front of other students at Bowman Middle School. 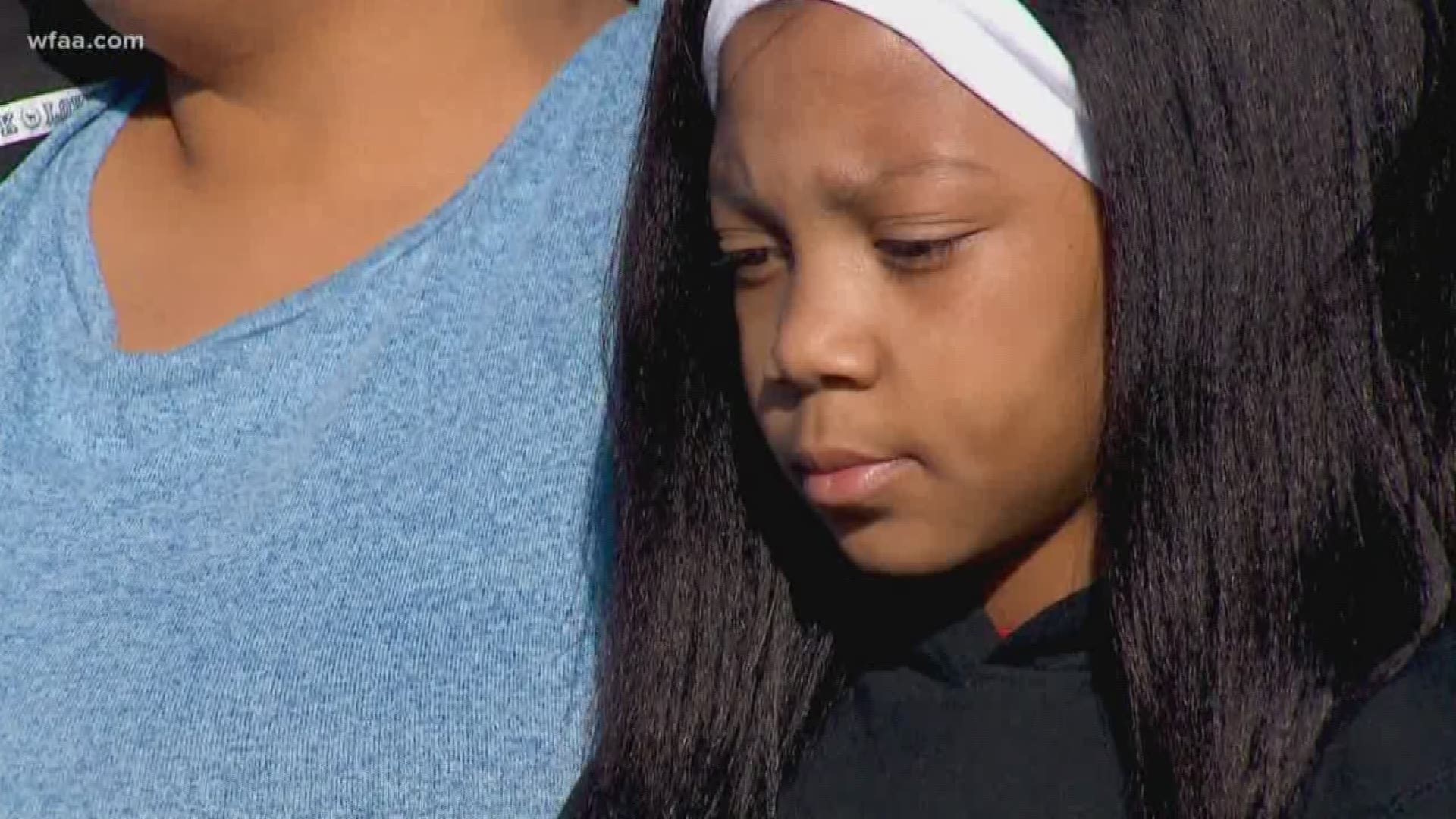 PLANO, Texas — Their loud chants could be heard Friday outside Bowman Middle School as students were dismissed. Nearly two dozen protesters, many holding signs, were delivering a strong message against bullying.

“Stop the bullies,” the group shouted. “Save a life!”

Members of the group were staging the demonstration in support of A'Myah Moon. The 11-year-old sixth-grader was allegedly the target of an act of bullying that escalated to, what the child’s family describes as, "a humiliating prank by one of her classmates."

Smith says her daughter was being picked on and bullied over her appearance.

The family says Moon was diagnosed with a rare cancer, just over one year ago. The girl has weekly doctor’s visits, bi-weekly chemotherapy sessions, and regular blood transfusions to treat her illness.

The child lost all of her hair as a result of chemo treatments.

Credit: WFAA
Moon was diagnosed with a rare cancer just over one year ago.

"So, when she started school back in October, we got her a wig so she could feel confident, and kind of fit in and feel normal," Smith said.

The wig, family members say, gave Moon a certain sense of security in school. That security was ripped away when her wig was ripped off her head and allegedly called derogatory names in front of other students.

"I just want to leave school forever, and don’t want to have no friends, no more," Moon said.

The sixth-grader said she ran to a restroom, locked herself inside, and cried.

"I got really sad, and I got dizzy and I left," Moon said.

A spokesperson from the Plano Independent School District released a statement late Friday afternoon, saying the safety and well being of all its students it a priority.

The statement went on to say:

Bowman Middle School and Plano ISD administrators have been responding to the situation and are working closely with all involved students and their parents. While we cannot discuss disciplinary measures as it relates to a specific student or students, our response to any behavioral concerns is always in accordance with district policy and the Plano ISD Student Code of Conduct. Plano ISD students are expected to treat one another with respect and civility and we will continue to reinforce this expectation.

The school district’s response hasn’t been swift enough, according to Moon’s family members, other parents, and concerned community members.

All showed up to the anti-bully protest outside Bowman Middle School and have been sending messages of support to the child’s family online.

Moon’s grandmother, Shelia Walker, says she wants everyone to know bullying is a serious issue.

“We didn’t know how real it was until our own child started going through it,” Walker said.

Moon and her family said they just want her school to be a place where she can take her mind off of her illness.

”She’s just trying to be a normal 11-year-old and it’s hard when you’ve got to fight a fight on top of fight," Walker said.

The family is urging all parents to speak with their children about the impact bullying can have on others.

”We won’t tolerate it,” Smith said.

Moon’s family said a close relative of the child who snatched her wig called Walker, on Friday, to apologize about the incident.