Nearly every day, he's been painting powerful portraits on Dallas' plywood, telling the stories of men, women and children who have died at the hands of police. 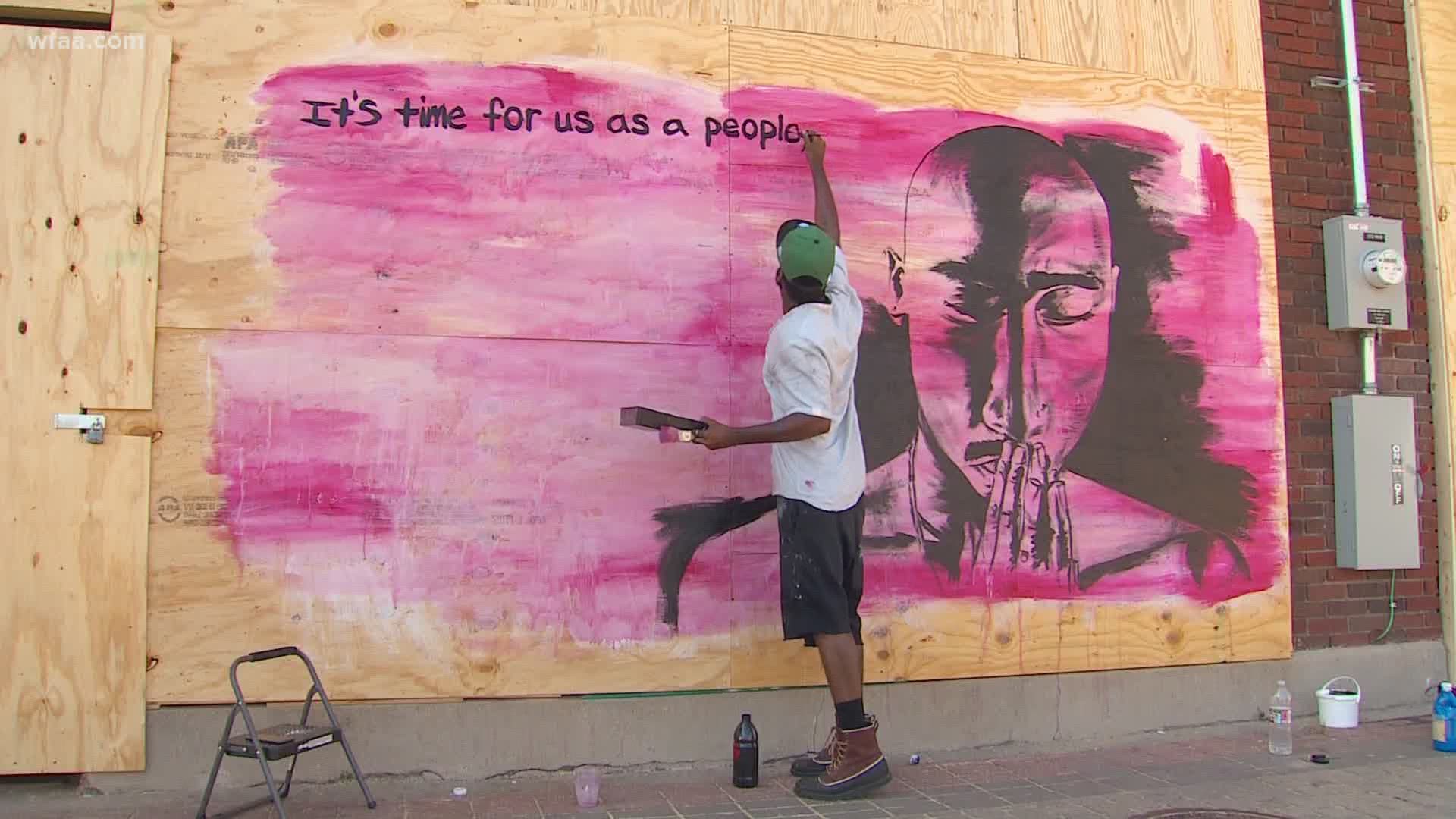 DALLAS — Gabriel Thomas sees the world a little differently. Where others see blight or destruction, Thomas sees an opportunity to make a more beautiful world.

"As soon as those boards went up, I looked at them and I saw canvases," Thomas said.

Thomas, a Dallas artist, has been painting the many plywood boards that went up to cover restaurants, bars and shops in Deep Ellum after protests erupted in response to police violence across the country.

"I grew up in Milwaukee and there was this thing where people in neighborhoods with boarded-up homes wanted to change what they saw," he explained. "They didn't like seeing those boards so they would paint beautiful murals all over their neighborhood. I think I was inspired by that."

The 31-year-old has no shortage of canvases in this current moment. Nearly every day, he's been painting powerful portraits on Dallas' plywood, telling the stories of men, women and children who have died at the hands of police, as well as stories of leaders who have searched for a better way.

"I just did MLK the other day because my message is one of love," Thomas said.

Thomas started this series of work the day protests began in Dallas, painting George Floyd, Atatiana Jefferson, Jordan Edwards and Botham Jean. All four are black men and women who were killed by police. Edwards was only 15.

The portraits have been stopping people of all races in their tracks, prompting them to look these men and women in the eyes and ask difficult questions from within.

"I want these murals to spark inspiration to treat each other with care, kindness and love," Thomas said.

Only one painting has been taken down, the portrait of Derek Chauvin, the officer who killed George Floyd in Minneapolis.

"When that was all happening, I had people coming to defend me. That meant a lot. But it's kind of poetic that that man was 'taken down,'" Thomas said.

Thomas was inspired to become an artist when he was just 5 years old, watching his older cousin Theus Meyers create his own art. Now Thomas says he's inspired by family as well as a need for change in our world.

Thanks to social media, Thomas' work has been viewed around the world.

If you would like to support this local artist and his work, you can visit his fundraising site or contribute via cashapp at "$gabbycaprice."