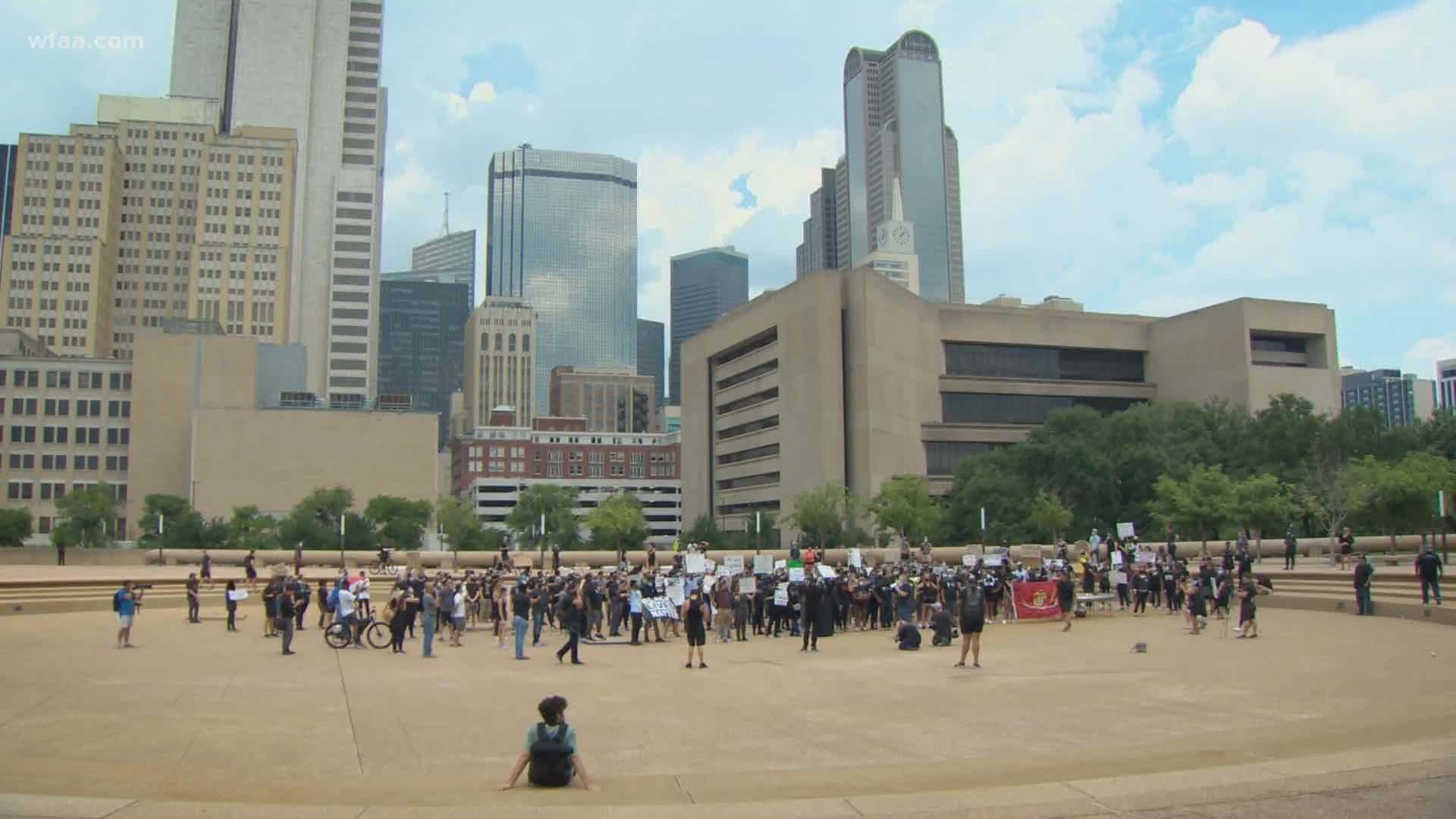 DALLAS — A large group of protesters gathered on the plaza outside Dallas City Hall on Tuesday. Many of them were dressed in black clothing and carrying signs.

Their demonstration was intended to be a sit-in to address black lives who have been victims of police brutality, in light of the tragic death of George Floyd.

The protest outside City Hall was intentionally scheduled at the same time Gov. Greg Abbott was meeting, inside, with the mayors and police chiefs from Dallas and Fort Worth.

At one point, the organizers addressed what some are describing as the chaotic scenes that played out on the Margaret Hunt Hill Bridge on Monday night. Hundreds of peaceful protesters crossing the bridge were arrested and detained on the bridge for hours.

“We were quickly advocating for the release of every single one of those people demonstrating,” Narvaez told the crowd.

The call for arrests on Monday came from Dallas Police Chief Renee Hall.

”There are many who questioned and are not happy with the decisions that I made yesterday,” Hall said during a press conference.

The police chief acknowledges the group of protesters from Monday assembled peacefully outside the Frank Crowley Courthouse after the city’s newly imposed curfew. She says when the group began marching onto the bridge, they were breaking the law.

”We warned them, they did not stop,” Hall explained. “They decided to take a knee on the bridge and hold their hands up and say don’t shoot.”

Protesters claim their plan was to walk across the bridge. Activist and protest organizer Dominique Alexander said they never intended on stopping nor blocking the road.

”They started to box us in. They started putting gas. Tear gassing us,” Alexander explained.

City leaders and police confirm it wasn’t tear gas, but smoke was used in the crowd.

Protesters say they dropped to the ground chanting ‘Hands up! Don’t shoot!’ to let police know they weren’t a threat.

“We warned them, they did not stop," Hall said. "They decided to take a knee on the bridge.”

Protesters were cuffed with zip-ties. Some of the people were placed on DART buses. The plan was to shuttle the arrested protesters to jail.

In a Facebook live video from the scene, Councilman Adam Bazaldua said city leaders stepped in to stop the protesters from going to jail on public buses.

"There was definitely advocacy from council members to make sure that the DART bus that was brought up here was not used, because we’ve seen the significance the bus plays in the civil rights movement," Bazaldua said. "I think it would be extremely ass backwards for us to continue to stuff protesters into a bus.”

Chief Hall said the decision was made to not send the protesters to jail, because the crowd was peaceful and due to overcrowding issues in the county facility. 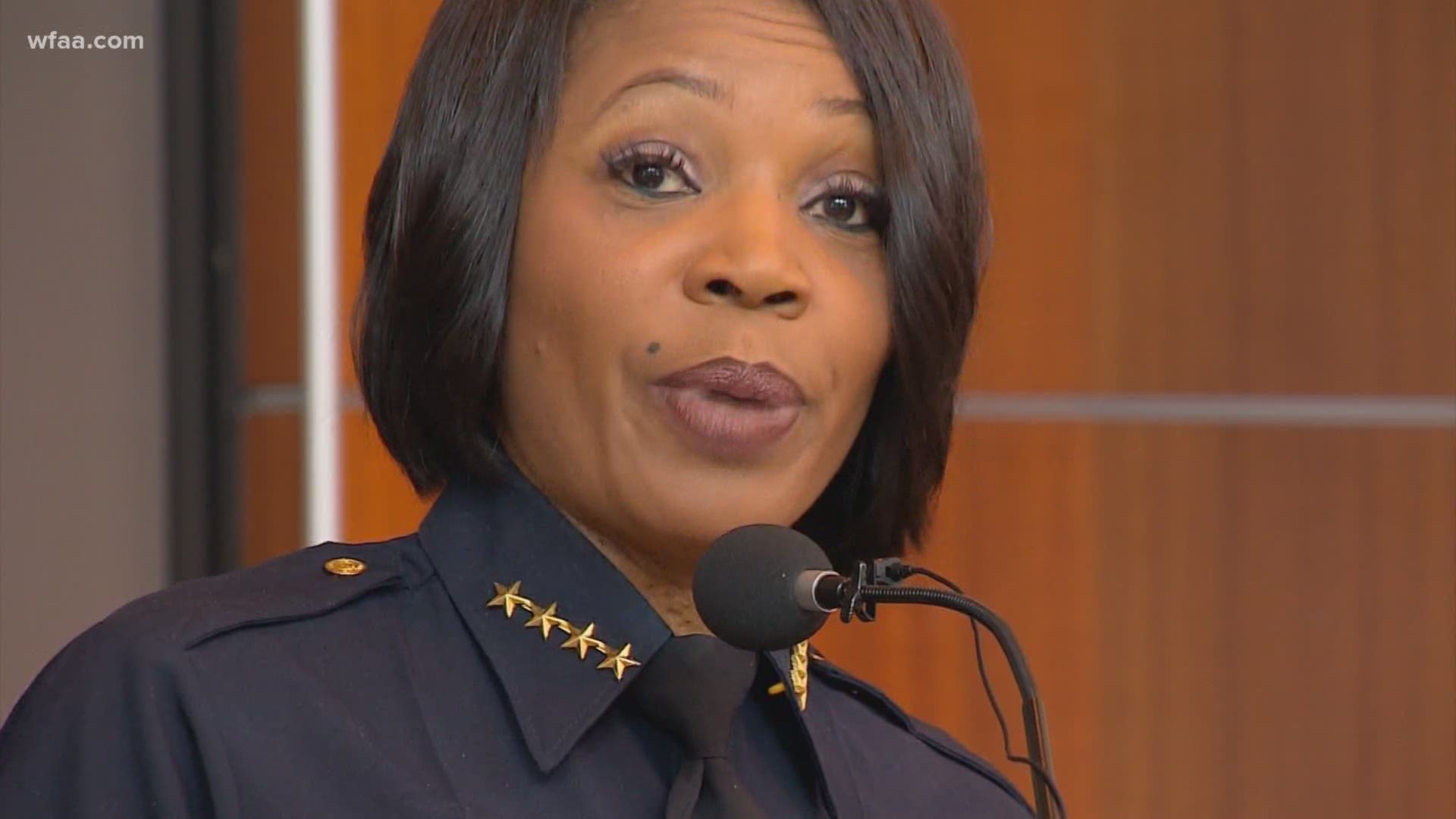 Why are there black squares in my social media feed?

From protest to policy, four black panelists talk about what's happening in their communities