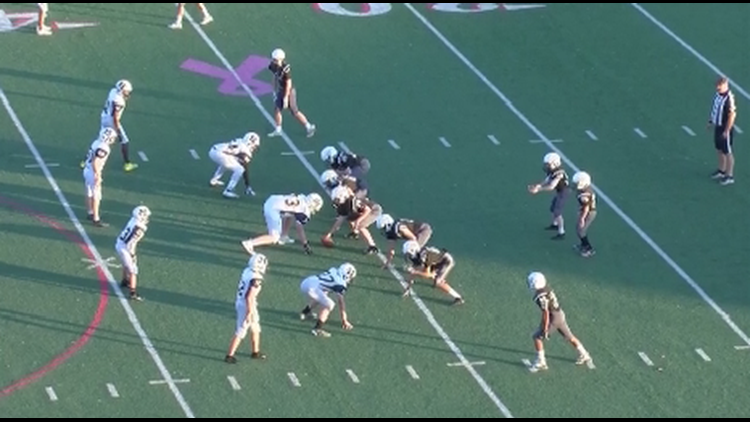 Photo by: WFAA
Drake Rigney and Zac Clay score touchdowns in their last games of the season.

Wheeling to a Touchdown: The plays two Grapevine-Colleyville 8th graders will never forget

COLLEYVILLE, Texas — Last night was the final game of the football season for two 8th grade teams, and two boys on opposing sides both came away winners.

Neither Drake Rigney nor Zak Clay had ever played in a football game, but both boys were able to score touchdowns in their first-ever plays.

Grapevine-Colleyville ISD shared the video of the plays online.

Drake Rigney, who is autistic, has been helping his team on the sidelines this year as a manager for the Cross Timbers Middle School Wolves.

For this game, he got to dress and play for the first time.

He ran 80 yards to complete a touchdown, and his entire team surrounded him to celebrate.

Drake told WFAA today that it wasn't hard to take the field.

"No. Because I knew I was always that fast," he said.

Also during the game, Zak Clay took the field for the Heritage Middle School Broncos. He's been attending every game this season and watching on the sidelines. Diagnosed with cerebral palsy, he uses a motorized wheelchair to get around school.

During his play, he put the pedal to the medal when he got the ball, going 85 yards to score his touchdown. His teammates were there to block for him every step of the way.

"I lined up beside the quarterback and he hiked the ball.  And I just ran!" Clay said.

Afterward, both boys got to celebrate with the cheerleaders and with their families, who were on hand for their big plays. Zak and Drake say they'll continue supporting their school teams when they get to high school next year.