From 8-figure sales to zero: COVID-19 is putting the hurt on one of Dallas' most beloved ticket brokers

Metro Tickets has been in Dallas since 1992, and has been a staple for sports fans along with music lovers when it comes to getting access to concerts and games. 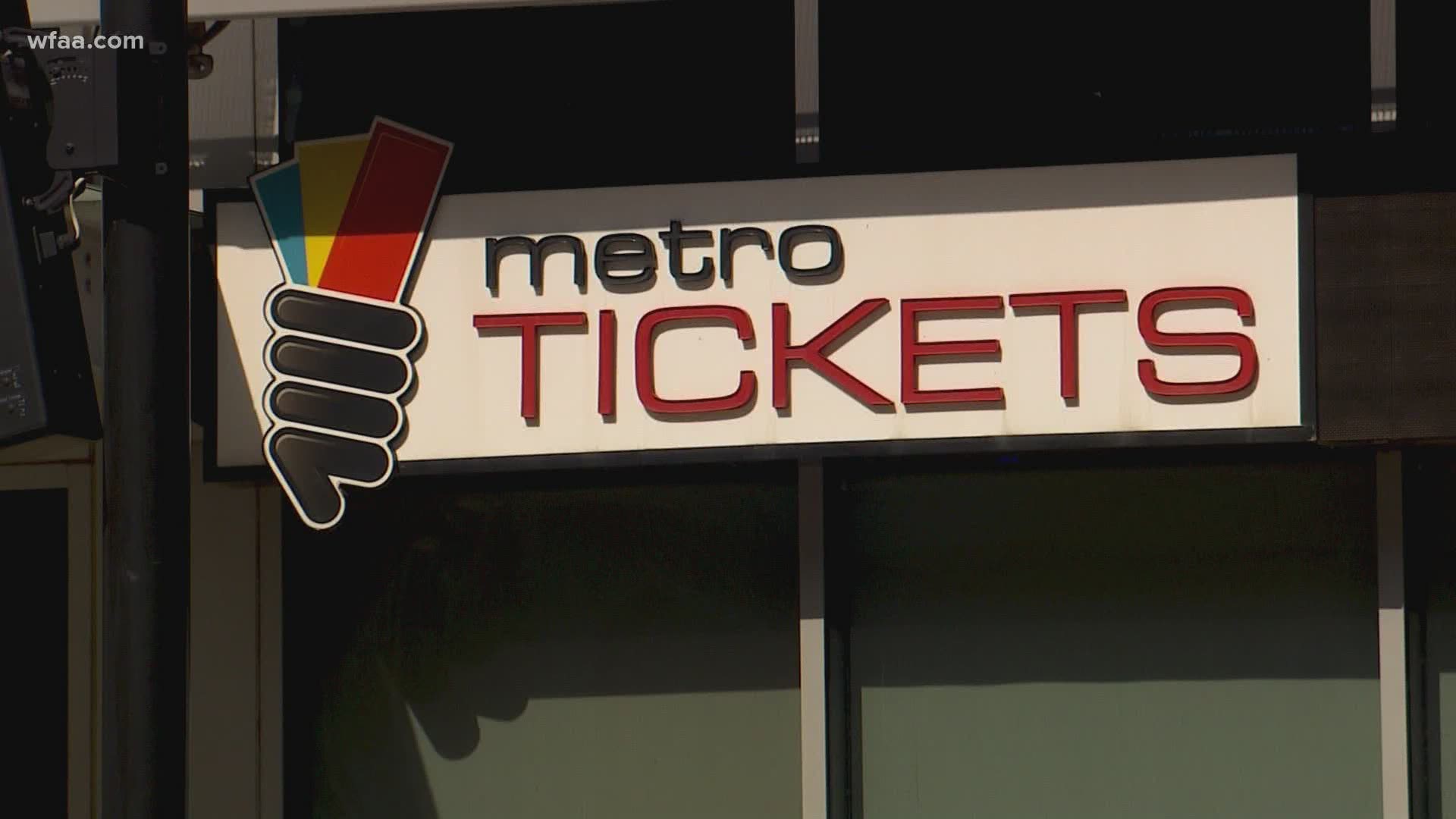 DALLAS, Texas — So many businesses in Texas have both pivoted and adapted to simply survive COVID-19 since its arrival in the Lone Star State.

But pivoting and adapting is an unknown luxury for the near 30-year standing business Metro Tickets, that music lovers and sports fans have turned to for years to snag admission to concerts and games.

Last year alone, the business did eight figures in sales.

But until football fans waltz back into stadiums in the coming weeks or a viable vaccine is produced on a large scale, owner Dave Christopherson said he is treading water.

Christopherson got into the business because he loved both music and sports, and adds that it's an ever-changing playing field.

He stood in Victory Plaza chuckling with WFAA about all the bands he's met, from U2 to AC/DC.

"The ticket business changes 100% every three years," Christopherson said. "You know, it used to be ads in the Dallas Morning News, and now people just go online. You used to be able to hold a ticket, and now it's just a QR code."

Despite the swiveling nature of the business, Christopherson admits that he didn't expect what came to pass in March: a nationwide stay-at-home order that canceled sports and mass gatherings.

No ticket sales mean no profits.

"We turned around and then just bam, we were shut down," Christopherson said. "Nobody knew what this virus was going to do. You know, what it was going to be. I didn't want to leave my house, I was worried about my family."

What followed was a massive string of refunds that Christopherson and his business had to facilitate.

"One of the hardest things that we had to do was refund people for Mavericks games and Stars games because both still had matchups left in the season," said Christopherson.

Christopherson said he went from selling every day to checking his credit card statements so he could keep track of refunds that he was owed and also owed to buyers.

"We got lucky actually," Christopherson said. "That time of the year we're actually building a lot of inventory and hadn't necessarily sold that much."

Metro Tickets was granted a PPP loan, which Christopherson said allowed the business to retain employees for a few months, but now a staff of 15 has dwindled to three.

"We got concerned about whether we were going to be around or not. I know guys like me around the country who aren't," he added.

Light at the end of the tunnel surfaced when the NBA, the MLB and the NHL announced they would return, but hopes were dashed when it was revealed that fans wouldn't be in attendance.

The biggest ace in the hole that Christopherson has left is football season.

Colleges across the state are planning to host a fraction of fans for now.

However, only three teams in the NFL have chosen to play in front of fans come week 1.

Those teams include the Miami Dolphins, the Kansas City Chiefs and the Dallas Cowboys.

Another six teams — the Cardinals, Panthers, Browns, Colts, Jaguars, and Buccaneers — hope to allow fans, however, their plans still need to be approved by local officials.

When it comes to the Cowboys, fans will be required to wear masks outside of eating or drinking and capacity has to be capped at 50%, meaning 40,000 fans could be allowed inside.

But will people go?

"We have this brand new dynamic of Cowboys football that's starting this year. New coach, new players, and people are interested," Christopherson said.

"I've had people tell me they're not going to die to go to a football game, and I've had another guy on the phone call and tell me to take his credit card immediately for a deposit."

Christopherson isn't encouraging people to go to the games, he knows what it could mean for someone if they get infected.

"I still have my concerns," he said. "I live my life, but the virus is always in the back of my mind. And I know that it's in the back of everybody's mind who is out there trying to live their lives."

But rest assured, the survival of Christopherson's business relies on a fan's choice to go to the game.

"It's not going to be your typical Cowboys game," Christopherson said. "But someway somehow, we're going to make it."