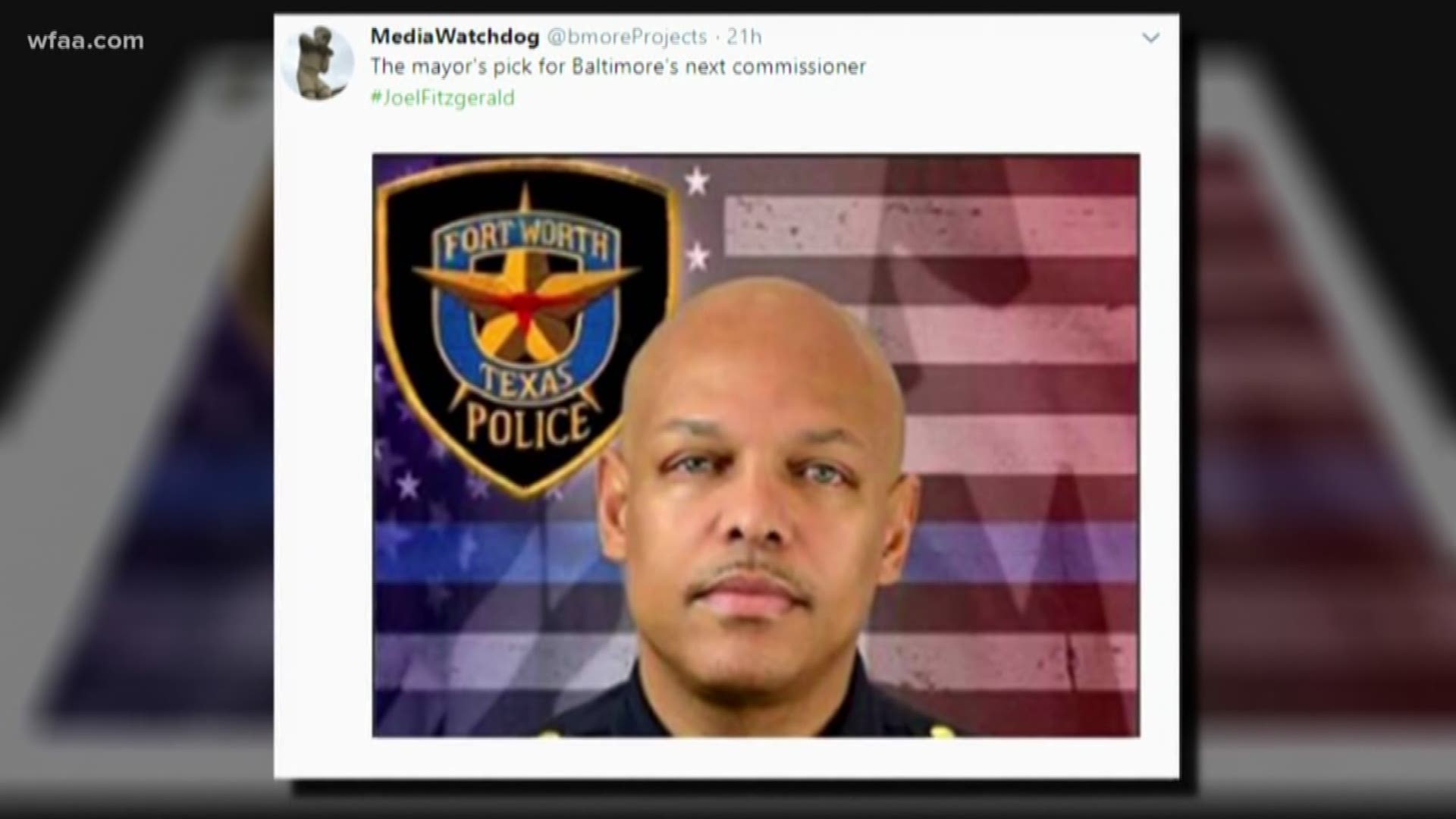 FORT WORTH, Texas — Multiple city and police sources have confirmed that Fort Worth Police Chief Joel Fitzgerald will likely leave the department in a bid to become Baltimore's next commissioner.

As of Friday, a timetable for a departure wasn't clear.

No official resignation has been submitted, and a Fort Worth police spokesman said the department hasn't been notified of any change in leadership.

But two sources told WFAA that Fitzgerald, who's originally from Pennsylvania, has been exploring other opportunities recently, including the position in Baltimore, Md.

Baltimore is looking for a new police commissioner, and the mayor of the city said she plans to make a decision by month's end, according to local media reports.

Fitzgerald was expected to meet with Fort Worth City Manager David Cooke at some point on Friday.

One department source said Fitzgerald was offered the Baltimore job, but had yet to officially accept.

A spokeswoman for Mayor Betsy Price's office said later in the day that the mayor and chief spoke briefly on the phone, and that he said he had applied for the job but "hadn't made a decision."

Sgt. Chris Britt, a department spokesman, said in an email that, "at this time, Chief Fitzgerald has not accepted any job offer."

The Fort Worth Police Association said Friday that it was closely monitoring the situation with the Baltimore Fraternal Order of Police.

The president of the union there, Lt. Gene Ryan, said that they're in the dark.

"As far as I know, our mayor hasn't made any decisions," Ryan said. "That's the worst part...the unknown. None of us know what's going on."

Ryan told WFAA that the mayor started her search for a new commissioner weeks ago, and that dozens of candidates were being considered.

He added that whoever gets the job, will be staring a violent and rising crime rate in the face.

"I just want the right person for the job," Ryan said. "They're going to have to be a strong leader, and take control of the department to put us back on track."

He was also in charge during the department's controversial handling of the arrest of Jacqueline Craig, which brought to the surface racial tension between police and the city's African American community.

Last year, however, nearly 84 percent of officers in the department said in a survey that morale had gone down since Fitzgerald arrived. Ryan added that morale was already low within the Baltimore Police department.

More information was expected to emerge next week.