"I'm just so in awe of the kindness and generosity of God's people," said Eric Staggs. "And the world needs more people that want to do nice things." 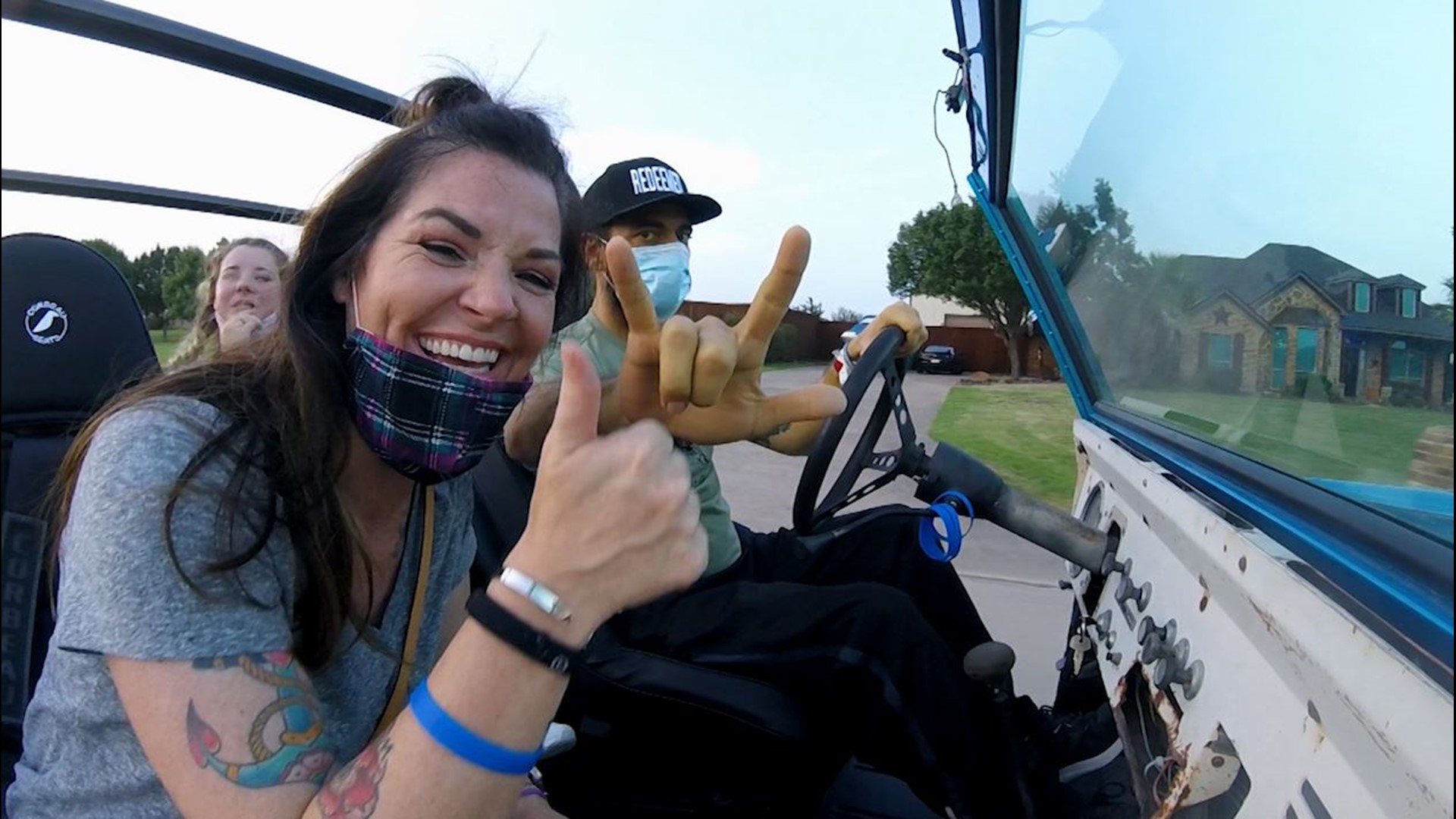 If friendship is a true measure of the richness of someone's life, Eric and Crystal Staggs are about as wealthy a couple as you will ever have the good fortune to meet — even though they are in the fight of their lives.

For a chance to interview them without all of us wearing a protective mask, we chose to talk by video conference call.

"I forgot I don't need these on the phone," Eric laughed as he removed the mask he was wearing in his own home in Forney.

He wears one not just because of the current pandemic threat, but because he is in the third year of a fight against cancer. Stage IV colon cancer has led to multiple surgeries, several rounds of chemotherapy, bouts of life-threatening jaundice, and most recently, a comment by his doctor encouraging him to pursue any and every available treatment option.

"Prayers are echoing through the heavens on our behalf," his wife Crystal said. "And that is the greatest gift we could ever receive."

RELATED: Here's what type of face mask you should be wearing, according to CDC

But when Eric and Crystal and their two children left home last month for a medical clinic in Mexico, their friends thought of one more gift. Eric had a long-unfinished project sitting, and rusting, in their driveway. He asked a friend if, while they were gone, the friend could install the new tires and wheels Eric had just bought for the vintage Ford Bronco that he'd only been able to drive a few dozen miles over the last several years.

"It's just been a constant reminder of something I've been meaning to do and not able to do," he said.

So that friend, a guy named Bo Durham, along with several neighbors and friends, secretly volunteered to do much more than just change the tires.

They called themselves "Team Bronco." Over the course of six frenetic days, they stripped the paint, re-tuned the engine, added new shocks to go along with the new tires and rims, repainted the Bronco cobalt blue, and put the Staggs family's favorite Bible passage — Psalm 91 — on the spare tire cover. And last Wednesday, on the day the Staggs were due to return home to Forney, they put the newly-restored Bronco back in the driveway where they'd "stolen" it the week before.

"It turned out being a real labor of love," said Durham. "Man, if it just gives them two minutes of joy looking out the window and saying, 'Man that's awesome.' If they get to run around town with the top off for 30 minutes and they forget about the fight that they've got going, that's why," he said of their motivation. "Just to bring 30 minutes of happiness here and there. That's all we did it for."

Dozens in matching blue Team Bronco t-shirts greeted the Staggs when they returned home just before sunset. Everyone wore masks to protect Eric and to protect each other.

"This is such a blessing for them to have the friends that they have that are so generous, so loving," said Crystal's mom Debbie Lindsey.

"Holy crap," Eric exclaimed as he finally realized the Bronco in the driveway was actually his.

"Bo, dad-gum it, dude," he said to his friend after he climbed into the driver seat.

"Dude, I can't get over it. I don't know what to say. Thank you guys so much. Man, this is awesome!"

"I pulled up around the corner and said 'Dad-gum it, they got everybody over here to welcome me home,' and I was so excited." Eric said as he began to cry. "I was just so excited to see everybody. This is over the top, man, this is awesome. This is the coolest thing ever!"

But the coolest thing ever needed its first official test drive. And with the roar of a finely-tuned engine he hadn't heard in years, Eric took the Bronco for a brief spin through the neighborhood, his wife riding shotgun, their kids in the back seat.

And those few minutes of happiness that his friends wanted to offer is exactly what this family found.

"And I am just so grateful that we have people like that around us that are willing to step in and help with whatever they can," Crystal said.

"I'm just so in awe of the kindness and generosity of God's people," Eric added. "Guys that I've never met before felt like it was a nice thing to do. And the world needs more people that want to do nice things."

Eric almost always wears the same baseball hat. In big bold letters, it says "REDEEMED." A family of deep faith, he says it reminds them that they are never really alone.

"Mostly I want to tell people whatever you're going through, you're not going through it by yourself," he said.

A bright blue Bronco, back on the road in Forney with a smiling family onboard, serves to remind us all of that now too.

The Staggs still have a mountain of medical bills and additional cancer treatments on the road ahead. If you would like to help, you can find out more here.