Prosecutors rested their case Monday against Ruel Hamilton, who faces up to 30 years in prison if convicted. 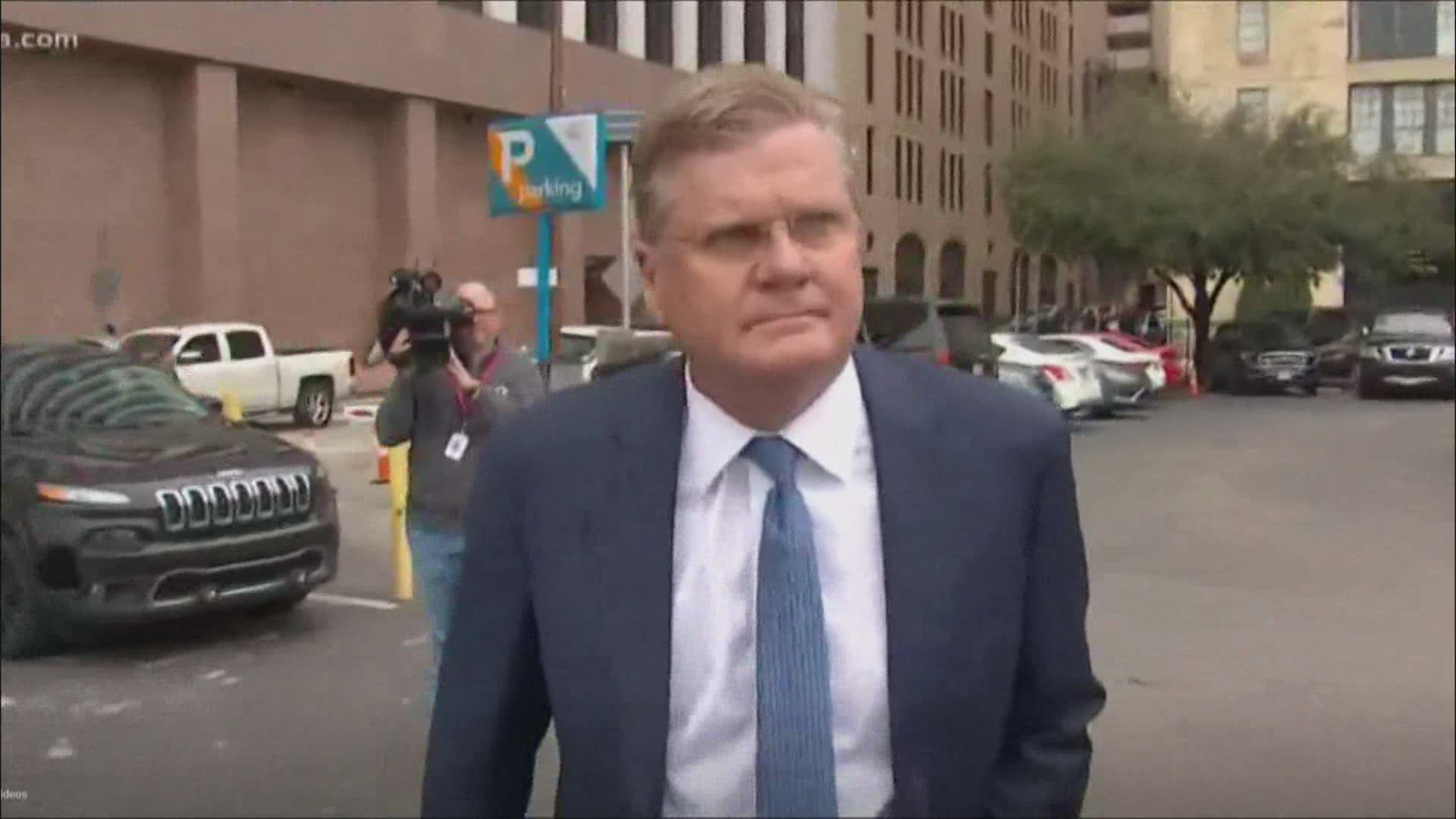 DALLAS — Prosecutors rested their case Monday against developer Ruel Hamilton, who is accused of paying two former city council members thousands of dollars in bribes so that they would back him politically and advocate for his affordable housing projects in southern Dallas.

Developer Ruel Hamilton is accused of paying off former council members Dwaine Caraway and Carolyn Davis in exchange for their political support. If convicted, Hamilton faces up to 30 years in prison.

The government’s last witness was Mike Rawlings, who was mayor of Dallas from 2011 to 2019.

Prosecutors asked him about efforts to get a paid sick leave requirement for businesses on the ballot in 2019. Rawlings said while he did, and does, favor employees getting paid sick leave, he opposed putting the measure on the ballot because he knew the city couldn’t legally enforce it.

Rawlings testified that backers only wanted it on the ballot to booster voter turnout.

“It was being used as a political ploy and not a genuine effort to make this happen” Rawlings testified.

The city council ended up passing the ordinance, but a federal judge blocked it.

Prosecutors have said that Hamilton paid then-council member Dwaine Caraway $7,000 to help get the matter on the ballot to help Democratic candidates. Hamilton’s attorney Abbe Lowell has argued that the $7,000 personal check his client wrote was no bribe, but money for Caraway’s ailing mother’s medical bills.

Prosecutors wrapped up their case Monday afternoon after five days of testimony. Lowell called his first witness Monday afternoon – a former business partner of Hamilton, who told jurors the defendant has a hard time not helping people who ask for it.

Caraway, who is serving prison time for taking $450,000 in bribes in another case involving Dallas County schools, testified for the government last week against Hamilton.

Davis pleaded guilty to taking $40,000 in bribes from Hamilton, but died in a car crash in 2019. Jurors heard from her last week on 2015 wiretap recordings boasting about taking cash from Hamilton. In exchange, she advocated for city approval of his low-income tax credit apartment projects. She also used some of that cash to give to other council candidates’ campaigns to benefit Hamilton.

RELATED: Former Dallas council member Carolyn Davis boasted about how she wouldn't be caught taking bribes. Turns out, the FBI was listening.

Testimony in the trial has also revealed that both Davis and Caraway met multiple times separately with two undercover FBI agents posing as developers. The undercover agents wined and dined both council members, taking them – including Davis – to strip clubs and high-end steak houses.

Caraway himself received about $44,000 from the undercover FBI “developers” when he was running for council in 2017 and after he was elected. In exchange, the undercovers sought pledges from Davis and Caraway that they would help get their fictitious projects approved.

Neither Caraway nor Davis was ever charged for their dealings with the two undercover agents, but prosecutors used those dealings to pressure the council members to cooperate in the case against Hamilton.

Testimony last week revealed that Davis had no income other than her council pay, and payments from Ruel Hamilton.

Rawlings, the former CEO of Pizza Hut who is now a partner in a private equity firm, testified why he favored raising city council pay from $37,500 to $60,000, which voters approved in 2014.

“Being a good city council person is a full-time job,” Rawlings testified. “It’s bad for people that have a vote that can sway the city … to live at a poverty level.”

“Billions of dollars are voted on,” Rawlings added.

Griggs, who was vice chair of the city’s housing committee, also described how competitive the process was for developers to win approval for lucrative state tax credits. In 2015, Hamilton was competing for tax credits for his Royal Crest apartment project. If the city, and later the state, had approved the project, Hamilton would get a $2.7 million developer fee, which prosecutors say was an incentive for him to pay bribes to get his project approved.

Griggs testified that at the Feb. 2, 2015, Dallas housing committee meeting where Hamilton’s projects were up for approval, Davis – chairwoman of the committee – asked him to chair the meeting instead. He said she didn’t say why.

On wiretaps recorded in 2015, Davis was heard boasting to a friend that, as long as she recused herself from meetings where Hamilton’s projects were considered, she was not breaking the law.

Prosecutor Tiffany Eggers, on cross examination, asked Griggs whether Davis told him she was communicating with, and taking money from, Hamilton relating to the apartment project item on the agenda. No, Griggs testified.

Griggs also testified about campaign contributions he received from Hamilton in September 2016. Griggs said when it was brought to his attention, years later, that he had gotten six $1,000 checks from Hamilton – the limit is $1,000 – he returned the money.

Testimony continues Tuesday in the case.