Michael Tinley lived in Dallas but died in the Sept. 11, 2001 attack on the World Trade Center. 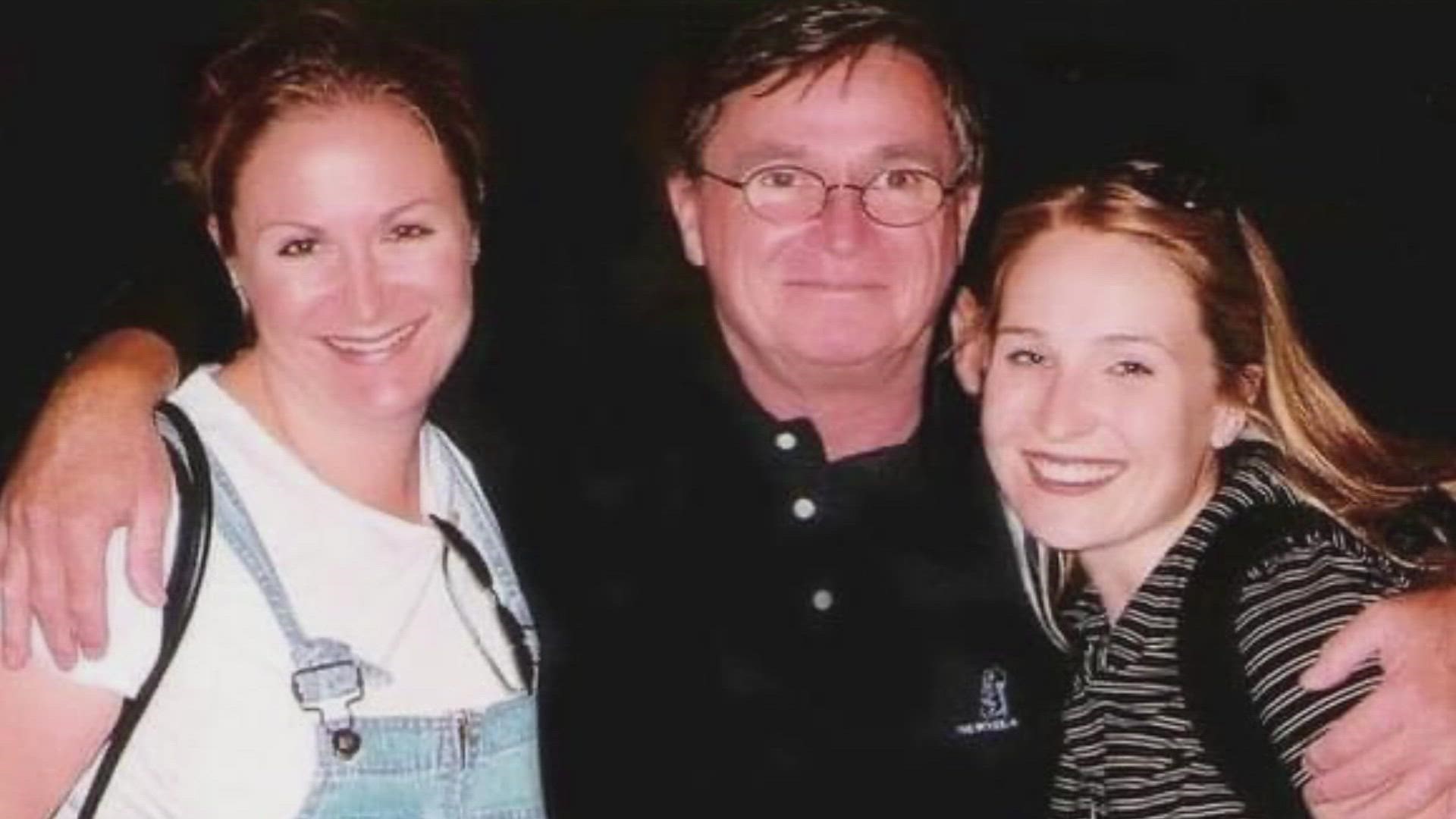 DALLAS — Time is a curious thing. It is a precise measurement that tells an exact truth.

“My oldest was born a year to the day after we last saw my dad,” Lisa said, pausing to wipe a tear.

“Time obviously has not stood still. I mean [my daughter] is 19 years old. But we miss him as much as we did 20 years ago.”

On Sept. 3, 2001, Jenna and Lisa said goodbye to their father after the trio enjoyed Labor Day weekend in New York City, one of Mike’s favorite places.

Credit: Tinley Family
Jenna and her father in FAO Schwarz on their final weekend together.

Tinley, 56, had raised his daughters in California but moved to Dallas in 1999.

While Texas was home base, he frequently traveled for work and pleasure.

On Sept. 11, he was at a meeting in his firm’s New York office, in tower one of the World Trade Center.

He called his sister, Suzanne Tinley, before his meeting began.

Suzanne lived in New York's Tribeca neighborhood and her brother told her he was waving at her from the 100th floor of the World Trade Center.

“One of the most profound things Mike said to me that morning was that he was a road warrior and he didn’t have to be in any one place. Lisa had just gotten married and Jenna was getting married and he was going to tell his boss that day that he wanted to move back to California to be closer to them," Suzanne said.

On the official list of victims killed in New York City that day, Tinley’s is the only name that lists a North Texas hometown.

About a week before the 20th anniversary of the attacks, Jenna, Lisa, Suzanne, and Jeannie Tinley Gilmore – another sibling of Mike’s – came together for a virtual family reunion to talk about two decades of grief.

They remembered Mike as a man who loved photography and theater and travel.

He loved to sing.

He loved to cook.

“He really enjoyed wherever he was at any given moment,” Suzanne said.

Jenna said her father was always up for an adventure.

Credit: Tinley Family
Tinley's daughter described him as "light hearted and always up for an adventure."

They enjoy celebrating the life Mike loved to live, but they also mourn how much life he missed.

Jeanne, Suzanne, and their brother, Emmett Tinley, are the only survivors of eight siblings.

Lisa was 29 and newly married with no children when her father died.

She is now a mother of three teenagers.

Jenna was 25 and engaged at the time of her father’s death, but she delayed her wedding for a few months.

When she did get married in late 2002, she carried a picture of her father in her bouquet.

“I know my dad walked me down that aisle because I felt him 100% and was able to somehow walk down without a tear,” she said. “That was totally because he was with me.”

Jenna and her husband, Chad, had two boys.

But about a decade after losing her father, Jenna lost Chad to cancer.

“That was a time for sure when I missed my dad,” she said. “He was a sounding board for us and always had some sort of wisdom.”

Michael Tinley didn’t get to see his daughters become mothers, but Jenna and Lisa see reflections of him in the grandchildren he never met.

They also feel his presence in ways they never dreamed.

Credit: Tinley Family
Lisa and Jenna on the fifth anniversary of the attack on the World Trade Center.

During one of Lisa’s pregnancies, she had a strong craving for peanut butter.

She swears she heard her father’s voice saying, “Yuck!” as she stood in her kitchen eating it straight from a jar.

The most poignant presence they’ve felt was on the fifth anniversary of the attacks.

That night, they went down in the dark pit where tower one had stood.

They expected to be overwhelmed with anger or grief but instead, felt a strange sense of peace.

Photos they took that night show thousands of flecks of light, which they couldn’t see with their naked eyes.

“We just felt like our hearts were opening up and there were angels around us,” Lisa said. “It was a big part of our healing process.”

Jeannie says she thinks Mike’s death taught her to “grab hold of all the moments you can.”

“I like to think that I don’t wait to do things because you don’t know how much time you have,” she said.

Suzanne believes her brother’s death taught her there are few things she can’t handle.

Credit: Tinley Family
Lisa and Jenna with the grandchildren their father never knew.

“I don’t think Mike would want any of us to sit around and feel bad," she said. "I think he would want us to appreciate that he brought us together to really celebrate his life," Suzanne said.

It feels like 20 lifetimes since they’ve seen him, but 20 minutes since the tragic way they lost him.

The years have taught them two important lessons about time: it doesn’t ever stop and it doesn’t really heal.