'This was a devastating event,' CEO says in ERCOT board meeting after millions lost electricity last week 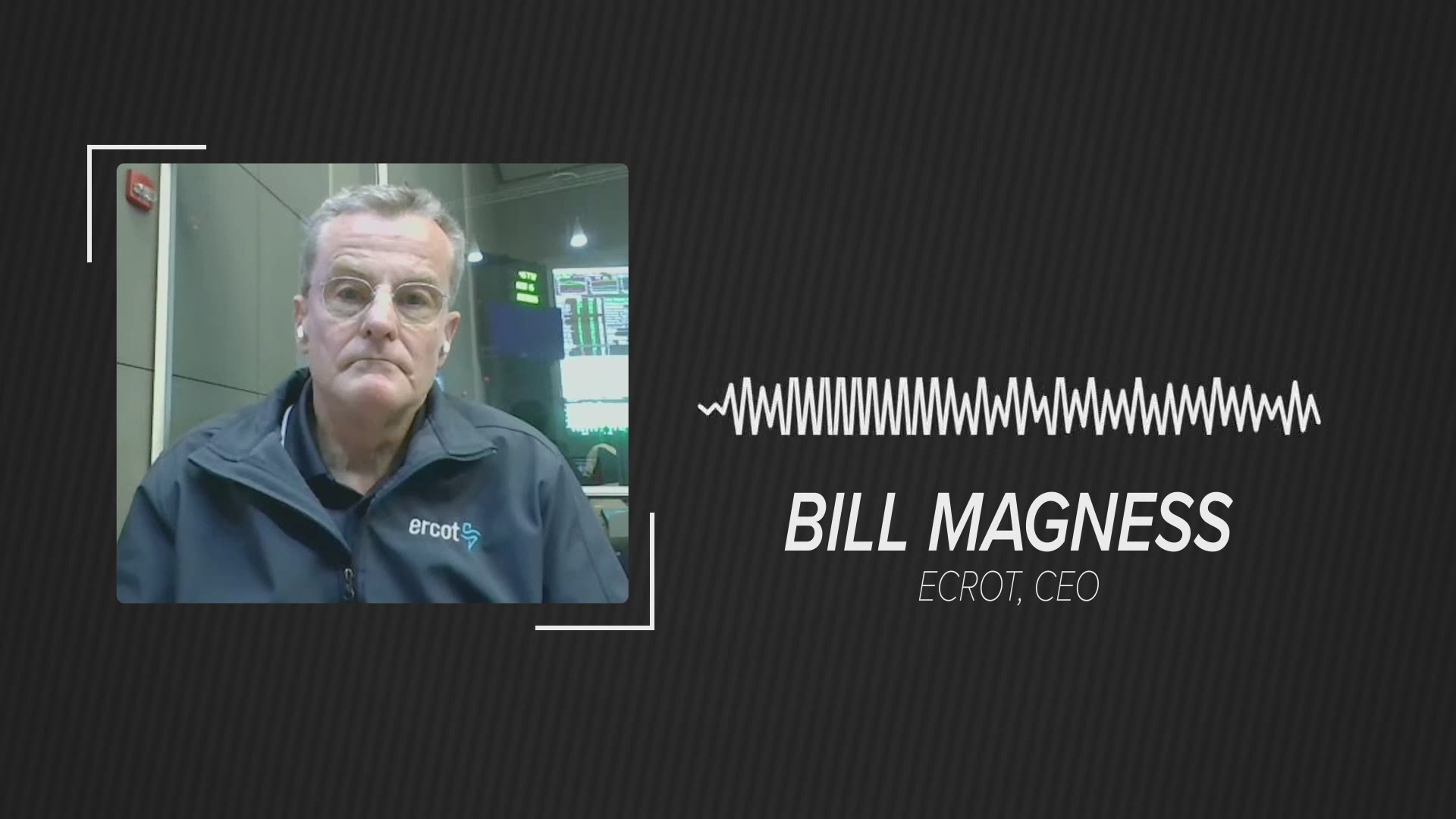 In an urgent board of directors meeting Wednesday, the Electric Reliability Council of Texas addressed last week's extreme winter weather that left millions without electricity.

“This was a devastating event," CEO Bill Magness said in his opening statements. "Power is essential to civilization."

ERCOT officials said controlled outages were implemented to prevent a statewide blackout, saying the storm was unlike anything Texas has experienced before.

Magness said Texas was 4 minutes and 37 seconds from a black-out event. If it had happened, it would have taken weeks, if not months, to get back fully online.

"The human toll is dramatic. Imagine that, multiplied by weeks and potentially months, had the entire grid gone down," said State Rep. Rafael Anchia. "We would have been looking at a widespread humanitarian crisis that would have cost a lot of people their lives, and really set this state back a long time."

The Texas Railroad Commission, which regulates pipelines and wellhead operations, has said that it does not require the state’s natural gas producers to winterize, nor does it require producers to report when they have to go offline because of winterization issues.

“In other states like North Dakota, where they experienced this type of cold, they're able to get gas out of the ground and to generation plants. That didn't happen here in Texas,” said Anchia, who is a member of the House Energy Resources Committee. “So we're going to be asking the Railroad Commission for answers on why they have not ordered weatherization.”

ERCOT said it has 13 units that it has contracted with in case of a black-out event, but six of those experienced outages last week, officials said Wednesday.

During the meeting, ERCOT did share some of the steps it took to prepare for the winter storms. These included the cancellation of transmission maintenance outages and waving COVID-19 restrictions to bring in additional support staff.

An order from the Department of Energy allowed power generators to ignore certain environmental standards, which was helpful, officials said.

ERCOT said on Feb. 3, the agency's meteorologist warned them that the coldest weather of the year was approaching.

The week before the winter storms, ERCOT said it took the following communication steps ahead of the anticipated weather:

According to a slide show presented by ERCOT, it took about 17 hours from when the agency issued a conversation alert at 8:30 a.m. on Sunday, Feb. 14 to escalating to Emergency Operations Level 3 at 1:20 a.m. on Feb. 15.

ERCOT did not return to normal operations until 10:35 a.m. Friday. Magness said the load shed was to prevent blackouts, which he said was the direction the state was going Monday.

ERCOT said at its highest point about 48.6% of the generation was forced out due to the impacts of various extreme weather conditions.

"That's an extraordinarily large number to try to manage," he said.

ERCOT said icy roads, leaks, zero-degree temps, and other weather conditions impacted their efforts to get electricity back on.

"We couldn't eliminate outages until we saw significant generation and load back in balance," he said.

48.6 of generation was out at the highpoint of last week's winter storm. #ERCOT pic.twitter.com/OMUiymei3i

A chart released by ERCOT shows a peak of natural gas being out on Monday, Feb. 15.

"The storm affected every generation type," Magness said. "This affected the system across the board due to the weather we saw."

Anchia also addressed the issue of the natural gas that froze during an interview with WFAA.

"We went into this thinking that the balanced energy portfolio that Texas brags about regularly, was going to perform and in the end, it did not," he said.

During the meeting, Magness said, "going forward ERCOT wants to provide explanations, not excuses." This includes generation weatherization, according to the CEO.

ERCOT also shared a graph showing the last time rolling outages occurred in February 2011. It shows D-FW experiencing a low of -2 degrees during last week's winter storms versus 13 degrees in the 2011 event.

But Anchia urged outages shouldn't have happened. He urged there needs to be reform with ERCOT and the Public Utility Commission, stating that there have been "massive failures basically every step of the way."

"We asked them to take dramatic measures after the 2011 freeze so that that never happened again, and we find ourselves in 2021 with the same challenge, and it's really clear to me that the PC did not do its job," he said.

When asked about Texas not being connected to the national power grid, Anchia compared it to an island without help.

"We're essentially an energy island with no connection to the mainland. And if our electric grid had gone down, there was no way to get help from others," he said.

Anchia stressed that last week's power outages were worse than the rollouts in 2011.

"We found ourselves even after telling them in 2011. 'Look, we never want to be in a situation where we have rolling blackouts where people are freezing in their homes.' And yeah, it happened again in 2021 and at a much larger scale."

Anchia said responsibility starts at the top. Texas lawmakers are set to begin hearings about the outages Thursday at the state Capitol.

5 ERCOT board members who live out of state to resign

Just one ago day, ERCOT announced in a notice to the Public Utility Commission of Texas that four of its board members will resign effective Wednesday.

A fifth board member separately submitted her resignation. Gov. Greg Abbott sent out a statement saying he welcomed the resignations.

"The State of Texas will continue to investigate ERCOT and uncover the full picture of what went wrong, and we will ensure that the disastrous events of last week are never repeated," Abbott's statement read in part.

According to the filing, here's who will resign Wednesday:

Gov. Abbott is scheduled to give a statewide address at 6 p.m. Wednesday last week's winter storm and the power outages it caused.

RELATED: 5 ERCOT board members who live out of state to resign following board meeting Wednesday