40 seasons and 4 state titles: Ennis assistant who's never coached for another team is a rareness in Texas high school football

In 1982, Paul Willingham started coaching for the Ennis Independent School District at the young age of 22. He's stayed put ever since. 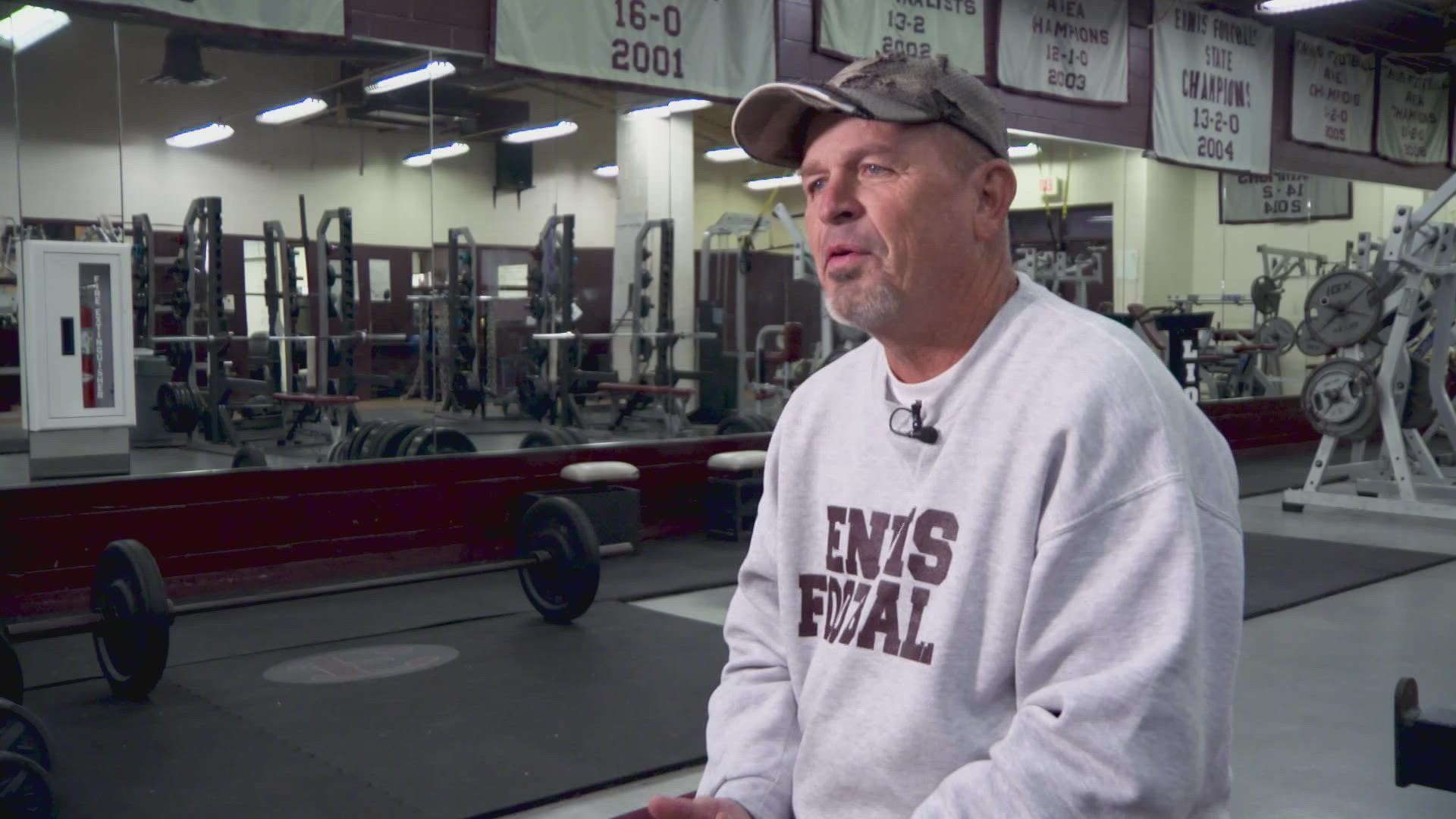 That's the easiest way to describe the hat Paul Willingham has been wearing daily since 1999. The 61-year-old assistant coach for the Ennis Lions smiles anytime someone brings it up.

Coaches are usually superstitious about what they wear -- a lucky pair of socks, maybe a jacket or undershirt.

But Willingham? He's just a man of principle.

"I've just always picked this hat, and it's my hat," Willingham said with a laugh.

"I'm always going to have it, and I don't think a man should just keep changing hats."

Through that response alone, you can tell that Willingham is a loyal guy.

And the word loyal might sum up his entire coaching career with Ennis.

Willingham has coached for the Lions since the staggering age of 22.

He moved to Ennis in the seventh grade, played for the team in high school, graduated, then went to college, and came back home looking for a job.

But at the time, it wasn't to be a coach.

"I had graduated from Tarleton State University, and I wanted to be the agriculture teacher here but got denied," Willingham said. "I was kind of dejected, so I started to get into construction. They called me back, though, and asked if I wanted to coach junior high football, and I said I'd like to give it a shot."

"I had no idea I was going to be a football coach in 1982," Willingham laughed.

He's primarily served as the team's defensive coordinator during those decades.

Ask any other high school football coach in Texas, and they'll all tell you that kind of accomplishment is nearly impossible or desired these days.

Most coaches, especially assistants, move from place to place, building a reputation and a resume for a head coaching gig.

There's no doubt that if Willingham wanted to leave and be a head coach elsewhere, he'd be hired in a second.

But that word loyalty and sticking to what he knew remains the reason why Willingham has stayed put.

"When I first started, I didn't know you were supposed to advance by going to another town. I knew that Ennis was my home, and that's all I knew," Willingham said.

Since 1982, Willingham says he has served with four head coaches.

The most notable is Sam Harrell, who arrived in Ennis in 1994. His explosive use of the spread offense paired with Willingham's defensive mind is a big reason why Ennis was a powerhouse from 1999 to 2005.

Harrell, however, left the team as head coach to battle multiple sclerosis, and Jack Alvarez took over in 2011. Willingham won a state title with Alvarez in 2014.

Harrell has since come back, overcoming MS, and has led the team since 2018.

He returned happily to find an immovable pillar in the Ennis fieldhouse, Paul Willingham.

Willingham chose to stay after Harrell left because he believed in continuity and that it leads to success.

Coach Steve Marrow also chose to stay, who has been with the team since 1994 as an assistant coaching the secondary.

"If you get that continuity, coaches will start to gel, and the team just starts to gel," Willingham said.

"The years we've had coaches stay in one place, that's when we've had some good years."

When you spend 40 years in one spot, people around town certainly get to know you on Friday nights. That is no different for Willingham.

Credit: Willingham Family
Willingham poses with his daughter Kelsey in 2014 after winning a state title.

Two of his sons, Jake and Chase, have both coached with their father in Ennis, too.

And Willingham treats a lot of his players like they're his kids. On the field, he is animated, passionate, yet a motivator.

Another reason he can't leave his hometown? He says Ennis kids play football better than anybody.

Willingham's son Chase, who is now a coach for the Lions, always laughs when his dad says that.

"I don't know how he knows that because he's never been anywhere else," Chase said. "How does he know? But I've coached in other places, and I think he's right."

To be fair, both Chase and Paul are sons of Ennis and might be a little biased.

But Willingham stood by his remarks.

"Our kids are gritty. They see the banners on the wall, and they want to be like the guys that played before them. They're tough," Willingham said.

And it would also be fair to say if you've lived in Ennis, that many present and past players got that grit from Willingham. Many of them to this day see him in town and thank him for all lessons learned.

"Kids come back, and they say something to me that I told them that stuck with them, and it brings a lot of joy to my heart," Willingham said.

Chase gets to hear about his dad from former players, too.

"I think all kids kind of think their dad is kind of a superhero of sorts, but I always got to hear it from other people," he said. "That's special."

Ennis plays Mansfield Timberview in the second round of the 5A Div. II playoffs Friday night in Waxahachie.

The outcome is not known yet. But one thing inside the Ennis fieldhouse remains certain: Willingham isn't going anywhere.

"I love this community. It's where I'm going to be," Willingham said.

Credit: Willingham Family
Willingham poses with some of the hardware he's helped acquire over the years.