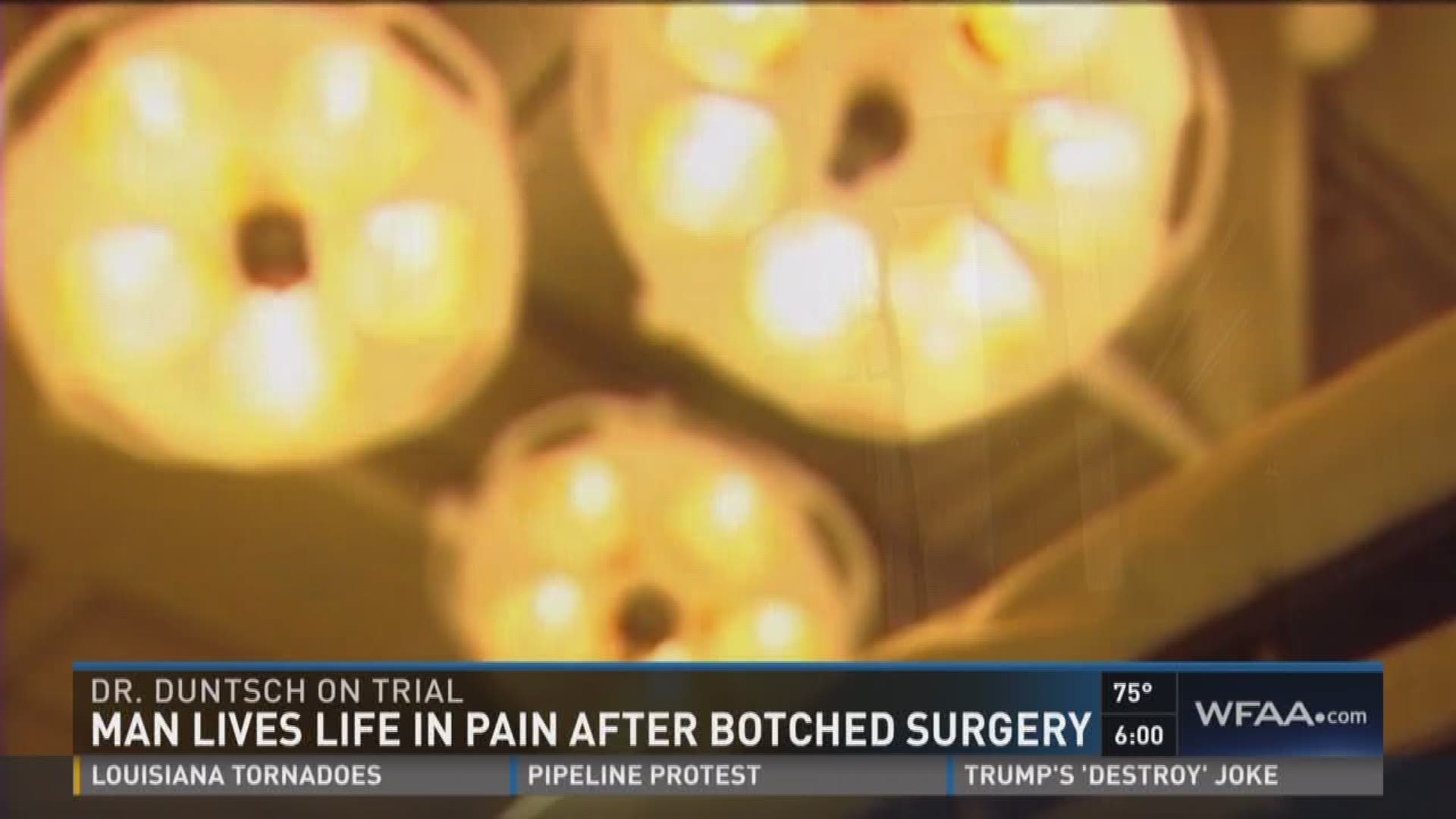 Ken and Glenda Fennell have been coming to court daily hoping to see justice done.

Ken – a man with a snow white beard who looks a lot like Old Saint Nick can only walk short distances. The pain's too much. But he's enduring the pain to be there for the trial of Dr. Christopher Duntsch, the former neurosurgeon he blames for all that pain.

Prosecutors are trying Duntsch in the case of another botched surgery involving Mary Efurd, who is now confined to a wheelchair.

“We just want to make sure that he can't do it to anybody else,” Ken Fennell says.

Baylor decided to drug test after a patient named Jerry Summers told an ICU nurse that he had used cocaine with Duntsch the night before the surgery. Summers, a friend and former employee of Duntsch, was left a quadriplegic after complications from a February 2012 surgery performed by Duntsch.

In a video deposition played in court Monday, Summers said that he had made up the allegations of drug use because he wanted the nurses to get Duntsch to come to his room after he woke up from the surgery in horrible pain and unable to move.

Angelina Fusco, an ICU nurse, testified that Summers told her he had used cocaine with his girlfriend and Duntsch the night before the surgery. She recorded in her patient notes that she heard Summers tell Duntsch’s assistant that he would “blow it all up. You know I’m talking about, what’s going on.”

She said also recorded in her notes that she heard Duntsch telling Summers that he was going to get him into trouble and that if he didn’t stop saying things he would have to fire him as a patient.

Fennell was having back troubles when he went to Duntsch in 2011. Duntsch was new to Dallas, having moved here from his native Memphis.

“He had this arrogance to him that I'm the greatest. I can do it,” Ken says. “He was telling you what a great surgeon he was and that nobody else in Dallas knew what they were doing and he was going to take over Dallas.”

Duntsch bragged that the Dallas Mavericks were going to hire him as a team doctor. He also bragged that he was going to be the head of neurosurgery at Baylor Medical Center at Plano.

The Fennells believed Duntsch could fix Ken’s back problems.

“He said that it went great, that it worked,” Ken recalls.

The Fennells say they later found out that Duntsch had operated on the wrong part of his back. When the pain became too much again, he returned to Duntsch. Duntsch said he needed a second surgery.

By then, Duntsch was no longer a doctor at Baylor Plano. They thought it was odd that he was no longer practicing there. They had a friend who was in the insurance industry check to see if she could find anything. The friend found nothing.

What they didn’t know by time of that second surgery in January 2013 was that there had been a string of botched surgeries and the deaths of Floella Brown and Kellie Martin at Baylor Plano and Dallas Medical Center.

“If we had known all this was going on, I definitely would not have let him operate on me again,” Ken says. “I came out of that second surgery and I was paralyzed from my waist down and felt like there was a bonfire burning on me, on my legs.”

Duntsch told him he was going to send him to rehab. He said Duntsch never checked in to see how he was doing afterward.

They would later learn Duntsch had taken a chunk out of Ken's femoral nerve. He spent months in rehab just to even get to the point where he could even walk with a cane.

“It changed everything,” his wife says, wiping away a tear. “It’s drastically changed our lives and nobody should have ever to go through this. Nobody.”

His leg is in constant pain. It feels like there’s a tight tourniquet on it. He can only walk about 30 feet or stand for a few minutes before he has to sit down.

The Fennells last fault hospitals for failing to report him. They fault a Texas Medical Board too slow to act.
“They've got physicians sending letters and personally calling people the medical board saying y’all have to stop this person,” Ken said. “He is doing tremendous damage to people. He’s harming people.”

The medical board suspended Duntsch’s license in June 2013. It was revoked in late 2013. But it was too late for Ken Fennell.

“It makes me think why is that not all made public to where people knew about this,” said Glenda Fennell, also 73.
By state law, complaints are not a matter of public record until a doctor is disciplined. The Fennells believe that has to change.

Ken says he can understand not wanting to destroy a doctor’s livelihood but on the other hand, “the public has to be protected, too.”

In court, the hardest thing for the Fennells is listening to the stories of all those hurt.

“I've had the same surgery that Kellie Martin had ... and I'm sitting here and she's not,” she said. “Where is the rhyme or reason? I just don't understand why she's not here.”

Martin, a school teacher, died at Baylor Medical Center at Plano in March 2012.

The Golden Years, they'd imagined are lost. Ken still plays Santa at Christmas even with all the pain. It gives him joy. The successful commercial window business he’d built he had to close because he could no longer physically do it.

He has a few choice words for Duntsch.

“I would like to say I hope you have some regret of what you've done and the harm that you've caused people because he caused lots and lots of heartache and hardship,” Ken says. “I think it’s just because he was egotistical and I think he believed that he was that good.”