Dr. Duntsch defense expert: "The only way this happens is the entire system fails the patients" 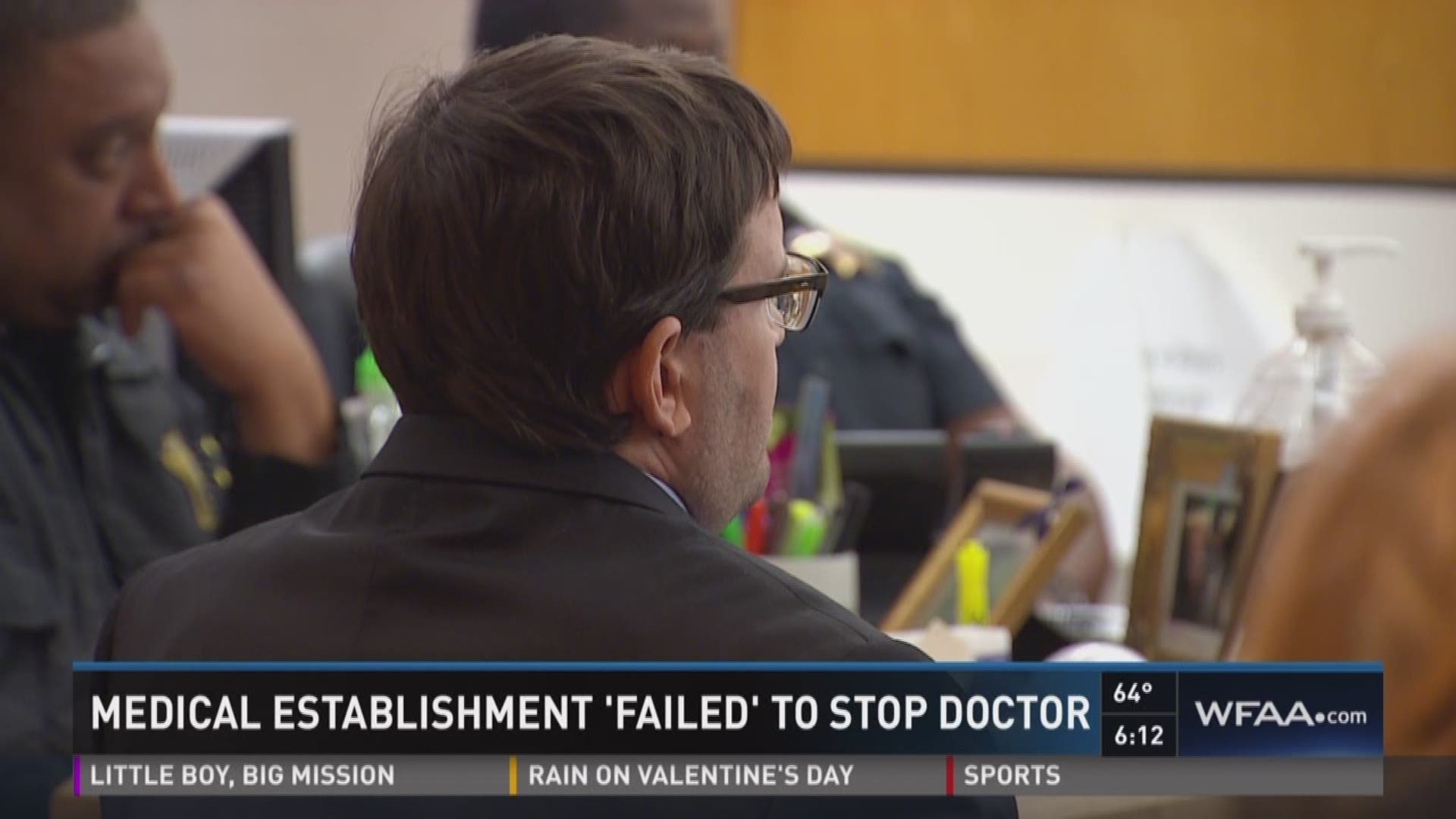 Christopher Duntsch is the face of the failure of the medical establishment to police its own.

“One individual can’t do it alone,” testified Dr. Carlos Bagley, director of the neurological surgery spine program at UT Southwestern Medical Center. “The only way this happens is that the entire system fails the patients. .. All the checks and balances go out the window.”

Bagley took the stand as the sole expert witness for the defense, who sought to portray Duntsch as a poorly trained, inexperienced surgeon who should never have been allowed to make his way into a North Texas operating room. If he’s convicted of botching the July 2012 surgery of Mary Efurd, Duntsch could spent the rest of his life in prison.

The question is can prosecutors prove that Duntsch’s string of horrifically botched surgeries is more than mere malpractice and rises to the level of a criminal offense?

For eight days, jurors have heard account after account of the surgeries botched by Duntsch over about 18 months. They have heard how his former friend claimed right after a botched surgery that he had done drugs with Duntsch the night before. They have heard how he turned in tap water after he was asked to do a drug test. They have seen the contents of a long dystopian email in which Duntsch described himself as something “between God, Einstein and the antichrist” and a “mother (expletive) stone cold killer.”

Duntsch came to Dallas in late 2010. Those that know him describe him as supremely confident in his abilities. He had just graduated from the University of Tennessee Health Science Center’s Department of Neurosurgery.

He had spent a significant portion of his neurosurgical fellowship in a lab and not in surgery. His defense team contends that he should never have been allowed to graduate.

In the space of about two and half months, Duntsch botched the surgeries on three patients at Baylor Regional Medical Center of Plano. Jerry Summers, his friend and then-employee, was left a quadriplegic. Schoolteacher Kellie Martin bled to death. By the time he resigned in April, Duntsch had already had his surgical privileges taken away from him.

Testimony has shown that Baylor gave Duntsch a letter that allowed him to get surgical privileges at Dallas Medical Center.

“I would be very disappointed by that,” Bagley said. “It’s akin to kicking the can down the road.”

Bagley testified that instead Baylor should have reported him to the national practitioner database, as well as to the Texas Medical Board. The defense attorney asked Bagley why a hospital not want to make an “adverse action formal?”

“Sometimes it’s the feeling that your quote ruining someone’s career or livelihood,” he said. “Sometimes it’s concern for litigation. That’s the fear that hospitals and their legal team has.”

Bagley says hospitals make a lot of money from neurosurgeries. Lots of hospitals are competing for doctors and patients.

“It’s a very competitive environment and there’s pressures on hospitals to make their bottom line,” Bagley said. “Hospitals are competing for surgeons and they are hesitant to potentially alienate a surgeon and I think that’s a problem in our market.”

He also said tort reform may also be part of the issue so hospitals don’t feel as much threat from malpractice claims. Tort reform strictly limits the damages that patients and their families can get from botched surgeries.

After he left Baylor, Dallas Medical Center gave Duntsch temporary privileges in 2012. Duntsch lied to the hospital about the circumstances of his departure from Baylor. Defense attorneys say the hospital didn’t do its due diligence on Duntsch, either.

His first surgeries there would go terribly wrong.

“The lady died from an operation that she didn’t need,” neurosurgeon Martin Lazar said of the surgery on Brown. “How egregious can it get?”

Bagley had nothing good to say about Duntsch’s surgical skills. He described them as “very poor.”

At any given time, he said, neurosurgeons are just millimeters from disaster. Bagley compared it to “tap dancing on a razor blade.”

“It’s a field where millimeters make the difference,” he said.

Duntsch, for his part never acknowledged having done anything wrong in his post-operative reports.

“The surgeries that were performed – I don’t a politically correct way to say it – but they were very, very poor,” Bagley said. “My whole summation of all this is this is a complete and utter failure of the entire system of checks and balances and for the safety of patients from start to finish.”

However, Bagley did agreed with the defense that there are less obvious ways to harm a patient than to botch a surgery.

Closing statements are scheduled for Tuesday morning. Then Duntsch’s fate will be in the jury’s hands.